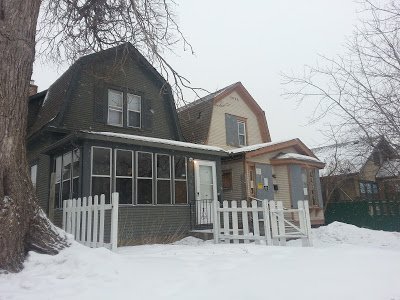 The newly-proposed conservation district ordinance should excite me. Either the preservationist in me should leap for joy that neighbors may have another tool available to preserve the character of their community, or the libertarian in me should bristle at the prospect of fewer property rights. Instead, I’m left shrugging my shoulders and responding with a resounding “meh.”

The answer back then was essentially, “Well those are really good questions and we’ll have to think about it.” So I shouldn’t be all that surprised at the lack of a tangible benefit for north Minneapolis here. Oh, sure places like Old Highland or parts of Willard-Hay could use this to their benefit. But just like more established neighborhoods throughout the city, residents in those areas area already well-organized, more affluent, and more capable of such preservation without a conservation district.

Bill Lindeke of the Streets.mn blog does an excellent job deconstructing some problems with the ordinance as it was proposed. And while I don’t agree with every point he made, the part that really resonated was the question of who gets a voice. A study could be initiated by 1/3 of the property owners in a proposed district area. After the study, it would take 2/3 of the property owners to bring that conservation district into being.

Again, I submit to you that in north Minneapolis, any area that has historic character in need of preservation *and* two-thirds of property owners who would be supportive of a conservation district is already at a point where such districts are not entirely necessary to protect those communities and those houses. The question of renters vs. owners, as Lindeke raised, might not even come into question if enough properties were owned by local governments and non-profits.

Which brings us back to 26th and Oliver: There are thirty parcels of land on that block, and ten are homesteaded. (A number I actually found surprisingly high.) The City of Minneapolis, Hennepin County, and Greater Metropolitan Housing Corp. own multiple vacant homes and/or vacant lots on the stretch. Everything else is a non-homesteaded rental or vacant building. Two units are owned by Mahmood Khan, one by Keith Reitman, another by Stephen Meldahl, and a sixth by James Swartwood. (Swartwood is not generally regarded as a slumlord, but he is a landlord who associates with a group that pushes for fewer housing regulations – an important connection in consideration of this ordinance.)

Even if that block got far enough to vote on a conservation district, does Hennepin County get two votes? Does CPED get three? Who from GMHC would be designated to vote, and vote a second time? Even if all homesteaders stood united, they would still make up only a third of the votes needed. Does anyone really think that some of the more infamous landlords would voluntarily restrict their options here by supporting a conservation district? It’s almost certain that the city and the county would not, and I wouldn’t blame GMHC if they were to follow suit. So right off the bat, the numbers just don’t work for a block like 26th and Oliver to benefit from such an ordinance.

The irony here is that north Minneapolis has seen a disproportionate number of housing demolitions in the city over the last few years, and that trend is still continuing. So now a conservation district feels too little, too late. Furthermore, the ordinance itself (yes, I read the whole thing) basically inserts language into city regulations surrounding historic designation. While it adds or adjusts language surrounding housing features, it makes no material changes to the sections dealing with demolitions. So if I’m reading it correctly, a conservation district ordinance would–appropriately, one would hope–impose rules on what kinds of exterior alterations could be made to a property, but without historic designation houses would be just as easy to tear down as they’d be without the district in place. Perhaps I am misunderstanding the bureaucromancy of this document, but that’s my interpretation.

(Yes, I know bureaucromancy is a made-up word, but it applies here and I like it.)

On the plus side, the element where a study is performed does lend a degree of objectivity to a conservation district determination. Unfortunately, the loss of housing stock through demolition and the loss of housing features through inadequate rehab work makes it less likely that areas of north Minneapolis will meet conservation criteria or reap benefits from any changes.

Robin Garwood wrote a fine counter-point to the Streets.mn post about such districts, but overlooked what is the most important piece to me. And that would be equity. (“Equity is Not Just a Buzzword” is my next blog post, hyperlink to be added upon completion.) The conservation district ordinance, as currently written, does nothing to narrow gaps between north Minneapolis and other parts of the city. My internal debate about this began with the concession that perhaps conservation districts aren’t the right tool to accomplish such lofty goals. But if we as a city aren’t going to be intentional about incorporating actionable principles of equity into new initiatives like this, then economic and racial gaps will persist.

Although I like much of what the ordinance does and aspires to, I can’t support it until I can be convinced that it can be used to benefit my community.