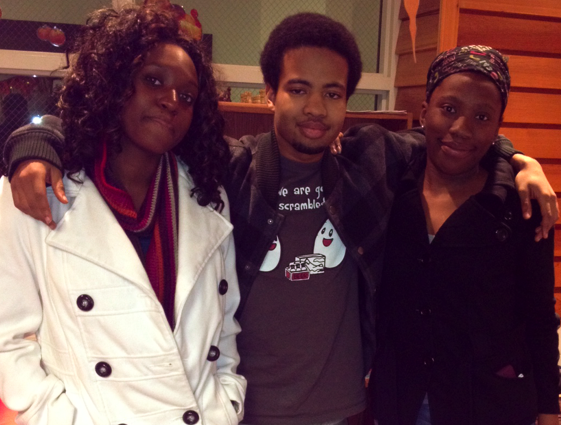 From left: Lina, DeVante and Tiffany at Connections to Independence

Contrary to how most people view it, Tiffany — a teen who’s just become familiar with the foster care system — says it’s the best thing that’s ever happened to her.

Making the shift was a dream come true she says — as was becoming a participant of Connections to Independence (C2i). The South Minneapolis-based non-profit assists youth in foster care ages 15-21 to transition to an independent lifestyle as they age out of the system.

“People have their own opinions, but with me it’s like I’m in a whole different world. I’m living in a dream world I always wanted,” Tiffany, 19, confessed.

Had not it been for Minnesota’s Fostering Connections to Success and Increasing Adoptions Act of 2008, Tiffany’s current situation wouldn’t be the same. Before it was implemented, youth would age out of the foster system at age 18. Now some have the option of staying until age 21 and C2i encourages their youth to do so.

C2i executive director Jessica Rogers would like to work with young adults up until age 24, when most have a firm grasp on where they’re headed. Because she was pulled out of foster care and adopted at a young age, Rogers knows it’s tough for an 18-year-old to be on his/her own.

In 2010, the Christian Science Monitor reported that close to 40 percent of kids who have aged out of foster care have been homeless at some point.

Though Tiffany’s only been a part of C2i for two months, she said she greatly appreciates the family environment, classes and workshops, such as the one that took place a few weeks ago about loving yourself and identifying others who do as well.

“We can teach our kids how to get jobs, go on to post-secondary and how to get apartments,” Rogers said. “But if they’re not healthy mind, body and soul, how are they going to sustain those things long-term?”

Ten years ago C2i began its run at Summit Academy OIC in North Minneapolis. .  Since its founding, C2i has been on a revolving contract from Hennepin County, which still provides funding.

When other programs began to overshadow youth development, C2i moved into another part of Summit’s building, operating separately. In 2009 the Summit Academy Board of Directors and Summit CEO Louis King decided to end the program.

Re-registering and re-launching in July 2010, under Rogers’ direction, C2i stays aligned with a special wellness philosophy and heavily supplements the efforts of social workers.  The program also aims to stabilize their youths’ placements. With 43 youth enrolled and capacity for 55, C2i reports that most of the young adults who participate in its programs have lived in 4-5 foster homes.

Lina, 17, has lived in more than 30.  Born into the system, her mother didn’t lose parental rights until she was 11 years old. Still, Lina managed to graduate high school early. Thanks to C2i showing up at a very important court date and helping her find transitional housing, Lina is now legally emancipated, working and living on her own.

“Being through the system was not successful,” Lina said in regard to foster care derailing her life. “I’ve always been a very willful person. I don’t like authority and I don’t like people telling me what I should and shouldn’t do. Especially when I feel it’s not right, like medicine and therapy that I didn’t need.”

Lina began participating in C2i when she was 13. And although she continued to move around, she said the program was one of the things in her life that remained stable.  In foster care, she remembers not being able to make many personal decisions. She also remembers being in placements where locks sealed the refrigerators. Now living in transitional housing, she’s glad to be able to grocery shop, clean and schedule everything in-between on her own time.

Every Friday, the organization does a group activity outside of the office walls. Many of the activities are outdoors to encourage a sense of self in an environment void of common distractions.

“We always relate it to what we’re talking about; that all ‘about me’ aspect of learning. It’s learning what your likes and dislikes are without someone telling you what they are,” said C2i’s program manager Michelle May. “When the summer hits, we’re anywhere and everywhere.”

May and independent living skills counselor/operations coordinator Talicia Jackson are behind workshops and classes that they and outside youth advocates run. Jackson thought up the idea of having a men’s cooking class for students like DeVanté, 19, who not only need the knowledge but are looking to further it in culinary school.

Currently earning the last of his high school credits, DeVanté, a four-year C2i participant, is looking to pursue a career in graphic design, culinary and/or auto mechanics. He and his 15-year-old sister attend the program 2-3 times a week taking advantage of workshops pertaining to personal finance and development.

“The ‘laugh now ‘part is me putting on a face to cover up the pain. I could be joking around like everything’s okay, but later on I’ll be hurt somewhere where no one will notice,” he said explaining the comedy/tragedy drama faces tattoo on his left arm. On the other arm are the words “Family first”  —  “Because I put my family before anything,” he said.

On Valentine’s Day 2008, DeVanté was pulled from his eighth-grade class and brought into a room with two sheriffs. They explained that he would be taken into foster care. After gathering his things in the back of a police car, he went with them, finally arriving at St. Jospeh’s Home for Children. Two weeks later he moved to a foster home in North Minneapolis.

“C2i helped me to analyze my situation, why it happened and to stop blaming myself for the reason I was taken,” DeVante` said.

C2i’s all-nighter activity makes him smile just as intensely as memories of an unsupervised visit with his mother two Easters ago.  Last year, the group started off with a movie then headed to downtown’s Block E, eventually settling at a rec center where they were free to play basketball, games and swim until 5 a.m.

Back in 2009, C2i’s program manager Rogers was given an ultimatum. She could watch the program go to another non-profit and hope to be a part of it or she could redevelop it herself.

“I could of remained in foster care for years like a good number of our kids did. To give these kids a little bit of what I was blessed with is why we replicate a family environment,” Rogers said. “So I gladly took on the challenge.”