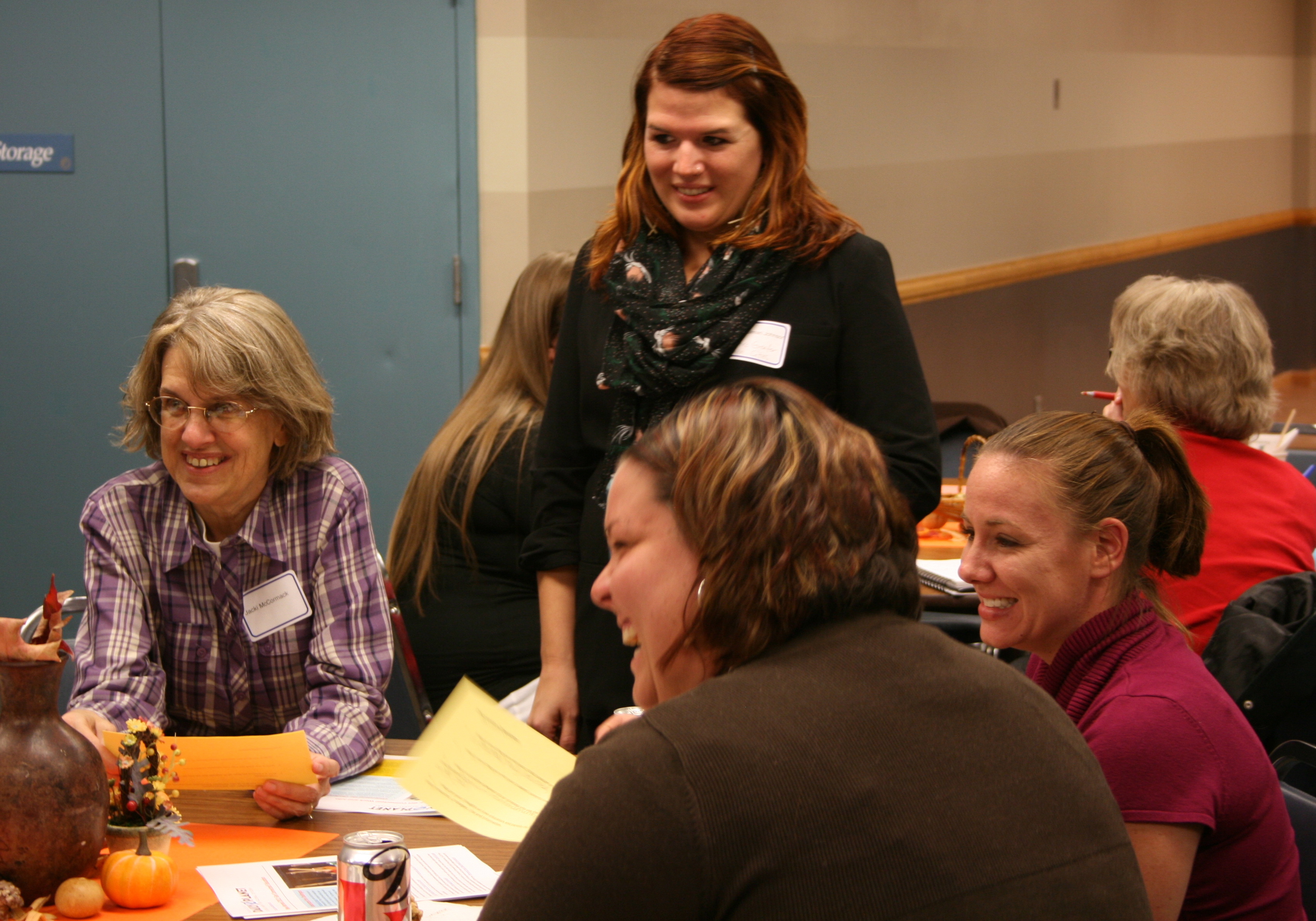 Educators, psychologists, social workers, and behavioral therapists were all part of the mix. Moms, however, comprised the largest portion of the audience at an October 8 Get Connected! community meeting focused on the importance of addressing challenging behaviors early in life. This helps children with intellectual and developmental disabilities experience full inclusion as they grow up, then fit more successfully into the workplace as adults, participate fully in the community, and lead happy, productive lives.

The Get Connected! event was an opportunity for parents, professionals, and others interested in the issue, to learn more, hear success stories, and connect with one another. Hosted by The Arc Greater Twin Cities and Twin Cities Media Alliance, the event was held at the St. Louis Park Rec Center.

Serving individuals and families through all stages of life

The Arc Greater Twin Cities is a chapter of The Arc Minnesota, a non-profit, statewide voluntary organization. Since 1946, The Arc has been providing information to people with developmental disabilities and their families, steering them to resources, and serving as an advocate. While originally designed to serve only children, The Arc now works with people of all ages and with many types of developmental disabilities, including intellectual disabilities, Down Syndrome, autism, cerebral palsy, and fetal alcohol spectrum disorder.

According to its website, “Arc is different from other organizations in that it is concerned with the total life of an individual, from birth to death, and with all services or needs an individual and his or her family may have.” Half of The Arc’s budget comes through thrift revenue it earns by operating Arc’s Value Village.

At the Get Connected! meeting, Anne Roehl, program director for The Arc Greater Twin Cities, noted that if children exhibit challenging behaviors and have a hard time interacting well with others in their early years, it will have a lifelong impact, carrying over from school into the work setting. As a result, much of The Arc’s work focuses on making schools and communities more welcoming and altering systems that are in place. This involves forming relationships with family members and working with them in tandem with teachers and other school personnel.

Dr. Tim Moore, from the University of Minnesota’s Institute on Community Integration, highlighted why schools need to work on positive behavior supports and develop positive reinforcement practices. Mary Hunt from the Minnesota Department of Education explained what an important development this has been historically. Beginning in the 1990s, the approach known as Positive Behavioral Interventions and Supports, or PBIS, has dramatically shifted school disciplinary practices, said Hunt. School environments have been redesigned to be more welcoming and to lend support to all, which increases the likelihood of behavioral and academic success. 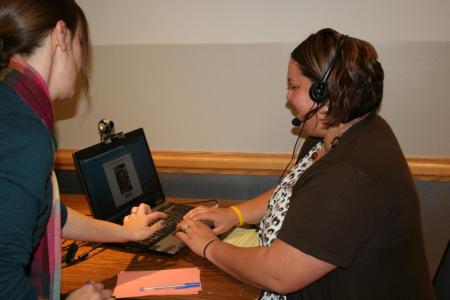 Anne Roehl explains the ins and outs of FlipGrid

One of the main elements distinguishing PBIS from other approaches, Hunt said, is that it provides a set of practices that students, staff and families are all working with. PBIS also recognizes that schools are part of a larger system that extends beyond the classroom. This means teaching social skills and providing behavioral examples in non-classroom environments.

Key features of PBIS include: Setting clear, consistent positive expectations; teaching and practicing those expectations throughout the entire school; systematically recognizing when the expectations are being demonstrated well; being clear about the continuum of consequences.

Currently, more than 300 Minnesota schools, 15.6 percent of the total statewide, have implemented PBIS. The number grows each year because results show that reductions in behavioral problems and suspensions leave more time for learning.

Karre Zahn, mother of a 13-year-old autistic son, Dustin, stressed the value of having the right supports and strategies in place, and of family members and schools working as a team, to turn things around. Family involvement is critical, she said, with members being trained in the same way teachers and staff are. Consistency in how behaviors are approached builds trust, she added. With such an approach, everyone is accountable for Dustin reaching his goals. “Now he’s soaring,” Zahn said.

The Anoka-Hennepin school district is the first in the state to offer Parent-Child Interaction Therapy, or PCIT. Mary Lundeen, an early childhood special education teacher for Anoka-Hennepin’s Early Intervention Program, lauded PCIT’s strategies for empowering parents in their parenting, especially when faced with behavioral problems and parent-child conflicts.

Parents and children who participate in the program meet weekly with Lundeen, a licensed psychologist, to develop new interactions. These interactions come from adapting new rules, or “do’s” and “dont’s.” “Do’s” include appropriate ways to praise or repeat as a way to encourage or reinforce certain behaviors. Instead of commanding, criticizing, or questioning, all of which are “dont’s,” ignoring minor bisbehaviors is emphasized. According to Lundeen, consistent ignoring reduces attention-seeking behavior.

Lundeen showed how a video system allows her to observe parent-child interactions and the integration of new rules and skills. After viewing interactions this way, she is able to offer parents feedback. Lundeen has said that, “When children can self-regulate and see adults as caring, safe and predictable, the whole world opens up to them. They won’t walk into someplace and start to throw things or cry. They come to rely on adults and they can do well with new people.” Lundeen works with children and their families in schools and day care facilities, as well as in public settings, such as shopping malls.

Jessica Peasley, the mother of Caleb, remembered being “freaked out at first” by the whole idea of PCIT. But she said she noticed changes in Caleb’s behavior immediately after the family began working with Lundeen. The consistency of rules was key. Caleb is now doing extremely well in kindergarten. “It’s changed our lives.”

Becoming part of a wider community

Following additional observations by Mary Clarkson, director of special education for Anoka-Hennepin School District, attendees were invited to share their wisdom by filming short videos via a developing technology called FlipGrid, and in small group conversations. Then, Marcos Lopez-Carlson, neighborhood engagement coordinator for the Twin Cities Media Alliance, described some of the merits of new media for broadening the number of connections parents and others have with those sharing their experiences and concerns. 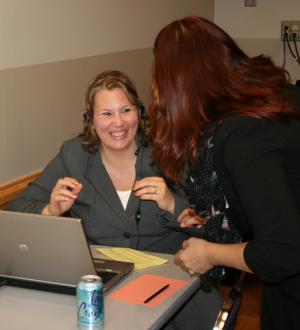 Karre Zahn is instructed on how to make her video

Nearly everyone in the room had a Facebook account, but very few were on Twitter. Facebook has value in keeping people connected with those they already know, and in some cases may wish they didn’t, Lopez-Carlson joked. Twitter, he said, is much more valuable when it comes to connecting individuals with those “they don’t know but want to know.” He demonstrated how easy it is to search for others who share the same interests, or are talking about an issue, and even live within a specific geographic area. Through his search he discovered that someone in the metro area had recently produced a play that people at the Get Connected! event would want to know about.

Get Connected! community meetings are part of a larger project of the Twin Cities Media Alliance and Daily Planet. With support from the Bush Foundation, each Get Connected! event is planned and co-hosted with nonprofit organizations that work on one of six issue areas: education, work, health care, immigration, transportation, and the environment. Get Connected! meetings are scheduled through October. They culminate in an annual fall media forum scheduled for Saturday, November 10, at UROC, the University of Minnesota’s Urban Research and Outreach-Engagement Center.