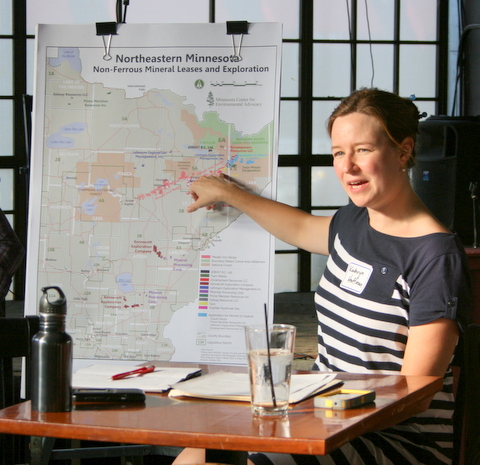 By the time an environmental decision is opened for public comments, it’s often too late for citizens to have an impact. Decisions have already been made, mostly behind closed doors. The public process becomes little more than window dressing, a hoop that must be jumped through.

At a Twin Cities Media Alliance (TCMA) Get Connected! event held at Cause Spirits and Soundbar on August 21st, attendees were introduced to the Minnesota Center for Environmental Advocacy (MCEA), a nonprofit membership organization that wants to see that change.

Over a happy hour spread, MCEA staff attorney Kathryn Hoffman told Get Connected! attendees about new threats to the Boundary Waters Canoe Area, Lake Superior, the water supply, and natural habitats. She also described the thinking behind MCEA’s Mining Truth campaign, designed to inform the public about those threats.

TCMA’s Marcos Lopez-Carlson introduced several new media tools that are capable of connecting citizens and environmental advocates, helping them to organize more effectively, and ultimately allowing them to have a greater impact during the stages when crucial decisions are made.

Established by a group of attorneys in 1974, MCEA works with the legislature, courts, executive branch, and governmental agencies to advocate for, strengthen, and enforce laws protecting the environment. Its staff, comprised mainly of lawyers and policy experts, prides itself on working across sectors—private and public, profit and nonprofit, political and academic—to form partnerships. The organization is frequently consulted by legislators seeking to resolve complicated issues. For citizens wanting to communicate their stand on environmental issues to policymakers, it’s important to have a credible source of information. That’s another of the roles MCEA plays.

The Mining Truth campaign, launched by MCEA, Conservation Minnesota, and Friends of the Boundary Waters Canoe Area, aims to inform Minnesotans about sulfide mining and two mines that have been proposed, one near Lake Superior, and the other near the BWCA. Only five percent of Minnesotans know about the proposed sulfide mines, according to Hoffman. To help heighten awareness, the coalition partners have purchased billboard space along I-35 from the Twin Cities to Duluth throughout the summer.

A website, MiningTruth.org, serves as an online resource for sulfide mining-related news and information. Mining Truth has also set up a Facebook community where people can exchange ideas and opinions. In addition, the partners have organized face-to-face community events, and produced the Mining Truth Report, “a comprehensive, resource guide that provides third-party data, research and information about sulfide mining.” 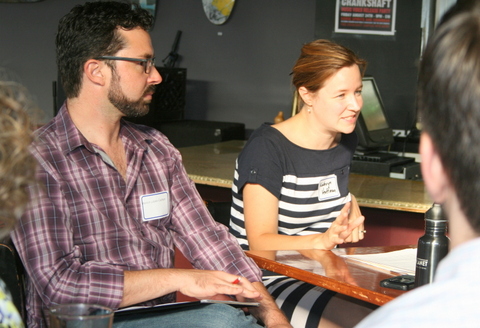 “Jobs at what cost?”

Hoffman explained that the intent of two mining companies, PolyMet and Twin Metals, is to mine metals such as copper, nickel and gold. Such mining results in dangerous byproducts, including sulfuric acid, and toxic contaminants, such as arsenic, that threaten water supplies. Because of its environmental impact, she called sulfide mining “a different beast” from other forms of mining.

According to John Myers, writing for Minnesota Conservation Volunteer Magazine, “perhaps the biggest concern surrounding copper mining is the potential for polluted runoff into waterways. Unlike iron ore, which is mined from mostly benign less-reactive rock, copper is usually found in sulfide-ore bodies. When exposed to air and water, sulfide-bearing rock generates sulfuric acid, which must be managed, if it is in high enough concentrations, so that it does not lead to acidic runoff.”

Neither of the companies proposing mines for the northeastern part of the state is a Minnesota firm, said Hoffman. She acknowledged that about 360 jobs would be created, but added that the majority would be created for people coming from outside Minnesota.

If the mines last 40 years, Hoffman said, people must ask themselves: “Jobs at what cost?” Taxpayers will bear the brunt of cleanup costs. “We’ll be paying the bill,” which will come to millions of dollars. Destruction from digging up wetlands will have a dire impact on habitat.

With good information provided early enough in the process, members of the public can write letters-to-the-editor, Hoffman said, something that agencies pay attention to.

A “new normal” for environmentalists

MCEA’s executive director, Scott Strand, noted that environmentalists always face an uphill battle. Industry people have an advantage, he said, “because they’re always there.” They have the staff on payroll to have a constant presence before decision-makers. “We just have our merry little band.”

Another challenge, according to MCEA legislative director, Allison Wolf, is that the most pressing environmental issues today are not as dramatic as those of the past. They tend to be more abstract, like global climate change, or are geographically remote from major population centers, like the BWCA. This makes it more difficult to rally the public and “get them on board.”

Making things even more difficult, said Strand, is that business has taken advantage of a lingering economic downturn to press its “environment versus jobs argument.” According to Strand, “As the economy goes down, people are more inclined to prioritize jobs over the environment.” Then it becomes a tougher task to explain why environmental protection is important to the economy.

Getting the message out, keeping stories alive

Hearing how important compelling images are to effective environmental messaging, Marcos Lopez-Carlson, Twin Cities Media Alliance’s neighborhood engagement coordinator, talked about the growing potential of new media tools, like Instagram, Pinterest and Flickr, all of which have a core visual component. Images that are widely shared call attention, stir up conversations, and keep a story alive, he said.

Asking open-ended questions about something on Facebook or Twitter is another way to draw interest, said Samantha Chadwick, preservation advocate for Environment Minnesota.

Nearly every public figure has a Twitter account, according to Lopez-Carlson, and many, including Gov. Mark Dayton and Minneapolis Mayor R.T. Rybak are avid users of social media, Facebook, for example. Because of that, Facebook and Twitter can be effective supplements to more traditional letter-writing campaigns, and a primary way to connect with decision-makers.

For those eager to find and connect with others who are talking about an idea, there’s nothing comparable to Twitter, said Lopez-Carlson. Through Twitter, he added, it’s simple  to discover and follow the people you don’t know, but want to know. In this case to identify who is tweeting about mining. Chadwick, of Environment Minnesota agreed, pointing out that Twitter and Facebook are especially valuable tools for contacting and organizing large numbers of people.