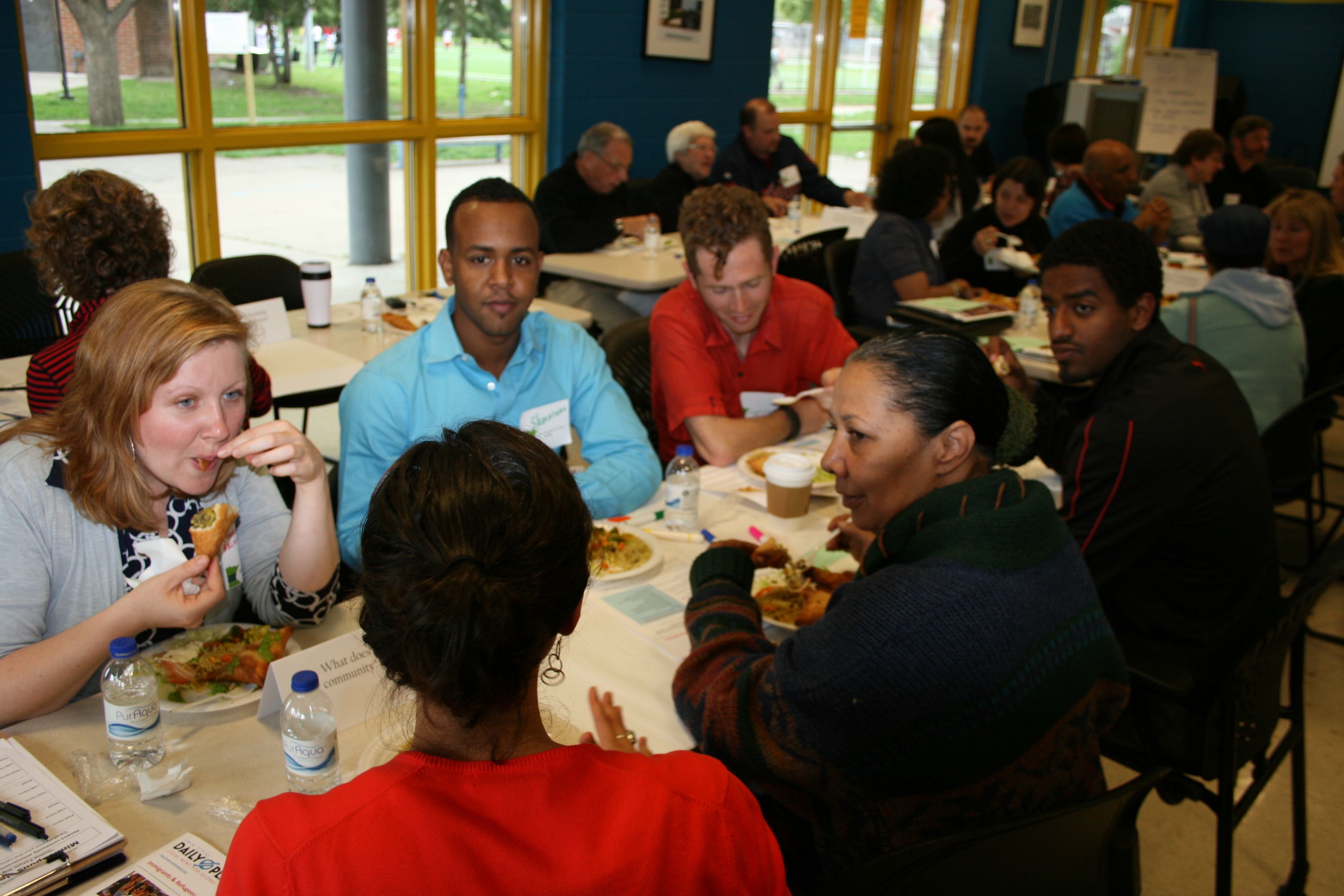 The community room at the Brian Coyle Center was full and the conversations animated. Aromas from a delicious array of dishes from nearby Sahara Restaurant wafted through the air. The event was Welcome to Minnesota: A Conversation about Immigration and Human Rights, which prompted people of many backgrounds to come together to learn new ways to connect around immigration issues and share informaton and stories through new media tools.

One Voice project: How welcoming is Minnesota?

The Advocates for Human Rights, celebrating its 30th anniversary next year, devoted most of its portion of the evening to the One Voice Minnesota Network, a new initiative to end anti-immigrant bias in Minnesota by monitoring, documenting, and evaluating the extent to which people are welcomed in Minnesota. The goal is to gauge how fully human rights are being respected and then to bring about change. This is essential, it was stressed, because Minnesota is experiencing dramatic demographic change, a challenging process.

Questions posed by the facilitator focused on what makes a community or state welcoming. Through a series of small group exercises and exchanges, the meeting’s participants, many of them recent immigrants or refugees from African, Central American, and Asian countries, talked about their experiences in Minnesota. Amina Saleh, a community organizer and Somali refugee, told of stereotyping she’s experienced, such as being seated next to a passenger on an international flight to Europe who shook in fear the entire time. Martha Hernandez, a native of Nicaragua, described the constant ethnic profiling she encounters in her Southern Minnesota town, including on everyday shopping trips. 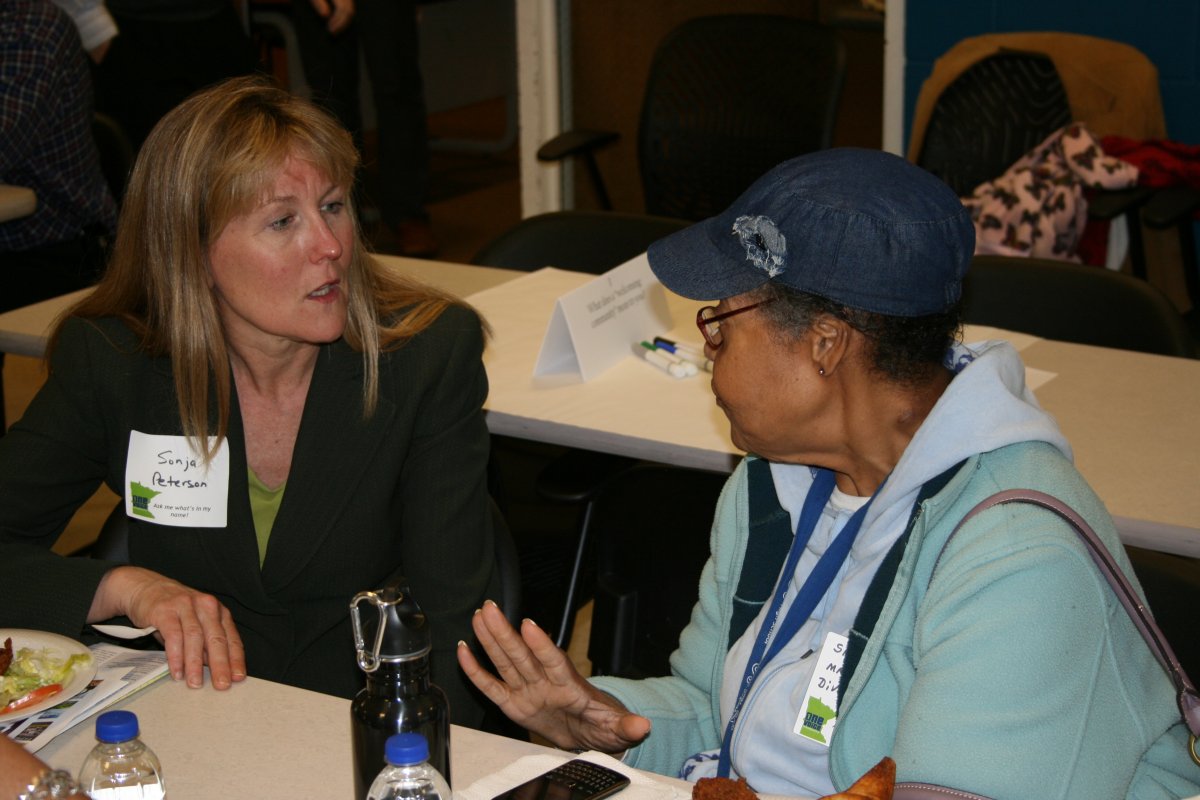 Participation in the One Voice monitoring project was promoted as a key way that people can become more fully engaged in advocating for the human rights of immigrants, refugees, and all Minnesotans. Opportunities include giving a statement, arranging a community conversation with The Advocates’ materials, becoming involved in a fact-finding project, monitoring media, observing the legislature, and interviewing fellow Minnesotans. Conveying stories as a way to help shift the narrative and change policies that are too often structured in an “us versus them”, “citizen versus ‘alien’” way was said to be an essential part of creating a more inclusive state, one that treats all people with dignity.

New ways for everyone to tell their stories

The Twin Cities Media Alliance presentation that followed highlighted how new media tools provide “a new way to tell your story.” Whereas old media—print publications, radio, and television—circulate only one way, out to the audience, new media is interactive and participative, allowing those who use it to be producers, not just consumers, of news and information. In this way new media is more democratic than the old. Everyone who uses it becomes an integral part of the story. Examples cited were citizen journalism, blogging, Facebook, Twitter, and the Twin Cities Daily Planet, each of which allow people to convey important information and share stories not typically found in traditional media sources. How those tools fit together and work together was also illustrated.

Some of the pitfalls of new media, including the potential for toxic comments, the spread of misinformation, and prevalence of “trolls,” active online communicators who crave conflict, were also covered. 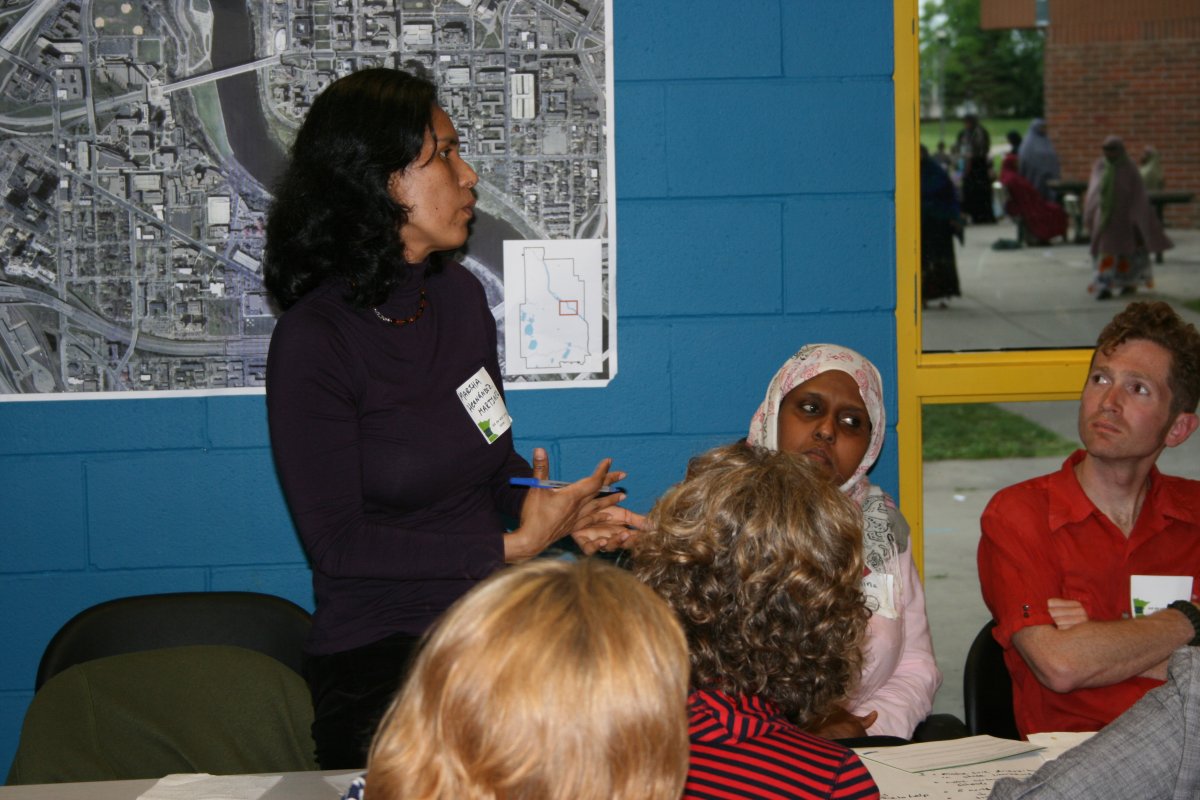 Perhaps the most frequent piece of feedback shared at the end of the evening was that it was too short. Fortunately, other opportunities to learn about ways of connecting around immigration and immigrant rights issues will be announced soon. And for those interested in becoming more skilled at utilizing online tools, the Twin Cities Daily Planet regularly offers new media classes, social media clinics, and newsroom cafés. Several who attended the meeting at Brian Coyle Center said they planned to sign up.

Co-sponsored by The Advocates for Human Rights and Twin Cities Daily Planet, this community meeting was the kickoff of New Normal 2012: Get Connected!, the first of 18 such events scheduled to take place between now and October. They’re a major part of the second phase of a project begun last year, organized by the Twin Cities Daily Planet with support from the Bush Foundation.

While last year’s New Normal: Deciding Community Priorities in a Downsized Economy conversations identified the challenges posed by economic crises and the main solutions being offered, this year’s focus is on connecting the public to organizations like The Advocates for Human Rights that provide opportunities for civic engagement around one of six issues. Those issues are education, work, health care, the environment, immigration, and transportation. A second key component of each Get Connected! meeting is a presentation on the importance of utilizing new media tools as a way to connect with others around important issues, stay connected, and share information and stories more effectively.