A large group of educators and concerned citizens gathered at Ramsey County Library, Roseville, on October 1 for a Get Connected! meeting on education. Those attending the Twin Cities Media Alliance-sponsored event represented several area school districts, including Burnsville, Osseo, Apple Valley, Savage, Stillwater, North Branch, Minneapolis, Mounds View, and St. Paul. They heard Parents United for Public Schools’ executive director, Mary Cecconi, offer a passionate presentation about what’s become a “new normal” for public schools. She contended it’s time to move on to the next iteration of public schools. However, before that can happen, she said, we must determine who will be responsible for designing a new system. Marcos Lopez-Carlson, who followed Cecconi, showed attendees how to use new media tools to amplify their message and become more effective public school advocates. 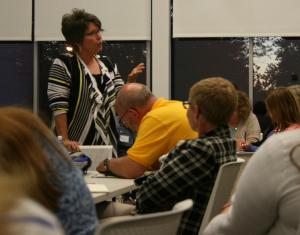 A “new normal” for public schools

Cecconi set the context. As the amount of state aid to education has plummeted, school districts have come to rely on tax levies. In 1990, 47 percent of the state’s school districts had levies in place. By 2011, that figure had jumped to 90 percent. What this means is that the “Minnesota Miracle,” the idea that equal education will be funded by sharing tax dollars with school districts across the state, has fallen by the wayside.

Other changes have occurred simultaneously. In the 1990-91 school year, 91 percent of students statewide were white. By the 2009-10 school year, that figure was 75 percent. It’s estimated that by 2025, the majority of students in Minnesota’s schools will be students of color. This is significant for several reasons, including that the percentage of children who are kindergarten-ready varies widely by race and ethnicity. In Minneapolis, Cecconi said, 94 percent of white kids are kindergarten-ready versus 36 percent of Latinos, meaning that the gap in learning and achievement starts early. How well students perform in school and how far they advance with their education affects their chances of employment and subsequent earnings.

Paying attention to who is funding reform

At this point, Cecconi warned, corporations are entering into debates about education reform, along with foundations, nonprofits and the political parties. They are doing this largely through ALEC, the American Legislative Exchange Council. She emphasized how crucial it is know who is paying the bill for educational reforms and stressed that the public must assume a larger role.

Corporations like Koch Brothers Industries, WalMart, and Bank of America, fund ALEC and deliver to state legislators changes to laws that benefit the corporate bottom line. Corporations, alongside conservative Republican legislators, vote to approve “model” bills. Legislators then introduce those ideas as their own, without divulging the role played by corporations and their allies—for example, the Heritage Foundation, American Enterprise Institute, and Cato Institute—in crafting them. Cecconi noted that corporations pay dues of thousands of dollars (in some cases they’ll provide grants in the millions) whereas legislators pay a nominal amount of $50 a year to belong. Currently, hundreds of ALEC-crafted education bills are being put forward in state legislatures nationwide.

It’s the job of legislators to write legislation, Cecconi said, and in a cash-strapped environment of a downsized economy this means proposing educational “reforms” that don’t require spending. The most popular current reform measures fall under three main categories: “accountability,” which means more testing of students and evaluating of teachers and principals; competition, which focuses on giving schools grades on a scale of A to F, and promoting vouchers, tax credits and scholarships to deal with challenged students; changing governance through expanding charter schools, granting mayors control of schools, and pushing parent trigger laws, that allow parents to intervene if their child’s school underperforms.

These types of “reform,” Cecconi said, fail to take into account the realities that public schools face as they confront shrinking budgets, a consequent reliance on tax levies to fund public schools, and shifting statewide demographics that are resulting in more retirees, fewer taxpayers, and significantly larger numbers of students of color and students living in poverty.

Besides all of that, popular reforms neglect to recognize that twenty-first century students learn differently than students of other periods. She noted that they are “digital natives,” living in a world of Google, Wikipedia, and Facebook; that they also live in a global world, “which is getting flatter each day”; that they are adept at “just in time” learning, as opposed to “just in case” learning, meaning that they know how to find what they need when they need it, instead of learning and storing knowledge, just in case a need might arise at some point; that they respond best to “relevant learning and assessment,” which connects with their own life experiences; that they expect differentiated instruction, that provides them with various paths to acquiring content and is sensitive to different styles of learning.

Engaging the public on multiple fronts

Parents United for Public Schools describes itself as a statewide, grassroots organization committed to Minnesota’s leadership role in providing quality public education. One of the nonprofit’s main tasks, Cecconi explained, is to engage and inform the public about what’s at stake in the current economic, political, and social climate so that people can act to affect change.

To do this, Parents United works on numerous fronts. It interacts with parents, foundations, educators and media to draw attention to how federal and state funding and policy decisions will impact local schools. Its website provides links to articles, and provides announcements about events and Capitol hearings. During legislative sessions, Parents United monitors actions taken by education committees, tracks and analyzes all proposed education legislation, and offers weekly updates. It also builds relationships with the Governor’s office, majority and minority leaders, and the Minnesota Department of Education, while also collaborating with other education advocacy groups.

Parents United for Public Schools stays connected with the public through various forms of new media, too, including Facebook and Twitter.

Marcos Lopez-Carlson of the Twin Cities Media Alliance presented on how new media tools like these allow concerned citizens, parents, and educators to reframe or tell a different story in new ways.

Tools such as Twitter, Facebook, YouTube, and Flickr allow people to share ideas, text, images, and video not just with those who are already in their circles, but more widely. This means that their message is amplified, and they can mobilize people they may not know to take action and affect change. Lopez-Carlson promoted Twitter as the best way to find a community online who share an interest in an issue. He also noted that the St. Paul Public Schools share images via Flickr, and pointed out that various school districts use YouTube videos to share stories and ideas about what has worked for them. He cited that form of sharing as a terrific way to celebrate successes. To access Lopez-Carlson’s notes on how to advance the conversation about education, go to: http://bit.ly/publicschoolexcellence

Get Connected! community meetings are part of a larger project of the Twin Cities Media Alliance and Daily Planet. With support from the Bush Foundation, each Get Connected! event is planned and co-hosted with nonprofit organizations that work on one of six issue areas: education, work, health care, immigration, transportation, and the environment. Get Connected! meetings are scheduled through October. They culminate in an annual fall media forum scheduled for Saturday, November 10, at UROC, the University of Minnesota’s Urban Research and Outreach-Engagement Center.