The 2011-2012 Civil Rights Data Collection from the U.S. Department of Education shows four to five times more African-American students in Minneapolis and St. Paul public schools identified with certain disabilities than any other race. According to the 2011 data, an especially large number of African-American students (mostly male) have what special education experts identify as emotional disturbance, intellectual and specific learning disabilities. These disabilities are defined by the Individuals with Disabilities Education Act (IDEA).

What is Emotional Disability?

An emotional disturbance, sometimes referred to as Emotional Behavioral Disability (EBD), includes a variety of characteristics. According to the National Dissemination Center for Children with Disabilities (NICHCY), for a student to be identified with an emotional disturbance, she or he should exhibit one or more of the following characteristics over a long period of time, “to a marked degree that adversely affects a child’s educational performance:”

(a) An inability to learn that cannot be explained by intellectual, sensory, or health factors.

(b) An inability to build or maintain satisfactory interpersonal relationships with peers and teachers.

(c) Inappropriate types of behavior or feelings under normal circumstances.

(d) A general pervasive mood of unhappiness or depression.

(e) A tendency to develop physical symptoms or fears associated with personal or school problems.

The category of emotional disturbance includes schizophrenia, but does not apply to those who are “socially maladjusted.”

Although the African-American student population is the biggest group in Minneapolis, and second biggest in Saint Paul, the numbers are not big enough to explain why there are so many more Black students identified with emotional disturbance than any other race.

The two bar charts below show the number of students from different races identified as having emotional or mental disabilities in the Minneapolis and Saint Paul public school districts in the 2011 – 2012 school year. 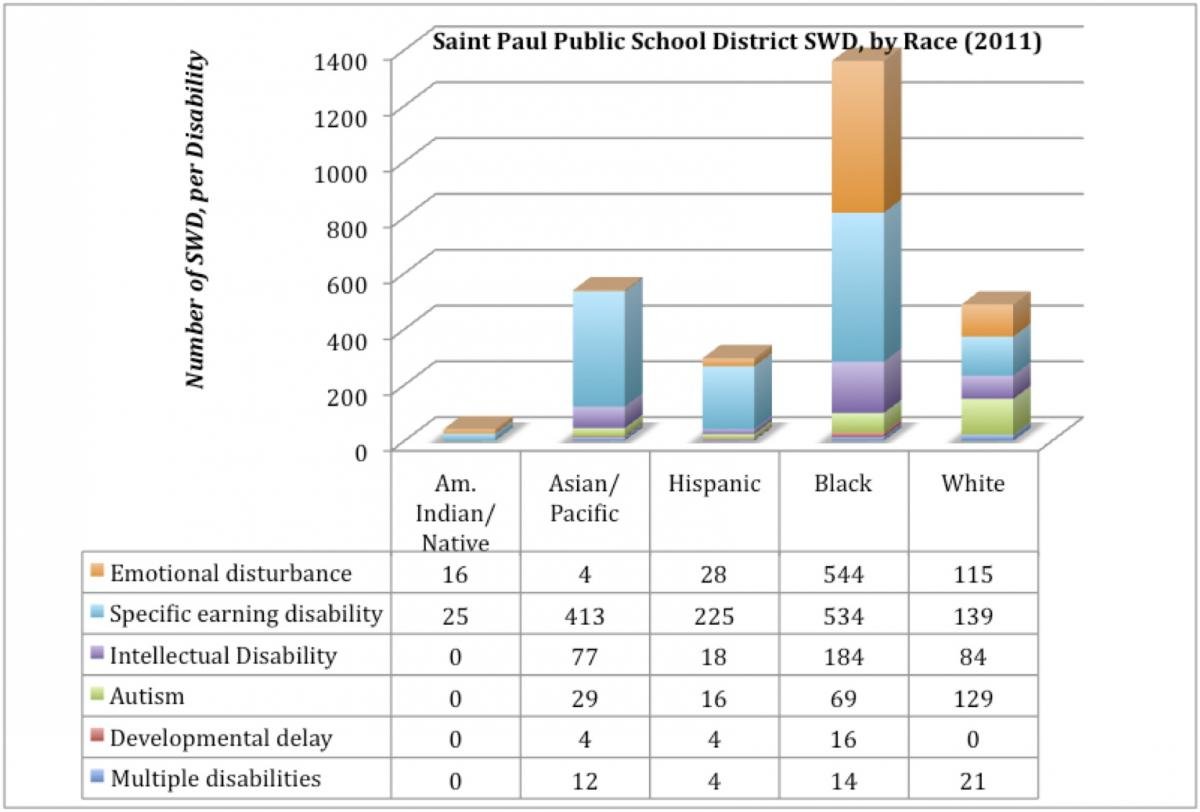 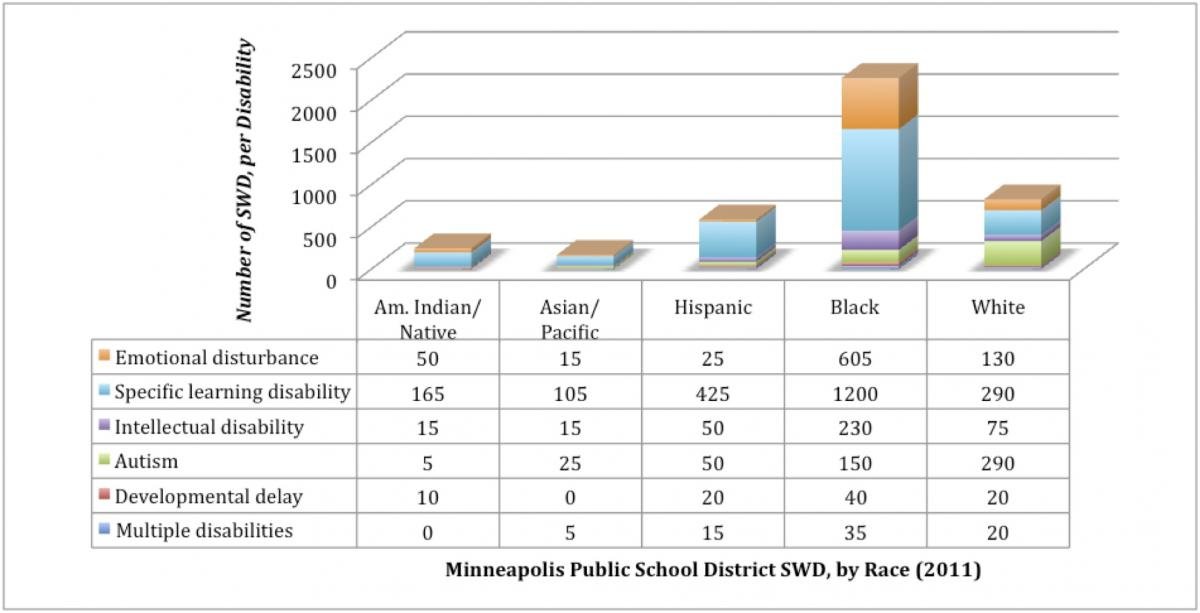 The pie charts represent the percentage of students with disabilities from different races enrolled in both districts in 2011. 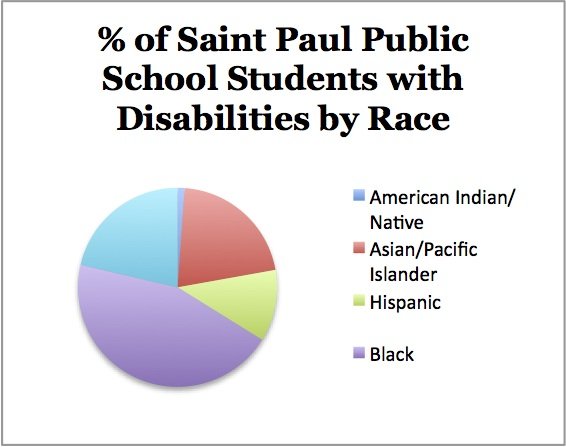 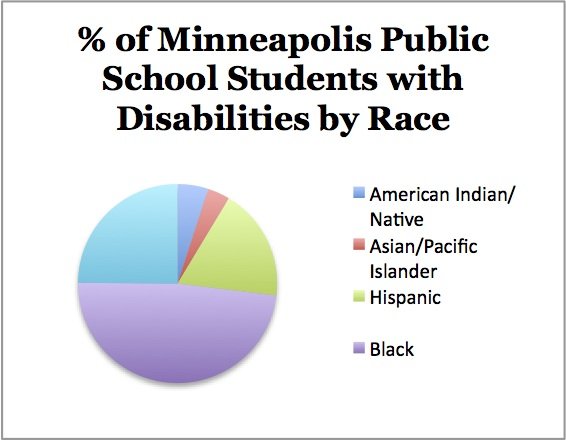 “It is something that [St. Paul] district is looking at right now in terms of why we are over-identifying African-American students,” said Susan Bofferding, an experienced special education teacher, and a member of Saint Paul Federation of Teachers (SPFT), working in the field for over 20 years.

“I think when we are looking at how their emotional behavior affects their learning. We are looking at it through a lens of white middle class and what’s considered proper behavior in a school setting,” Bofferding said.

“[Then] they end up acting out in a school setting because they are being forced into a situation that they are uncomfortable with, or that they don’t understand, that they don’t have a lot of the background knowledge about. It is a foreign environment [for them]. A lot of that acting out behavior, we think of as rebellion to that system that is systemically racist,” she said.

Often, according to Bofferding, smaller educational environments in special education groups can address the needs of students with emotional challenges. For a student to qualify for special education, however, several bureaucratic interventions need to be made, starting from getting a medical diagnosis to figuring out what kind of resources are available to address the learning needs of the disabled child.

“Just because you have special diagnosis does not mean you will automatically get special education,” Bofferding said. Various factors need to be assessed, such as interventions already available in the school building, the resources parents have and whether they can address their children’s special needs so that their child does not have to be labeled with a disability.

According to Chrissy Snider, a mother of four, this system comes with a lot of hurdles in a way that is very overwhelming and unfair to the families who cannot afford outside services. She said the system does not adequately address the needs of students with certain disabilities, such as dyslexia. Three of her four children have been identified as having dyslexia.

“[Additionally], the laws prevent them from accepting kids into the public school [special education] programs unless they are incredibly behind. You have to watch your child fail, and you have to allow your child to get over two years behind before the school system will help. That’s a really hard thing to do, as a parent to sit and watch your child fall further and further behind,” Snider said.

There are 2185 students in Minneapolis, and 1336 in Saint Paul who are classified as having a “specific learning disability,” and African-American, Asian & Hispanic students make up most of this population. This category refers to malfunctioning of basic cognitive processes that help perceive oral and written language. Specific learning disabilities may be manifested in the imperfect ability to listen, think, speak, read, write, spell, or to do mathematical calculations. The term includes brain injury, minimal brain dysfunction, dyslexia, and developmental aphasia, according to NICHCY.

““We find a lot of our students that are identified as special education are students of poverty, and students of color, ” Bofferding said.