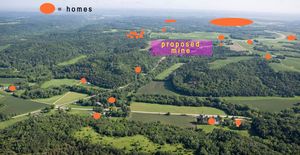 A major investigative report in today’s New York Times on the economic viability of the shale gas extraction industry, Insiders Sound an Alarm Amid a Natural Gas Rush, is closer to home than many Minnesotans might realize.

Just last week, residents in Goodhue County pushed for a moratorium on silica sand mining, the Red Wing Republican Eagle reported in Silica sand mine moratorium still up in the air. Minnesota’s silica sand is a material uniquely suited for hydrofracturing– or “fracking” as it’s called in the slang of the debate–and hundreds of citizens are concerned about the effects of pit mining in their area.

It’s not an abstract fear. I grew up along the Minnesota River Valley near St. Peter, and have seen the way that UniMinn’s mines near Kasota and Ottawa have changed the face of the prairies there.

Or rather, I haven’t seen the changes, given the ginormous berms that hide the pits from the curious.  I can’t say that the walls that shield my eyes from glimpses of Mordor on the Minnesota River are reassuring. Or that they erase the memory of the loveliness that was, what those prairies looked like when I was a girl. 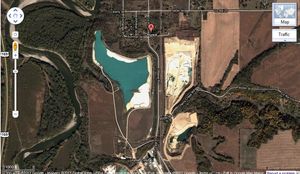 All company hype aside, it’s not an improvement.

So it’s worth readers’ time to check out the New York Times article, which suggests that even within the natural gas industry, experts are questioning whether the rush to extract natural gas will pay for or sustain itself.

The short skinny from Insiders Sound an Alarm Amid a Natural Gas Rush:

Natural gas companies have been placing enormous bets on the wells they are drilling, saying they will deliver big profits and provide a vast new source of energy for the United States.

But the gas may not be as easy and cheap to extract from shale formations deep underground as the companies are saying, according to hundreds of industry e-mails and internal documents and an analysis of data from thousands of wells.

In the e-mails, energy executives, industry lawyers, state geologists and market analysts voice skepticism about lofty forecasts and question whether companies are intentionally, and even illegally, overstating the productivity of their wells and the size of their reserves. Many of these e-mails also suggest a view that is in stark contrast to more bullish public comments made by the industry, in much the same way that insiders have raised doubts about previous financial bubbles.

“Money is pouring in” from investors even though shale gas is “inherently unprofitable,” an analyst from PNC Wealth Management, an investment company,  wrote to a contractor in a February e-mail. “Reminds you of dot-coms.”

“The word in the world of independents is that the shale plays are just giant Ponzi schemes and the economics just do not work,” an analyst from IHS Drilling Data, an energy research company,  wrote in an e-mail on Aug. 28, 2009. . . .

And guess who is  being asked  to help foot the bill with subsidies for the natural gas industry? The Times notes:

If the industry does not live up to expectations, the impact will be felt widely. Federal and state lawmakers are considering drastically increasing subsidies for the natural gas business in the hope that it will provide low-cost energy for decades to come.

But if natural gas ultimately proves more expensive to extract from the ground than has been predicted, landowners, investors and lenders could see their investments falter, while consumers will pay a price in higher electricity and home heating bills.

At a time when renewable energy sources are under scrutiny, it’s important not to give a more traditional source a pass. Read the Times article, which also raises questions about the consequences of frackin on local water quality.

What the reporters don’t consider are the environmental consequences to local landscapes where fracking sand is mined. That’s what’s got people near Red Wing riled up, the Republican Eagle reports:

The moratorium was requested by Citizens Against Frac Sand Mining, a group of hundreds of concerned citizens who have signed petitions and held meetings in hopes of educating the public and ultimately preventing a silica sand mine from being established in Hay Creek Township.

Oklahoma-based company Windsor Permian has started experimental drilling, but has yet to apply for any conditional use permit in order to mine the 155 acres of land it purchased earlier this year.

More than 100 people crammed themselves into a stuffy assembly room – with many trailing out into the hallway – to offer their testimonies as to why silica sand mining should be prevented for the next year.

Citizens presented concerns over a mine ruining the area’s natural beauty and geography, residents developing diseases from breathing in silica dust, water quality being affected and roads being destroyed by trucks hauling extracted sand. Many points were repeated several times as nearly 25 people came forward to share their thoughts and opinions on why a moratorium should be put in place. . . .

Although the number of citizens present at the meeting slowly faded as the hours ticked by, their opinions lingered in the minds of commissioners as they ended the night by tabling the issue until July “due to the volume of information and overwhelming public comment.”

The moratorium will be revisited at the Planning Advisory Commission’s next meeting Monday, July 18. 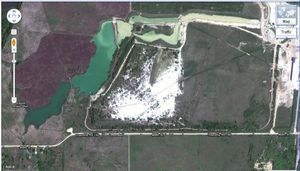 The Star Tribune took a long look at the local mining issue a couple of weeks ago in Silica sand is the new gold. The article didn’t question the vitality of natural gas extraction, and  managed somehow to miss the large pit just south of Kasota. Both are unfortunate omissions, especially considering the historical battle local people waged as Unminn battled for the right to stripmine its Precious. At least one small sliver is left of the prairie that was, where pasqueflowers blossom in the spring. Once there were more.

With the publication of the Times’ report, thoughtful Minnesotans might wonder if all that glitters here is only a new fools’ gold, like the ring that drew the hearts of Middle Earth to Mordor.  The Times article concludes:

Still, in private exchanges, many industry insiders are skeptical, even cynical, about the industry’s pronouncements. “All about making money,” an official from Schlumberger, an oil and gas services company, wrote in  a July 2010 e-mail to a former federal regulator about drilling a well in Europe, where some United States shale companies are hunting for better market opportunities.

“Looks like crap,” the Schlumberger official wrote about the well’s performance, according to the regulator, “but operator will flip it based on ‘potential’ and make some money on it.”

Will Goodhue County’s residents be asked to sacrifice their quality of life for market opportunites that may not deliver the affordable energy future in exchange?

Photo: Diagram depicting the layout of the proposed mining areas and its proximity to homes, via Citizens Against Silica Sand Mining’s Facebook page; used with permission (above); Ottawa from space, Google satellite screenshot (center): Kasota SNA and Uniminn from space, Google satellite screenshot– note that it’s a closer shot than the Ottawa view, and so I left the zoom in/out feature on both screenshots for comparison (below) .