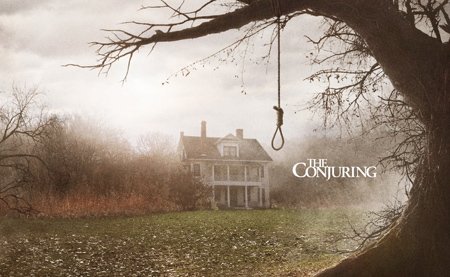 What I’ll Tell You at the Bar:

The Conjuring is effective and will thrill most general audiences. Fans will enjoy the references, but seasoned viewers may feel it suffers in comparison to what inspires it.

What I Really Think (Slight Spoilers):

I was sitting in a bar with a friend of mine before the screening of this film, and he remarked that he couldn’t watch any horror movies because they always gave him nightmares. Honest to goodness-keep-you-awake-all-night nightmares. I told him I was jealous, that the price of being a fan of these sorts of movies is that you get savyy to the cheap tricks pretty fast, which leaves the majority of horror films delivering the memory of a good fright flick at best. If a film can get through my jaded skull and unsettle me, then it is something to be celebrated.

I could go on and on about what makes something really scary, but basically it cuts down to the difference between merely showing something scary and knowing why something is terrifying. John Carpenter knew why Michael Myers was a walking nightmare, Ridley Scott and H.R. Giger knew why audiences would be reached on a primal level by the xenomorph. There’s much more involved than pointing your camera at something freaky looking. 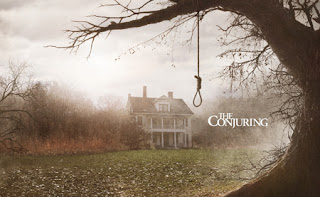 The Conjuring is in many ways a prequel. The demon-busting couple who are the soul of the film, Ed and Lorrain Warren, are the same people who verified the presence of Satan’s dark minions in an old house in Amityville. They are both real people (Ed died in 2006), and both of these films are based on events in their careers. The Conjuring occurs five years before the events in The Amityville Horror, but there is plenty of Amityville to be found in the Perron household.

In 1971, Carolyn and Roger Perron invested everything they had to start a new life in Harrisville, Rhode Island. The house they bought was large and old, as it needed to be to make room for their five daughters. Within the first day of life in the old house, something dark and threatening made itself clearly evident. Things escalated very quickly into violence, which led Carolyn to track the Warrens down at a college lecture on exorcism. As soon as the Warrens arrived at the house, they identified a genuine demonic being. So, they brought all their resources to bear on removing the demonic from the Perron house.

Director James Wan evokes the religious horror classics from the 1970s. Formally, there are many visual echoes of films like The Amityville Horror or The Exorcist. There are nods to other films such as The Changeling and Don’t Look Now. Visually, the film mimics the flashed and desaturated photography that was emblematic of the era. Even the opening title sequence with its long vertical scroll and ominous rising logo could just as easily been created in the late 1970’s. Under the hand of DP John R. Leonetti (Insidious) the film gets the looks right and summons the atmosphere we associate with past cinematic devilry.

The Conjuring is a welcome break from what we’ve grown accustomed to in supernatural horror cinema. In many films, even the good ones, the entity is playing some sort of coy hide-and-seek with the living. The spirit is seemingly childlike, and only eventually becomes malevolent. These films don’t often go into the how and why of ghostly existence, probably for the better, but there is always the lingering question of why these angry spirits are holding back in the first place. Bathsheba does not have this problem. From the outset, there is no hiding that she is in the house and that she doesn’t like the Perron family. Her specialty is the undeniable, in broad daylight, display of her paranormal power. The house is her domain and she makes no effort to be shy about it. Because of this, there are plenty of shock moments when she asserts herself into their lives. These spectral intrusions got screams out of the audience around me pretty much every time. The unmistakable nature of these attacks also subverts what fans of more recent horror films will expect to happen and keeps the story moving further into tension and danger.

While the aesthetic of the movie is grounded in 70’s “church horror”, The Conjuring is quite contemporary. There’s a deliberate mix of handheld and static camerawork, a very precise movement from one character to another,  that relies very little on the common “ghostly POV”. This is a smartly constructed ensemble piece which covers two families who are under attack by a very dangerous third family. The heart of the film is close to Ed and Lorraine, but the Perron’s are treated in all aspects nearly as equals, and their common anguish is palpable.

The performances are sincere and subdued. Lorrain Warren (Vera Fermiga) is portrayed as a woman who is fighting on despite past trauma. Her lineage is closer to some of Stephen King’s more practical clairvoyants and distant from television psychics or the more awkward theatrical seers of horror history.  More importantly, she is played as a person and not as a type. Ed Warren (Patrick Wilson) is a bit stiff and earnest, but I imagine that is a matter of character and not performance. He seems like a man trying to present himself as part Ward Cleaver (Hugh Beaumont) and part Jimmy Stewart. Despite this, the audience can see the cracks in his tough shell when they start to grow.

Lili Taylor, as Carolyn Perron, goes from well-worn and caring mother, to being rapt with anxiety, and then to an intimate confrontation with the evil in the house.  As with the Warrens, there is an aura of genuine sympathy for these characters, and Ron Livingston, famous for his comedic work, brings a vulnerability to Roger Perron that deepens the terror in the house. James Wan has done a smart job of directing these people, once again recalling the family bonds which sustained the most damage in films like The Exoricst or The Omen.

The Conjuring has many strong points and is certainly a solid horror film which will appeal to mainstream and genre moviegoers. Most of what the film does right comes from a combination of homage to past classics with an awareness of what this kind of film needs to do for modern moviegoers. At the risk of drawing the ire of fannish genre audiences, I will say that it could’ve done more. Classics like The Exorcist worked so well because there was a unity and density to the film that gave the audience little room to doubt or deny the illusions of the screen. This is one advantage that working with an established religious mythology has over creative mythos like Lovecraft’s or even Stephen King’s more imaginative creations. The devil is a very scary thing for people that have feared it their entire lives. Unfortunately, for those of us who do not, it can sometimes feel a little hackneyed. Faith is key to the Warrens, it is the motivation for them, but it does not offer a sense of closure for viewers who don’t see Satan as any more than a stock boogeyman. Bethsehba is quite creepy on her own, and placing her in a categorically biblical pantheon weakened her for me.

There is also a host of creatures at play in the Perron’s house that are never dealt with. Sinister did a slightly better job wrapping up these kind of supporting spooks, while The Conjuring just drops them entirely. We are left to wonder if they are only extensions of Bethsheba, if they all just disappeared when she is dealt with. The story implies they are independent spirits, so there is no reason why they would just go away when the “mother” is removed. Maybe Wan and company were leaving room for sequels, but it feels more like a case of narrative acceleration to make it fit into the desired running time.

I understand that most people who see this film will not think that much about it, but I engage deeply with most movies and I need to feel like the filmmakers honor that attention to their work. I also know how very difficult it is to deliver a movie with all of the elements working in concert. I don’t begrudge James Wan or his team for this, but I can’t say that The Conjuring is a great film which should be placed in the highest ranks of the canon.

So, I know many will rightfully enjoy The Conjuring, many will correctly celebrate it, but after the movie ended I was left feeling disappointment by comparison. I still get chills when I think about The Exorcist, I remember a time when I was afraid to even look at the cover of my copy The Omen paperback and Insidious left me unsettled enough to have to watch something else before I could go to sleep. (The Woman in Black might have done the same if not for the moronic final scene!) If The Conjuring gives you similar heebie jeebies, I am quite jealous.

For me, there is a layer absent in The Conjuring. This is the layer where Micheal Myers, the xenomorph and Pazuzu are embroidered. This layer cannot be woven in using the fibers of a previous fabrication; they must be pulled fresh from dark spiders by hand, soaked patiently in crimson witches’ brew and threaded through by needles which should, if done correctly, be fashioned by the shards of your own brittle bones.

Then you can share this thing that nightmares are made of.