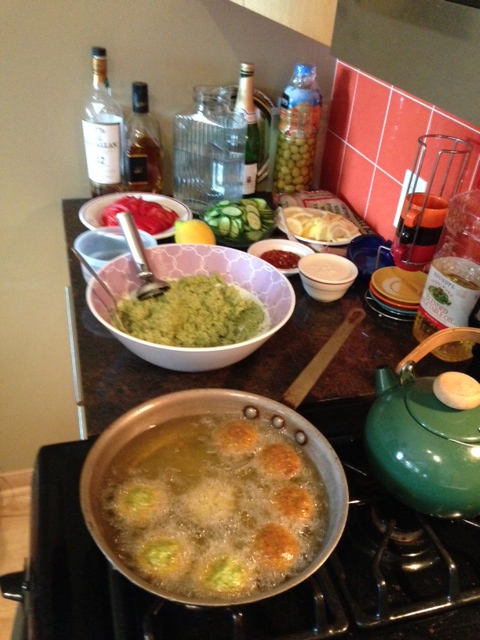 In Issue 156 of Saveur Magazine, Pittsburgh’s Conflict Kitchen (a restaurant/project that changes its menus and only serves cuisine from a country in which the US is in conflict with) was featured. It’s a way to create dialogue and get people interested in what is going on in the rest of the world. Menus serve as fliers to inform diners on the situation. Servers are trained to be “conversationalists” on issues regarding each country.

Food is a great way to start a conversation about history and politics. Growing up, the taste of Chinese “peasant” food such as salted fish and congee reminds me of gathering at the table and waiting for my parents to say enthusiastically, “Sik Fan La!” which means “Let’s eat!” in Cantonese. My parents, however, may not remember meal items like this in the same nostalgic way. For them, this might trigger the memory of hard times – there was no fresh fish to eat and you water rice down to make the number of grains you have stretch for a longer period of time.

Hearing their struggles and what they’ve overcome to give me a better life made me think: things can only get better. Is this true? Medical care is better. People live longer. Human rights are respected. Sometimes. The problem is this doesn’t apply to everyone. So this Conflict Kitchen in Pittsburgh made me realize, I don’t know enough. Why are we in conflict anyway? And why hasn’t it been resolved? And most importantly, what can I do?

Although we don’t have a similar concept in Minneapolis, we can easily gather our friends and create a restaurant crawl. Not only can we learn more about the people in our community that started these good eats, but we can recalibrate our responsibilities as global citizens to learn more about what is going on.

Based on cuisines that have been featured at Conflict Kitchen, try these local places:

Venezuela
http://www.almcornercafe.com/
It appears that they no longer have a restaurant location, but serve food at various festivals.