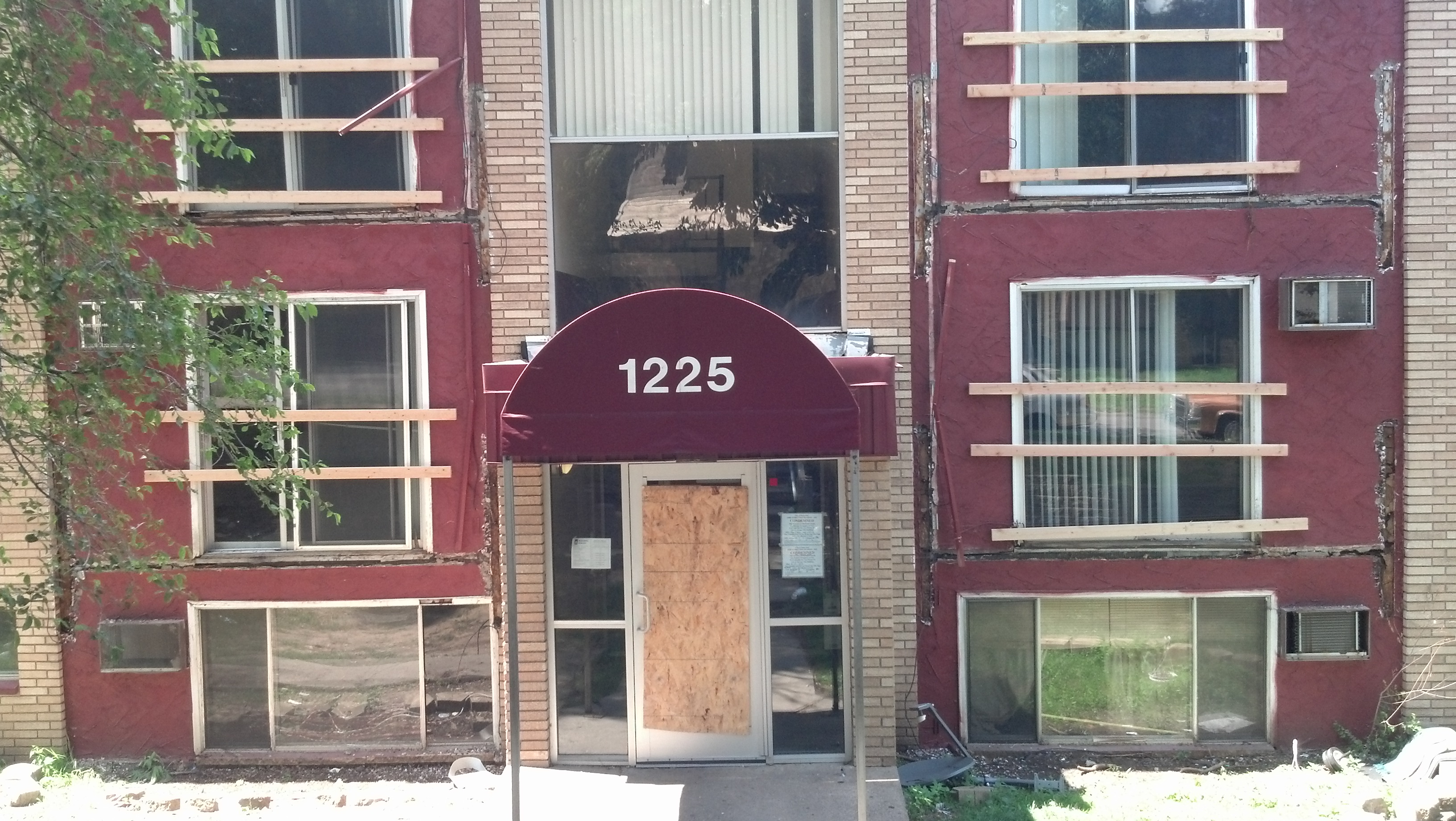 After more than a month of fighting to keep from getting evicted from their homes, the six remaining families of St. Paul’s infamous Westminster Court apartments finally settled with property owners Sunday evening and left the apartments, not wishing to face the possibility of arrest.

The problem properties have made the news on several occasions since last January. The city decided to condemn the buildings when inspectors found over 600 code violations last winter, under the management of Peggy and Randall Chun.

After the condemnation, the properties were put into receivership, and then they were foreclosed and sold to Edina-based Pine Ridge Capital, LLC., which turned management over to Equimax Real Estate of Wayzata.

Equimax decided that the best option for the buildings, which had suffered under years of neglect, was to gut them and start afresh, which meant shutting off the water and electricity and evicting all of the tenants.

The St. Paul City Council turned down the tenants’ final appeal on July 3, and upheld the condemnation, with the Department of Safety and Inspections performing a final sweep Monday morning, July 9. An Emergency Tenant Remedy Action demanding that Equimax provide alternative housing and reimburse security deposits and unused rent was filed June 27, and the court ordered Equimax to make repairs, refund security deposits, and relocate tenants in temporary housing, paying part of the cost of that housing.  A compliance hearing to determine Equimax’s compliance is scheduled for July 12. 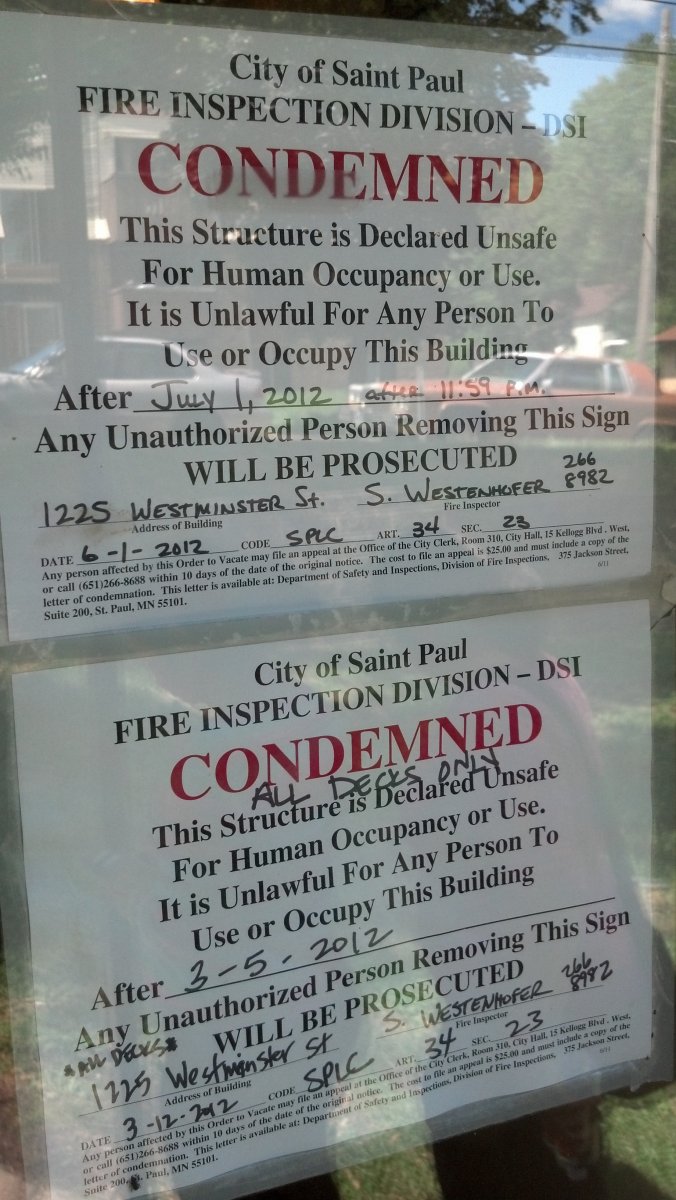 The notice to vacate came out of the blue for many of the residents, who simply didn’t have the time or resources to properly move in the 30 days allotted to them by Equimax at the beginning of June.

“30 days was not enough time for these tenants to move,” said Leslie McMurray, the executive director of the District 5 Council, who had been helping the remaining tenants over the last month. “Anyone that believes 30 days is enough time probably hasn’t moved since college.”

Pedro Veliz had been living in his apartment at Westminster with his wife and four children for 14 years. During the day, Veliz worked as a self-employed painter, so he and his family had to move their things at night, little by little — but with one car in the shop, it took them a week to move, said Veliz.

Besides time, tenants worried about the money needed to find a new place. They had paid security deposits when they moved into Westminster Court. However, with all the switching between management, just where those deposits were was both disputed and unclear. 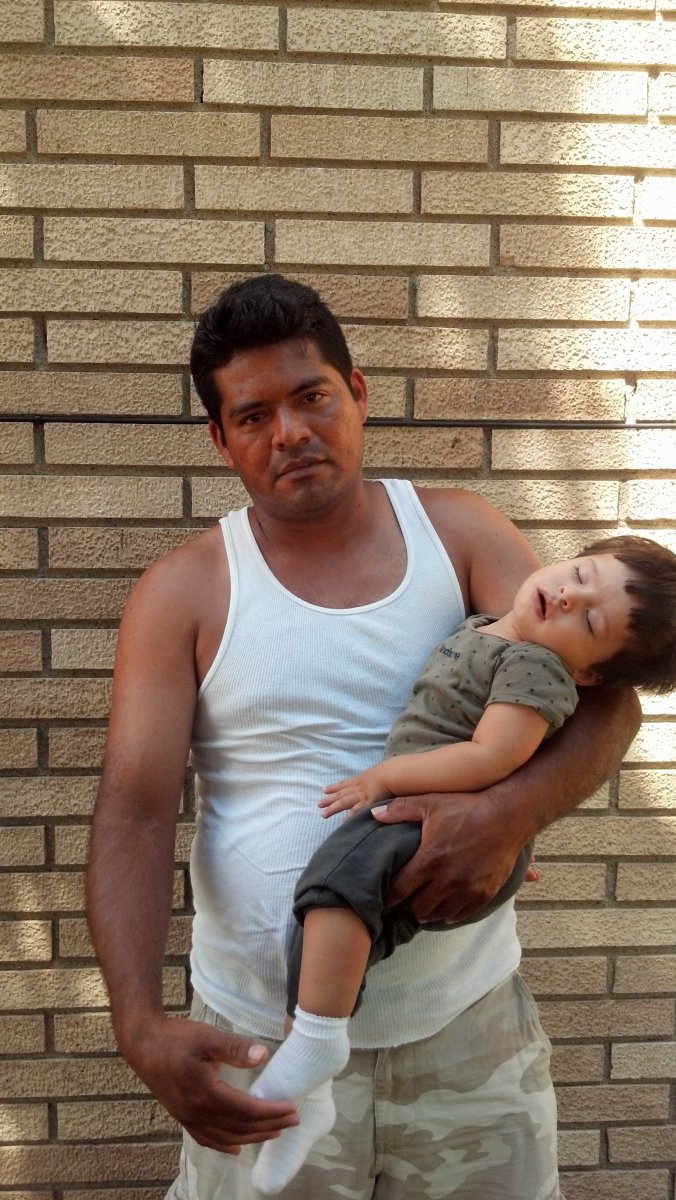 Pedro Veliz and one of his children

Between last December and now, management had switched between three different owners and three different management companies. It’s not surprising that lease and rent documentation became lost along the way, said Nephi Anderson, who had been living at Westminster Court for a little over a year.

In April he prepaid six months of rent. When Equimax took over later that month, they said they had no records of payment.

“The first time I had heard of Equimax was when someone was knocking on my door with a note saying that I have not paid my April rent yet,” said Anderson.

Anderson contacted Southern Minnesota Regional Legal Services, who helped him get the previous management, Trikin Properties, to fax over his rent records, which proved that he was paid up until October. He is currently negotiating with Trikin for reimbursement of his unused rent. Anderson’s SMRLS lawyer could not be reached in time for this article.

Issues of security deposit responsibility were disputed, since it wasn’t Equimax that collected the deposits from the tenants that lived there before April.

When Anna Rivas, who had lived at Westminster for more than five years, went to speak with an Equimax employee in the apartment offices about her $600 security deposit and payment for staying at a hotel while she searched for housing, the employee told her that it wasn’t Equimax’s responsibility, says Rivas.

“I cannot prove it, but it appears that money never went from Peggy Chun or her husband [to the city appointed receiver],” said Anderson. “Either her or her husband never turned over those funds to the receiver which was in the court order.”

Whatever the truth may be, the district court ordered Equimax to settle up with tenants, when they issued the ETRA on June 27.

However, there was a language barrier that wasn’t addressed by Equimax, says McMurray, and many of the Hispanic tenants did not understand the buyout agreement because it was written in English.

Wade Shatzer, CEO of Equimax, claims they had translators on staff, but the buyout agreement was never translated on paper.

A history of mismanagement

During the Chun’s ownership of Westminster Court, many of the tenants only spoke with Peggy Chun when paying rent, and otherwise found her inaccessible, despite their repeated complaints about the property.

Last year, MPR interviewed a tenant who showed first hand just how many problems had accrued at the properties, including broken radiators, broken toilets, bug infestations and rotting wood.

Pedro Veliz got a bad credit rating because of the property, after he fell and injured himself due to the building’s degrading structure. According to Veliz, when he tried to take Peggy Chun to court three times to pay for his chiropractic treatment, his $3,500 bill went to collections.

“I had to pay the bill out of my pocket,” said Veliz, “that’s how I fixed my credit. I never sued her because she would never show up to court. Even the attorneys of the chiropractor called her. She never answered the phone.”

Veliz finally managed to find a house to buy for his family, but they can’t move in until July 18. Until then, he and his family are staying at a house provided by La Asamblea de Derechos Civiles, rent free.

According to Veliz, he settled with Equimax for $1,500 in exchange for moving out.

A few of the remaining families on Sunday accused Equimax of using intimidation tactics to get them to leave.

One of the Equimax managers at the property carried a pistol in his belt, says Antonia Alvarez, a member of La Asamblea de Derechos Civiles, who used her phone to take video of the man with the pistol while she was helping tenants last week. (See videos below)

“We have kids here, and he is not police,” Alvarez tells a St. Paul police officer in the second video. “I understand that you are the policeman and you have the pistol, but why him?”

“It’s legal,” replies the man with the gun, to which the officer agrees, dismissing Alvarez’s concern.

According to Alvarez, the man entered a tenant’s apartment and laid the pistol on the table as he asked the tenants to sign the buyout agreement.

“It never happened,” said Wade Shatzer, CEO of Equimax, who denied that the gun was ever used to intimidate the tenants. “He carries a gun, so what?”

Pedro Veliz heard four shots on Saturday night, and found the glass of the back door at the 1225 building shattered. He isn’t sure if it was Equimax employees trying to scare them, he says.

“This is something I see a lot in Mexico,” said Alvarez, “but not here.”