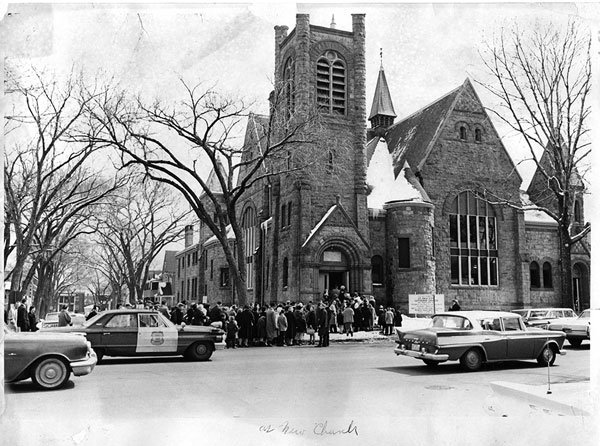 Marching from their old building to their new site on March 22, 1964, St. Paul’s Church committed themselves to the Phillips Neighborhood. Seven years before, St. Paul’s Church had faced its biggest decision. They learned that the projected I-94 freeway was going to take their building. The congregation had been located at 18th Street and 14th Avenue South. A decision had to be made. Would they, like hundreds of congregations in Minneapolis’ core city, move to the suburbs, or would they stay in the city? Already they had members living in Bloomington, Richfield, St. Louis Park and Plymouth. Moving to the outskirts of the city might make sense. In a crucial meeting, one sentence was uttered that would determine the future of the congregation: “Where is a church more needed than here?”

From their decision in 1957, they began to look for a location nearby. At that time, the majestic former First Presbyterian lay derelict. The denomination had closed the amazing granite church about 1950. Pigeons were flying through its broken-out stained glass windows. Wiring and heating were desperately outdated. St. Paul’s congregation saw tremendous possibility, so they bought it for $75,000. They added a quarter of a million more, plus thousands of hours of volunteer labor, ending up with a very useful, modern building. An entire new level was added inside the former atrium. On Palm Sunday of 1964, the congregation marched three-quarters of a mile from the old location to its new site at 1901 Portland. Today it’s recognized as the most outstanding Richardsonian Romanesque church building in the upper Midwest. Replacement cost in brick is now over $10 million; in granite, it simply can’t be done.

That commitment to the city will be renewed in the next few months as the congregation celebrates the 50th Anniversary Golden Jubilee of its move to its current location in the Ventura Village/Phillips Neighborhood. There will be concerts, celebrations and a re-enactment of its march. Its ministry has thrived at its current location, with a strong emphasis on cross-cultural ministry training, as well as service and faith formation by its missionaries around the globe. It currently is the home of the MissionShift Institute and the Urban Cross-Cultural College Consortium (U4C). The U4C urban studies program is a partnership of Concordia University, the University of Northwestern and St. Paul’s Church. Over 600 hundred students have invested a year in Ventura Village by attending its internationally-recognized programs in urban cross-cultural outreach. St. Paul’s members are spread out around the Twin Cities: one-third live within three miles of the church, one-third within six miles, and the other third are spread out across a 60-mile circle, including Eagan, Shakopee, and Maple Plain!

“Staying in the city was a gutsy move; sometimes it seemed like a foolish idea to remain in the neighborhood,” says Pastor Roland Wells, who has served the congregation for 25 years. “But St. Paul’s stayed, dreamed and built, making it through the crack wars of the nineties. Now being a part of the redeveloping neighborhood, we are glad for our decision to remain in solidarity with the city.” Until recently, St. Paul’s was the only local congregation to relocate and remain in the core city. “We see it as answering God’s call to remain. Even though the congregation is much smaller than it was in 1964, it continues to do outstanding ministry.”

To celebrate its Golden Jubilee Year, several events are planned:

On Sunday night, March 23, 7 PM, they’ll host a concert by Dan and Sandy Adler along with the Heart of the City Band. This outstanding multi-cultural group will lead an evening of fantastic music and worship. A freewill offering will be received.

On Palm Sunday, April 13, St. Paul’s and its three partner congregations, (Iglesia Centro Cristiano de Minneapolis, Ebenezer Oromo Evangelical Church, and Every Tribe and Tongue Church) will re-enact the historic march from St. Paul’s old location to its present site. Marchers will meet at 18th Street and 14th Avenue South at 9:30 AM. (A shuttle bus from St. Paul’s to the old site will start at 9 AM and again after the service.) Rev. Mark Vander Tuig, Service Coordinator of Lutheran Congregations in Mission for Christ will be the speaker at a festive joint worship service at 10:30. All are welcome. A huge multi-cultural potluck dinner will follow.

Finally, on Sunday, May 4 at 4 PM, St. Paul’s will host Global Worship 7, a festival worship experience of many cultures and languages. The past several of these moving events have filled St. Paul’s to capacity, so come early! Overflow seating is available. Many different cultures will help lead the worship. Color, movement, world music, costumes and exotic instruments all will lend a festive touch to this very special day. A freewill offering will be received. This year’s Community BridgeBuilder Award will be given to Rev. Cher Moua, noted Hmong leader in the Twin Cities. All are welcome!