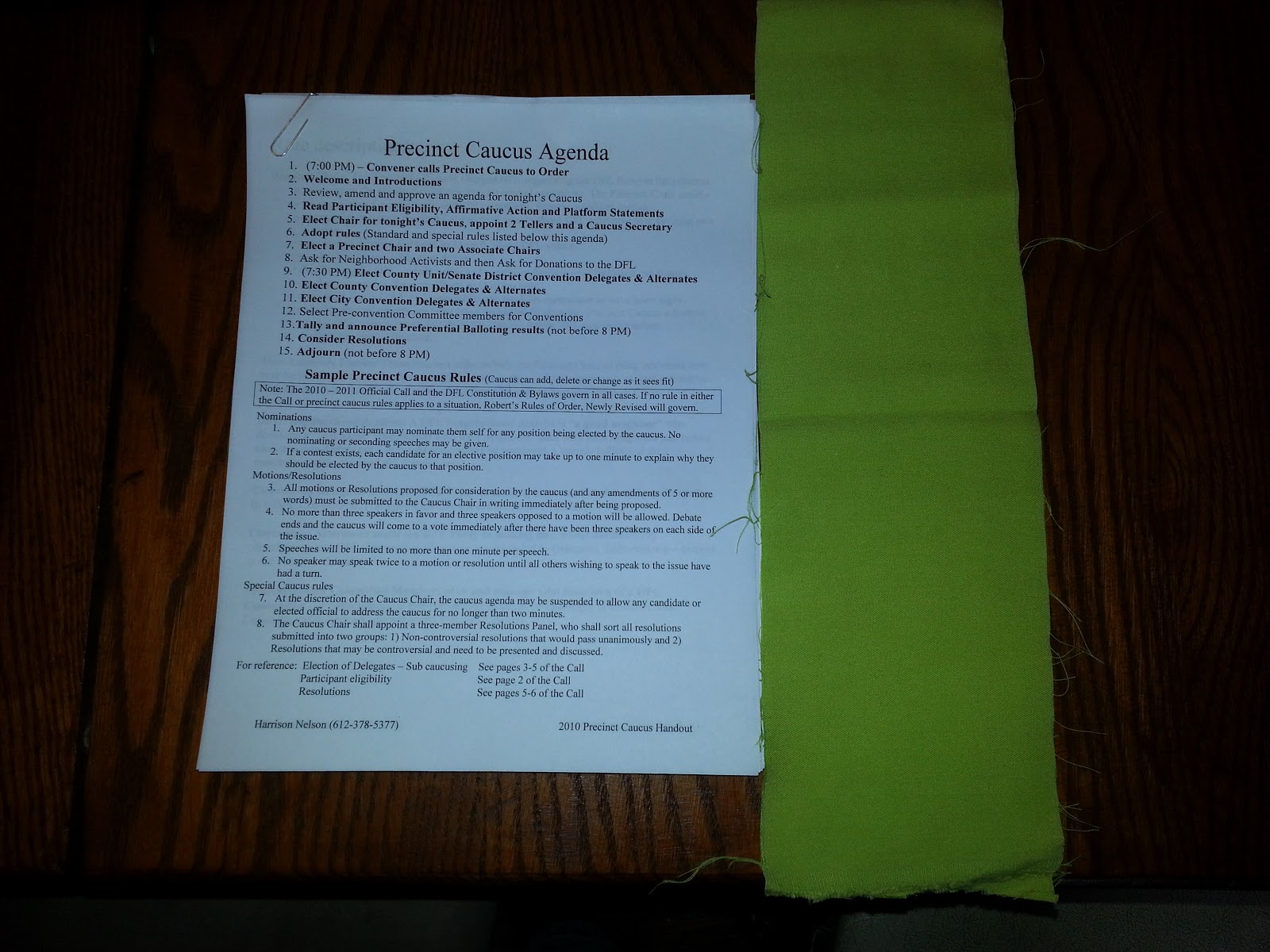 On Tuesday, April 16, most Minnesota political parties will be holding their precinct caucuses. For the political neophytes, which is most of us, the precinct confusing and counter-intuitive. Well, I’m here to help. By the end of this blog post, you will realize that, far from being confusing and counter-intuitive, the precinct caucus system is actually quite tedious and nonsensical. But at least you’ll know how to slog through one and why they’re important.

And a quick disclaimer: I have been and will continue to be active in the DFL party. The process I’m describing is what typically happens at those caucuses, and could be different if you ascribe to other political persuasions. You can find your DFL caucus location by going to the Minneapolis DFL homepage, clicking on the Secretary of State pollfinder link to find your ward and precinct, and then lining that up with the caucus location on the homepage. See? When just finding your location is a multi-step process, that’s a sign of what’s to come.

So Democrats in Minnesota endorse their candidates through a two-step process: caucuses and conventions. A precinct caucus is where you sign up to be a delegate to the conventions. Only delegates can vote at the party’s ward or citywide conventions. If a candidate seeking DFL endorsement gets enough votes at the second event, he or she gets the party nod and DFL resources can be directed to that specific campaign. In years when we have presidential or gubernatorial elections, a “preference poll” is taken to gauge which of those candidates have party support.

Some people come to the caucuses just to cast a vote in those preference polls. This year there likely won’t be such a poll, so attendees will largely be people who want to be delegates, people who want to put their time in on the inner workings of party politics, or both. If you’re going on behalf of a candidate, there is a very simple set of instructions to remember. 1. Show up at 6:30. 2. Wait until delegates and alternates are selected. 3. Say you want to be a delegate. 4. Fill out the proper forms and stay until the chair of the event says delegates can leave.

For the more detailed breakdown I’ll walk you through a typical precinct caucus.

You’ll go to your location, sign in and attest that you aren’t caucusing with any other party, and you’ll be directed to where you need to be based on where you live within the ward or precinct. Often the caucus is at a school, and different classrooms are where each precinct does their business. You’ll sit down at a desk that’s too small for adults and either converse with your neighbors or stare at walls adorned with dinosaurs and solar systems and cursive alphabets. Just as you’re looking at the list of planets and wondering, “Where the heck is Pluto?” the meeting is called to order.

The agenda for the caucus is approved, and participant eligibility is explained. The convener of the meeting then takes several minutes to basically say the DFL party likes everyone and encourages diversity. This is called an affirmative action statement.

A chair for the meeting is elected, and it’s usually the person who was running the meeting to start with. The group also elects a secretary to record the minutes, and two tellers to count ballots if written ballots are needed. Along with the agenda, the group needs to adopt a set of rules. Those are generally written out ahead of time. And although you could move to amend the rules, doing so classifies you as a bureaucratic blowhard of the highest order, and it is socially acceptable for other attendees to dig around in the kids’ desks for crayons to throw at you until you stop. So just approve the rules as they’re already presented, okay? Great. Moving on.

Next, the precinct chair and two associate chairs are elected. You might think that by electing a chair for the night’s caucus, that was all the chair-electing that needed to be done, and you’d be mistaken. These two positions handle the caucus business from one year to the next, and handle tasks like setting agendas and rules.

At some point during the process, they’ll pass a hat around for donations to the party. Because if there’s one universal response to soul-crushing tedium, it’s “I want to give these people some money.” I mean hey, it seems to work for the opera and NASCAR, so why not?

Now we’re at the part of the caucus most people came for: elections of delegates to the upcoming conventions, which this year are ward and city conventions. Delegates to each precinct, which is a subdivision of the ward, are allocated based on a percentage of the voters in last year’s election. Usually this means that there are far more spots available than there are willing delegates. If the process has been running smoothly, or if the crayon throwing worked the way it should, one can expect to arrive at this point in the evening rather quickly.

When there are, for instance, ten spots for delegates and eight people who want to participate that way, voting is pretty easy and painless. Alternates are also selected at the caucus, so if there are ten delegate slots, there will also be up to ten alternates chosen. At the convention, if a delegate isn’t present or leaves, an alternate can be upgraded to a delegate position. At most caucuses where there are ten delegate slots and twelve who want that role, the group can usually convince two people to accept the alternate designation to avoid a lengthy voting process.

This year, especially in the fifth ward, who knows? With an open mayoral seat and a host of qualified candidates, you can expect more than a few people turning out wanting to be city delegates. This dynamic is compounded locally by two factors. First, that two of the mayoral candidates reside in the fifth ward, so we can expect that they’ll turn out their base. And second, with an open council seat and yet another host of qualified candidates running solid campaigns, we can expect competition even for the ward convention.

Usually the delegate and alternate selection is over in a matter of minutes. This year it could take some time to sort out.

While ballots are being tallied, the group will also choose pre-convention committee members. These are people who will work on things like the credentials committee, which verifies that delegates and alternates are indeed eligible; or the rules committee, which decides things like whether to end the convention at a specific time regardless of how many votes for endorsement are made, or to end after a certain number of ballots regardless of how long it takes; or the arrangements committee, which in the last Senate District convention failed to realize that the physical layout was one big hot mess.

During the evening, candidates or representatives from campaigns may stop in and speak if the group allows. There will be open campaigning happening, unlike polling places on election day. Also, there is an Ultimate Bureaucratic Blowhard tactic that I’m not even going to get into, known as sub-caucusing, although it is rarely employed. If you can withstand the crayon-pelting I mentioned earlier, I recommend amending the rules to make sub-caucusing punishable by death. You will be hailed as a hero. Trust me on this one.

The final activity to be undertaken, usually while ballots are counted, is for the group to consider resolutions. These are statements that, if they garner enough approval at the convention level, become part of the party platform. And if that happens, you can be proud of the fact that your resolution, submitted at the most local level, vetted by various subcommittees, and voted on by hundreds and hundreds of party activists, accomplished basically nothing.

Finally, after about an hour bordering on an eternity, ballots are counted, and ward and city delegates and alternates are selected. If you have become one of The Chosen, you’ll be given instructions on how to participate in the ward convention (which lasts about half a day) or the city convention (which is expected to take the entire day). None of this will make any more sense than what you just went through. But that’s OK! You have run the gauntlet. You went through a confusing and arcane process that, thanks to Minneapolis being a one-party town, can essentially decide who the top candidate is before the masses even know what hit them. And that, my friends, is what makes democracy so great.