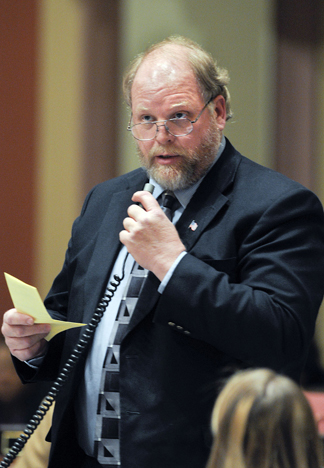 Several House members are planning a run this fall for the Senate. But none has a more complicated road for a seat than former Rep. Lyle Koenen (DFL-Clara City).

Because redistricting paired him with Rep. Andrew Falk (DFL-Murdock), Koenen, a five-term House member, opted to run for the Senate seat that opened when Sen. Gary Kubly (DFL-Granite Falls) passed away.

Koenen won the April 10 special election, and while he was sworn-in April 18 to serve out Kubly’s term, his future in the Senate remains in question.

At the recent Senate District 17 convention, he and another candidate went through a grueling four rounds of balloting before delegates opted for no endorsement, triggering an August primary to determine the district’s DFL candidate. If Koenen wins the primary, he will be on the November ballot.

His trek to the Senate actually began before redistricting after the 2000 census. He was serving as the Chippewa County DFL chairman, when he was prompted to run against Republican incumbent Charlie Berg. “No one was running, and I was asked at the last minute ­— just to get my name out,” he said.

He was victorious in the 2002 election, and since then has represented an area that has experienced radical change — with district counties seeing some of the greatest population declines in the state. But Koenen says that doesn’t mean the needs are any less or should be ignored.

“Let’s take a small town that is losing population, they are still Minnesotans, and I believe they need the basic infrastructure — water, sanitary sewer. So I believe the state should be living up to its responsibilities there,” he said. A bonding bill is critical for many Greater Minnesota communities because it affords them the chance to repair and replace aging infrastructure, he said.

Having served many years on House taxes committees, he has seen the changes to local government aid, leaving some tax-poor communities strapped.

“The LGA (local government aid) system was set up based on need, and if the system is working properly, they should be getting their portion of LGA,” he said. If re-elected to the Senate, Koenen would like to continue to focus on the area of taxes. “My goal is that the tax system be fair, so that it doesn’t overburden working people.”

A big part of the county tax levy comes from farmers, he said. “So anything we can do to level out the county aid, and for the state to pick up its fair share would in turn benefit farmers.”

Koenen said a continuing problem in rural areas is job creation, so that young people can stay in their home communities. He believes addressing the problem begins with increasing education opportunities.

“One of the most important things I would like to see happen in our part of the state is more good paying jobs, so our young people don’t have to leave. That’s the No. 1 thing.” He praised the Minnesota State Colleges and Universities system campuses and its program offerings. “MnSCU students tend to stay in Minnesota,” he said.

But for good jobs to take root, the area will need faster and more reliable Internet access along with road improvements.

“If you take a look at the state and where the four-lane roads are, there is a big void in the southwestern part of the state.” He added that many roads need to be brought up to safety standards as they are not able to carry heavy loads.

In the end, however, it all comes back to sustaining farming and farm-related industries, which are the economic lifeblood of western Minnesota, he said.

Koenen does have regrets about leaving the House.

“Personally I’d be just as happy serving in the House. I have quite a bit of seniority here. In the Senate, however, there are fewer members, and there’s a little bit more opportunity for me to inject myself into what’s going on.”

He said Kubly’s shoes are big ones to fill. “He was always a good example of how a legislator should act. Nobody can replace him.”