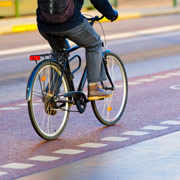 It’s a bedrock American principle that public facilities should be accessible to all the people, even if we haven’t always honored it. Despite years of Americans with Disabilities Act reforms, some government buildings still block out wheelchairs. And streets and roads, full of a wild mix of human-, animal- and fossil fuel-powered transport a century ago, gradually were monopolized by motor vehicles.

Only recently has a principled campaign to reopen public rights-of-way to non-drivers begun to take hold. It’s called Complete Streets, now a policy of the state of Minnesota and many local governments. Some of this movement is centered in the Twin Cities area, but most of our state’s official Complete Streets policies have been adopted by governments outside the metro—places like exurban Big Lake and rural Pipestone, Dilworth, Clay and Ottertail counties. The Minnesota Complete Streets Coalition has the full list.

One of the first cities in Minnesota to take this step was Albert Lea, back in September 2009, eight months before the state did so. In a recent guest column in the Albert Lea Tribune, City Council Member Ellen Kehr recounts this history, calling it “a step in the right direction toward making Albert Lea and all Minnesota roads safer and more accessible to users of all ages and abilities, whether traveling by car, on foot or bike.”

“Why complete streets?” she added. “They provide accessibility to seniors, children and people with disabilities. They have a proven record of promoting community connectedness and bringing vibrancy, efficiency and economic stimulus to the areas they serve. Building on our economic value and quality of life, complete streets can lower transportation costs for families and enhance our environment.”

Albert Lea’s Front Street bicycle lanes were among the first in Greater Minnesota, Kehr said. “We can be proud to say that Albert Lea has been a leader in the area of both passing public policy and implementing the complete streets design,” she concluded.

May is National Bike Month, an occasion for two-wheel events across America. In Albert Lea, the festivities include a Family Bike Rodeo, Bike to Work Day, adult and child triathlons and “Albert Lea Open Streets: A Day of Play.”

We usually think of alternative transportation as a big-city phenomenon. But regional centers such as Albert Lea, population 18,000 and relatively unsprawled, may actually provide more fertile ground for nonmotorized mobility.