When Minnesota officials of the former state highway department began planning a repaving project on Hwy. 61 in White Bear Lake recently, they told the city they couldn’t do anything to improve the median strip, widen an adjacent sidewalk or accommodate bicyclists. That got the attention of advocates for active transportation, who pointed to a 2010 state law that requires consideration of all travel modes and all abilities in every road project. 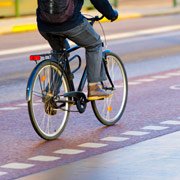 Minnesota’s Complete Streets legislation was among the first of its kind in the United States. In August, a national clearinghouse group noted that 500 states and sub-jurisdictions have adopted measures that “made their streets safer and more accessible for everyone who uses them.”

But, as those involved in the Hwy. 61 planning discovered, what is on paper doesn’t always translate smoothly to where the rubber or the shoe leather meets the road. Sometimes, even the paper comes up short. More than three years after former Gov. Tim Pawlenty signed Minnesota’s Complete Streets law, the state Department of Transportation still hadn’t produced a formal policy to implement it.

“They don’t have a policy that is transparent to the public. Every community has to fight for it,” complained Connie Bernardy, a state legislator who works with Active Living Ramsey Communities, a county parks program that promotes “healthy environments” and “bikeable and walkable communities.”

MnDOT officials responded that they used a Complete Streets technical memo while progress was made toward a permanent policy. And last week, directors of agency divisions approved a draft policy that this week was awaiting only Commissioner Charles Zelle’s signature to take full effect.

“It was more complicated than people thought it might be,” said Erik Rudeen of MnDOT’s government affairs office. “But our position has always been that we have the flexibility within trunk highway right-of-way to do pedestrian and bicycle improvements. Getting pedestrians and bikes off the highway is a benefit to drivers.”

That analysis is intended to head off possible challenges to MnDOT bike-ped projects financed with fuel and vehicle taxes that are dedicated by the Minnesota Constitution solely to “highway purposes.” In observance of that dictum, such Minnesota levies, unlike federal fuel taxes, have never gone to transit, nonmotorized trails separate from trunk highways or plugging government general fund deficits.

Speaking of complicated, MnDOT is mounting a separate “review and analysis of federal and state laws relating to bicycle, pedestrian and nonmotorized transportation, including, but not limited to, bicycling, pedestrian travel, inline skating, roller skating, skateboarding and horseback riding.” Whew. Part of research for a report due to the Legislature in January, its draft form runs to 180 pages, said MnDOT’s coordinator of the project, Mary E. Jackson.

It was originally scheduled for completion in July. Delayed for various reasons, it should be done by the end of this month, Jackson said.

Bureaucratic tieups notwithstanding, a less autocentric Hwy. 61 project than originally envisioned is shaping up in White Bear Lake. MnDOT has agreed to widen the median along with new crosswalks, signs, signals and landscaping, but on the city’s dime. At the same time, though, MnDOT enhanced the $3.5 million 2-mile mill-and-overlay project with $290,000 in special funds to pay for upgrading sidewalks on the eastern edge of the highway adjoining the city’s commercial heart, said MnDOT area manager Wayne Norris.

But there’s no room for sidewalks on the west side because that’s railroad land, and there’s still nothing in the project for bicyclists within the narrow state right-of-way, he acknowledged.

“We do not consider Hwy. 61 in this area as a bike-friendly environment,” he said. “There are no shoulders, many uncontrolled vehicle turns, 30,000 cars a day through the corridor and the volumes are growing. If I had 6-foot shoulders, there’d be no issue.”

Bike lanes might have been wedged in if the median were eliminated, but city officials rejected that option, Norris said. Many pedestrian improvement details remain to be worked out between MnDOT and the city before work is undertaken next spring. Meanwhile, bicyclists will have alternate routes along a lake trail and adjacent city streets, Norris added.

“The law says we have to consider all modes,” he said. “But not all modes fit every corridor.”

That doesn’t mollify the critics, who say that changing the culture of a lumbering, thousands-strong MnDOT bureaucracy once dedicated almost entirely to moving lots of motor vehicles fast past everything and everyone else is happening much too slowly. For example, Bernardy said, MnDOT won’t consider reducing the highway’s 40 m.p.h. speed limit through the busy downtown stretch.

“Planning for all modes, including bike and ped, is MnDOT’s responsibility,” she added. “People have a legal right to use the roadway. It’s not up to the city to decide which modes of transportation will be planned for on a project.”

She also noted that Commissioner Zelle, appointed by Gov. Mark Dayton last winter, “is a champion of multimodal, a very positive influence … But it would be nice if Complete Streets became second nature throughout the organization.”

To its credit, amid continuing conflicts over the various uses of our highways, MnDOT has built many Complete Streets projects, even pre-Zelle. Still, it’s clear that its evolution from the days of the Minnesota Highway Department is anything but complete.