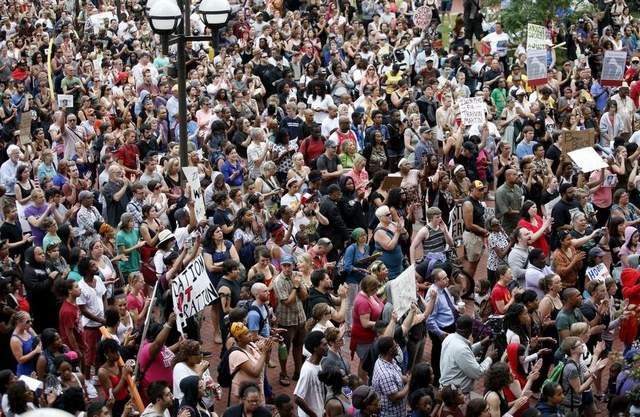 Last week a Florida jury acquitted George Zimmerman, the man who shot and killed Trayvon Martin. As a father of two black boys, a leader in this community, and a citizen of this nation, I am saddened and deeply concerned by the verdict in this case. For those of us who wanted to see justice served, we feel betrayed and outraged. This verdict illustrates how the deep-rooted ugliness of bias can be masked in a system that rarely protects those who it was not designed to serve. When you consider the many advancements we have witnessed in our lifetime, it is disappointing that our country is not as far ahead as we would hope. These actions confirm our work is far from over and we must continue to persist every day to achieve equality for all.

In a tragic situation like this, we are compelled to act and what I’m advocating is taking productive action. When we become part of a productive process, we are much more successful than when we stand on the sidelines. I’d like to share some ideas that can help empower us to build communities that work for all.

I was encouraged to see the hundreds of people, many of them young, who organized and marched in protest in the “Hoodies up for Trayvon” rally at the Hennepin County Government Center last week. As citizens we can demand action when we see an injustice. This case was brought to the national light because of the local leadership from Trayvon Martin’s parents, their attorneys Benjamin Crump and Daryl Parks and other concerned leaders in their community. We need to continue the dialogue (and if that doesn’t work – the marching and protesting) regarding race, racial profiling, diverse jury pools and gun laws. Inequality is no longer an option and racial profiling and violence toward our youth must end now.

In our very community and around the country, there are countless acts of gun violence toward our youth that will probably not gain national attention but deserve justice and fairness. We must insist that our elected officials enact laws that ensure safer communities for our children and our families. The current gun laws around the country have made way for far too many deaths. Day after day around the country there are reports of irresponsible gun use and in many cases our kids are the victims. We need to be at the forefront of these debates.

Have productive conversations with the children in our lives.

I realized in the course of this trial and eventual verdict that I had never really talked with my own son about how he would react if he were in a situation similar to Trayvon’s. He’s a tall, lanky, dark handsome young man who is now a college freshman. I asked him three simple questions: How would you have reacted in this situation? Would you have confronted Zimmerman physically? What would you do if you saw someone brandishing a gun?

His responses were astonishing. He would have defended himself and been both afraid and upset if he were being profiled and followed. I shared with him a number of similar incidents where I was approached or profiled while I was growing up. I let him know that it is important to remain calm, that he would not be considered “weak” for not fighting back; and as a matter of fact you would show wisdom and courage by not fighting back and living to see another day.

It is highly unfortunate that as black men we still must have this conversation with our sons but I am convinced it is highly necessary. A father, preacher, coach, community leader, or mentor could easily have these conversations with other youth they encounter. Let’s do all we can to empower our youth to be safe.

Working together for justice.

The Minneapolis Urban League and the entire Urban League Movement, along with the NAACP, National Action Network, the Black Women’s Roundtable and others have asked the Department of Justice to pursue a federal criminal civil rights investigation focusing on two important aspects of the federal law which may have been violated by George Zimmerman. Next week at the National Urban League Conference in Philadelphia, I will join leaders from around the country in a discussion of other possible actions. Locally, we must continue to have hope and press towards our goals to give more options to all of our youth.There is obviously still much work to do. By working together we can achieve justice, fairness, and opportunity for all.