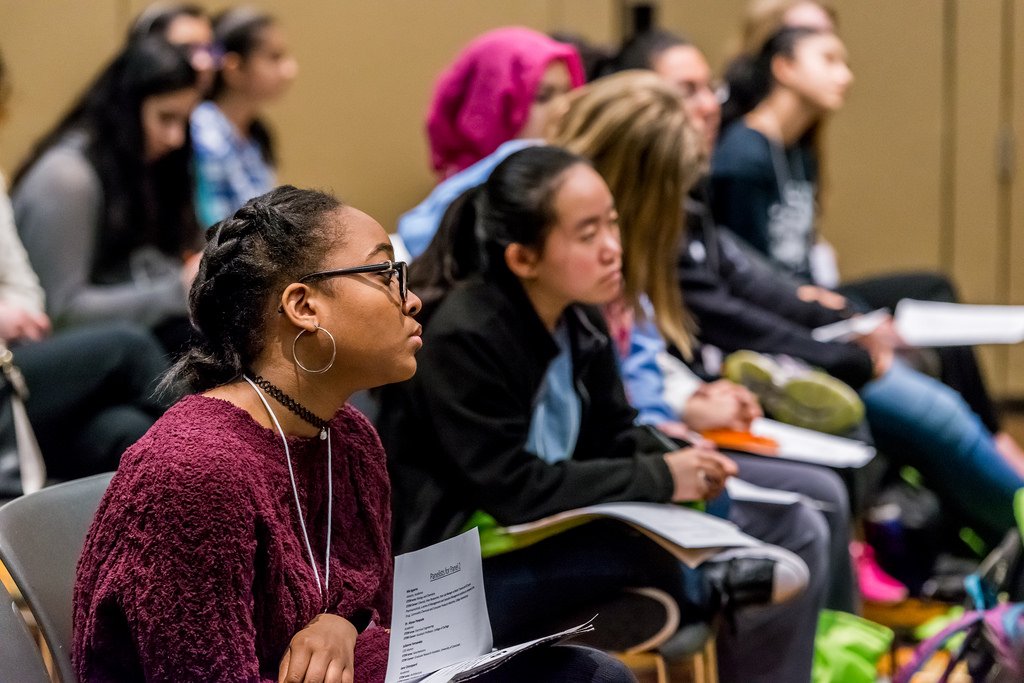 Educator Ryan Williams-Virden points out that white rich men and their families never have to be extraordinary, especially in the classroom. Photo courtesy of College of DuPage via flickr.

I’m just finishing my eighth year as a classroom teacher. I have worked at a number of schools, with a number of different philosophies and a number of different lenses through which students and families were viewed. These have ranged from simply encouraging students to show up so that the school could collect funding to preparing students to compete for full ride college scholarships. I have stayed after school to talk to a student about why he felt the need to come to school with a pistol; and I have stayed after school to tutor a student needing to grow two ACT points in order to qualify for admission to her stretch college.

Every school I have taught at has been in Minneapolis. As such I have taught in the city with the largest opportunity gaps in the country. Let that sink in.

No matter if I was at the Magic Transcript School or the Ruggedly Individual “Grit will save you” college prep, to “make it” (what does that even mean) my students needed to be extraordinary.

The student who brought the pistol to class did so because he lived in a neighborhood where to survive you cliqued up. When you clique up it comes with certain risks and rewards. He happened to be living through the wrong end of the risk part and needed the protection. He is a good kid. He is smart. He is kind. He is worthy. He is also extraordinary. Do you have any idea what it takes to live in that environment? To wake up and feel that level of anxiety? And then go to school? That is extraordinary.

It’s just an extraordinary that we don’t talk about. It doesn’t result in donors throwing thousands of dollars at you, though it should. It doesn’t even result in politicians waking up and addressing the systemic origins of your environment. Why is that? Nevertheless it is extraordinary. It requires a skill set we don’t like to admit is required in the land of the free and home of brave where equal opportunity abounds. It exposes that lie. Adding to the extraordinary.

The student who needed two more points on her ACT to get into her stretch school, we like to talk about her much more. She did everything right, made the right choices and learned the ways of respectability, the force is strong with her. She goes to the school where students are expected to do what she does because the teachers are, of course, extraordinary (even though they aren’t, not even a little bit). Rich white men who scoff at the struggle of my student with the pistol will hold her up as what everybody could do if they could just “behave.” They will marvel at her grit and wonder at “how she came from where she did.” They will call her extraordinary. And they are right, she is. Just not for the reasons they think. While they hold her up as “making it” she is code switching and deflecting their not-so-micro-aggressions. She has had to overcome the pitiful primary education which left her on the wrong end of the opportunity chasm this city has so eagerly put in place. Nobody mentions that though. Nobody acknowledges that to get where she is, she lapped rich white men’s own children. Instead she has had to read about dead white men, in books written by old white men, being taught by young white women. Never once has she seen herself reflected in her curriculum. And she still kills the game. She knows it’s a game. And she is learning the rules as she goes, and winning. When she gets accepted she is not done having to be extraordinary, she still has to pimp the system and avoid the student loan trap. And she does. She funds her college education through scholarships, work study and grants. Still they will misunderstand her excellence. They will say her hard work paid off and pat themselves on the back for nurturing the benevolent meritocracy, and they will never question why they are cashing checks their own work didn’t write. They will think they had something to do with her excellence. They are all wrong.

All the while, in a suburb close to you, the mediocre children of mediocre white folks are crying while their father is sending an email to the principal asking her to intervene on their child’s behalf because the mean English teacher gave them the B they earned instead of the A the seat on the board was suppose to guarantee.

You see, white rich men and their families never have to be extraordinary.

They have been born with the access and the resources that every single one of my extraordinary students has had to fight for. They make the same mistakes – if not worse – and never have to answer for them. They don’t have to worry about some grossly under-qualified “captain save the hood” white-liberal-setting-up-grading systems that inflate grades while he sells their successes to other white liberals who “want to make the world better” as students fail out of college because they have never heard of a deadline before. Nope. Won’t happen. They have safety nets in place to prevent that sort of thing. Adding insult to injury these are the same “save the hoods” that will use the excellence of the students who do graduate college to distract from their own complicity.

Today, I said goodbye to my advisory – a group of the most awesome 14- and 15-year-old boys you could ever meet – and asked one of the students what he learned this year. He said, “That I ain’t smart enough.” He passed all his classes and is plenty smart. He has also been a student in the worst city he could be a student in, so he is not as strong in some academic skills as he needs to be. I have told him that. I don’t lie to him. I hugged him, told him he was brilliant and that we got this. We are going to work our behinds off and be extraordinary.

This year I was part of a phenomenal group of people charged with founding a high school. It is a school dedicated to disrupting systemic inequality, closing the opportunity gaps and making the world a more just place. Are we perfect? No. Are we learning? Yes. Are we growing? Yes.

Part of that growth has been paying specific attention to how much more our students are expected to do. How much better they are expected to be. How extraordinary they will have to be. Not just if they want to go to college, but if they want to sharpen the skills necessary to understand the world around them and make a difference in that world. And then telling them that. And that hurts my soul to write. Still, it is the truth. In the state that is ranked 48th and 50th for Black and Latino students respectfully, my students will have to continue to be extraordinary. And it would be extraordinary if that would change.