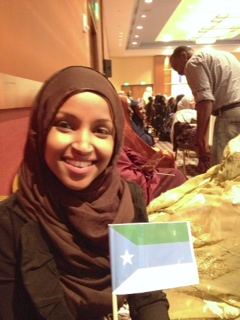 Over 2,000 members of the Somali Minnesotan community gathered Saturday to celebrate the successful formation of Jubbaland: a new regional state in Somalia. The creation of the state is a result of a newly adopted provisional constitution stipulating the creation of regional states. Ilhan Omar, a Somali American advocate for political access, supports the creation of Jubbaland, and believes new regional states are needed to overcome Somalia’s failed unitary system of government. These are Omar’s thoughts on the celebration, as a civically engaged Somali American:

Saturday’s event celebrated the newly formed state of Jubbaland and the importance of adhering to a federal system of government.

The celebratory event took place at Marriott City Center in downtown Minneapolis, and was heavily attended by a large crowd of Somali-Americans and many elected Minnesota politicians and mayoral candidates. The 2,000-plus attendees enjoyed an array of speakers, including a call-in from President-elect Ahmed Mohamed Islam (Madowe) in Kismayo, Somalia, entertainment and an all-around great night celebration.

Jubbaland State was formed on May 15, with the selection of President Ahmed Mohamed Islan (Madowe) and bending selection of parliament and cabinet members. The excitement expressed by the people has been astronomical. So far, there has been a celebration event similar to ours held in every major city worldwide with a significant Somali population.

Jubbaland state consists of three states in southern Somalia, previously a hotbed for warlords and terrorists. Hope is being restored as the residents take advantage of the federal constitution and charter. After 22 years of devastating civil war and a virtual absence of governmental institutions, Somalia formed a new government led by Hassan Sheik Mohamud, who was elected by parliament to rebuild federal states of Somalia from the ashes of the civil war.

Kismayo (the capital of Jubbaland) offered refuge for me as a child running from war in the capital Mogadishu, and it has since been a place of unimagined violence. I was excited to celebrate its liberation and look forward to one day returning there as peace prevails. To my relatives still residing in Kismayo, I would like to congratulate them and urge them to not lose sight of this amazing opportunity to secure peace and prosperity.