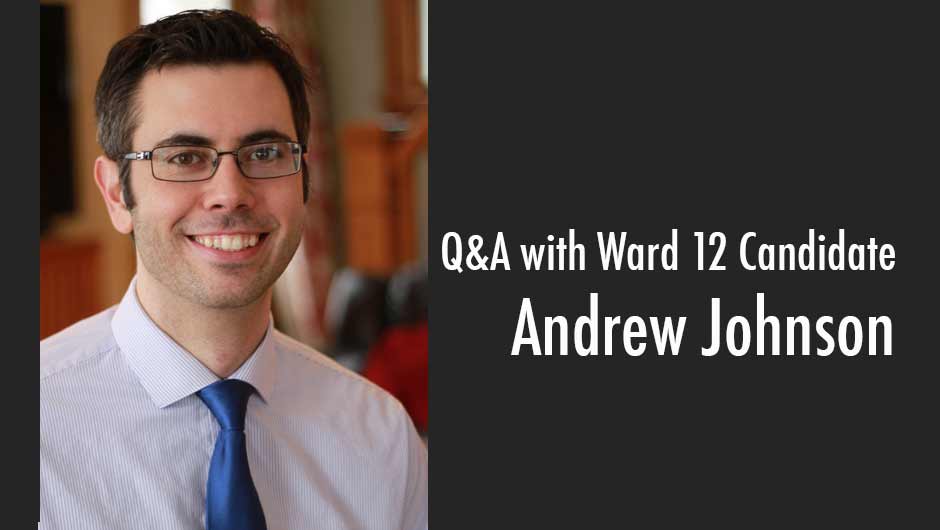 With the DFL caucuses coming up quickly, we wanted to find out more about the people running for City Council in our local wards. All candidates seeking DFL endorsement were invited to participate in our Q&A. Thanks to everyone who submitted questions for the candidates!

Today, we’re hearing from Andrew Johnson from Ward 12. He’s running against incumbent Sandra Colvin Roy. Find more information about wards and the DFL caucus at the end of this article.

1. For people who aren’t familiar with you, will you please introduce yourself in two-to-three sentences?

My name is Andrew Johnson, and I am the current President of Longfellow Community Council. I have worked tirelessly to improve our community, from revitalizing East Lake Street and supporting small businesses, to increasing participation and organizational transparency. I am extremely passionate about making the world a better place and have a variety of accomplishments outside of LCC, from empowering teachers through my educational non-profit and working to launch an urban agriculture startup, to pioneering the concept of a “taxpayer receipt” and getting a progressive environmental bill introduced in the state legislature.

2. In one-to-two sentences, why do you believe you are the best candidate for the job?

Our current council member is seeking a fifth term, and it’s time for a change. This is evident from a number of disappointing votes, such as denying residents their right to vote on stadium funding and a lack of partnership and availability which I have experienced firsthand as a leader in this community. I will always put you first and work incredibly hard to advance a progressive platform that will meet the challenges we face over the coming decade, making Minneapolis an even better place to live, work, and play.

3. What are the top two issues you see in your ward, and how do you plan to address them?

I love our small businesses. They make Ward 12 a vibrant and great place to live, not to mention the jobs they create, yet the city puts a lot of red tape in their way. Working on revitalizing East Lake Street and helping businesses across Longfellow, I frequently hear owners say, “if I could do it all over again, I would have opened up in St. Paul.” This is evidence of something gone horribly awry. I will work to eliminate unreasonable restrictions, streamline interactions and approvals with the city, and pilot form-based zoning. I will also bring neighbors to the table as partners in the process, follow our small area plans (a proactive process rather than the reactive use of variances), and actively support and encourage new businesses.

Public safety is another top issue. Crime is up in every category except for burglaries, arson, and prostitution. The third precinct response time for emergency calls is 8 minutes and 36 seconds on average, while it’s less than 5 minutes on average in Portland, Oregon which has a force of similar size and budget. We have zero gang intervention officers while Portland has ten, which means we’re missing an opportunity to intercept young lives headed down the wrong path and get them back on track. We also have chronically underfunded our restorative justice programs, which cost four times less than the traditional criminal justice path, have lower recidivism rates, and practice forgiveness and restitution instead of punishment. As an analytics expert, I believe we need to empower officers with data, so they can work smarter. We also need to utilize technology to better inform residents of public safety issues, especially in real-time. I will work with the MPD to shift their role from “law enforcement” to “serve and protect,” which includes getting officers out of their cars in favor of walking and biking the streets and rediscovering their social role in the community. Another aspect of public safety is our fire departments. The average firefighter is 46 years old, with none under 30. I support hiring a new class of firefighters to train under our existing veterans in order to head-off an attrition problem and reduce overtime costs due to injuries and retirements.

4. What are the top two issues facing Minneapolis, and what do you think the solution is?

While I believe providing excellent city services is essential, we can’t ignore foundational problems of government that linger and undermine Minneapolis. Working for a $50 billion corporation for eight years, I can see many inefficiencies and opportunities with how City Hall runs. The city recently earned a D- for spending transparency, and it’s incredibly difficult to see how your council member voted on an issue. We’re outsourcing IT services under a massive no-bid contract that is rife with wasteful spending (something the incumbent voted to renew without review). We need someone with the experience to solve these problems, and this is an area where I am particularly accomplished. I will lead the efforts to provide account-level spending details along with a taxpayer receipt that breaks down where your taxes are being spent. I will lead the efforts to implement a website summarizing each vote of every city council member, allowing residents to easily see how they are being represented. I will take on wasteful spending and use my experience in streamlining processes and forming partnerships to ensure collaboration not only among city departments, but between the city, neighborhood organizations, county, state, and non-governmental organizations. Taking on these often ignored issues will maximize the quality of the services we provide, make sure we’re getting every dollar’s worth, and being accountable and honest with residents.

Standing before the African American DFL Caucus, I couldn’t help but feel like they’ve heard every promise imaginable from Caucasian candidates over the years. The simple fact is, our residents of color are not well represented via the city. Disparities among neighborhoods of color are shocking, and all of the issues are interrelated: infrastructure, economic prosperity, education, crime, health, and civic engagement. If we strategically address the chronic disparities of disadvantaged neighborhoods, which are predominantly minority strongholds, we can disrupt the cyclical nature of inequality. I view this as not only a moral imperative but an absolute necessity for a strong Minneapolis in which we are a safe, friendly, efficient, and prosperous city.

5. Should the Hennepin County incinerator (HERC) be allowed to burn additional garbage? What do you think is the solution for the HERC’s request to expand and how does that weigh against pollution and air quality issues in Minneapolis?

Absolutely not! The burner emits horrible toxins: lead, mercury, dioxins, and many more poisons and volatile organic compounds (VOCs). The 1986 environmental impact statement (EIS) models predicted plumes of pollution from the burner affecting South and North Minneapolis alike. Currently, the plumes blow over Target Field during many game days. We’ve seen elevated levels of childhood asthma and lead in children’s blood that correlate with the models from the 1986 EIS. As a result, rates of respiratory conditions are higher in Minneapolis than in neighboring suburbs. While HERC is not the sole contributor to urban pollution, it has a large impact. Sadly, Minnetonka and St Louis Park generate two-thirds of the trash burned at the facility, which means our residents suffer health consequences in order to convenience the suburbs. I would deny HERC’s request to expand and work with the city attorney to explore potential solutions to shut down the facility, such as an ordinance banning the transportation of garbage into the city for burning.

6. Do you believe that bicycle and pedestrian facilities should be expanded in the city? If so, how do you plan to support continued development?

Yes. As an avid cyclist, I strongly support protected bikeways throughout our city and believe this is essential to increasing the number of riders and commuters. I look to several other countries and cities that have championed bikeways as models for how Minneapolis can do it. Protected bikeways also raise the status of cycling and offer an increased degree of equality in our society which has largely put fossil fuel vehicles on a pedestal. Further, I support requiring all large buildings to provide onsite secured bike storage and showers for commuters, and I will work closely with the Bicycle Advisory Committee and other cyclist advocacy groups to explore additional ways to support bikers. An important note to constituents: Sandy Colvin Roy was one of only two council members who voted to eliminate the city’s bicycle coordinator position.

Walkability is also a huge focus of mine. Improving walkability takes place in a number of ways, from a heavy emphasis in our small area plans, to reforming parking requirements. It is also largely influenced in the design of developments and can perhaps best be qualified under my support of New Urbanism as a design and development strategy. So yes, walkability is on the shortlist of my considerations for every single vote and action I will take on behalf of our community.

Yes. I also believe we need to reintroduce streetcars into our transit portfolio. They are electric, quieter, can carry more people, are more accessible, and will result in drivers exercising more caution. Most importantly, streetcars are permanent infrastructure that sends a positive signal to homeowners and developers which will result in greater economic prosperity and property values.

8. Should Minneapolis Animal Care & Control be reformed to follow a no-kill shelter model?

Yes. Currently, Minneapolis Animal Care & Control reports that 91 percent of “adoptable” animals move on to homes, but that number omits a large number of animals which are considered “unadoptable” for various reasons. Many of those reasons include correctable behavioral issues that other organizations, such as the Animal Humane Society, have training programs to correct. In actuality, the euthanasia rate is at least 41 percent of all animals under the care of MACC. I have met with animal lovers and volunteers to hear testimony on the shortcomings of MACC and will seek to address these issues that ultimately cost lives. Other cities, such as San Francisco, have been able to implement no-kill shelters with great success, and I believe Minneapolis should follow this path.