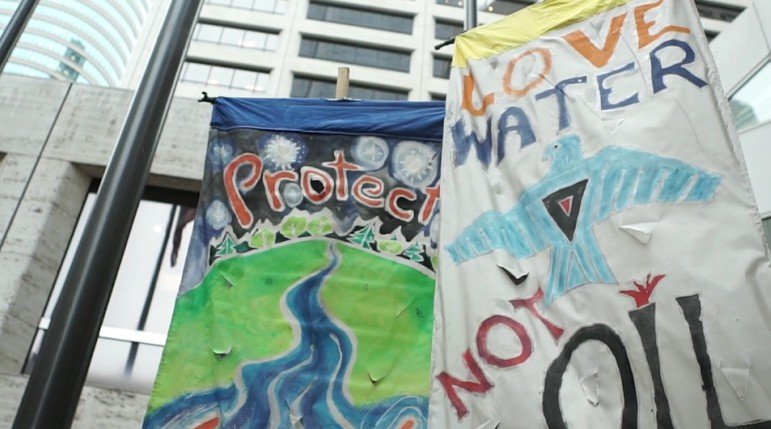 On Sep. 7 banners wave at US Bank Plaza to protest digging for the Dakota Access Pipeline. Photo by Xiaolu Wang.

On the morning of September 7th, protesters of the Dakota Access Pipeline gathered near the law offices of Fredrikson & Byron, located in US Bank Plaza in downtown Minneapolis, to demand Dakota Access, LLC be dropped as a client. This action was led by Ashley Fairbanks and Arianna Nason and supports the ongoing efforts by the Standing Rock Sioux Tribe to stop construction of the $3.8 billion Dakota Access Pipeline at the Camp of Sacred Stones, North Dakota, where protests began last April.

The Dakota Access Pipeline plans to transport crude oil 1,170 miles from North Dakota to Patoka, Illinois. The proposed route runs through sacred Indigenous burial sites and across the Missouri River. Water Protectors – a term coined by Native demonstrators in North Dakota – are concerned that the pipeline will rupture and contaminate water sources for millions of people.

Even with protests nationwide, including in Minneapolis, U.S. District Court Judge James Boasberg rejected a request by the Standing Rock Sioux Tribe to stop construction on the pipeline. However, the Army, Department of the Interior and Department of Justice announced Friday that permits would not be issued for Dakota Access, LLC to drill under the Missouri River until the Army Corps can reconsider their already issued permits.

In this Community Voices video, protesters gather at US Bank Plaza to call for a stop to the Dakota Access Pipeline.

Call Fredrikson & Byron and tell them to drop Dakota Access LLC at 612-492-7000.
Find out more information about the Dakota Access Pipeline here.