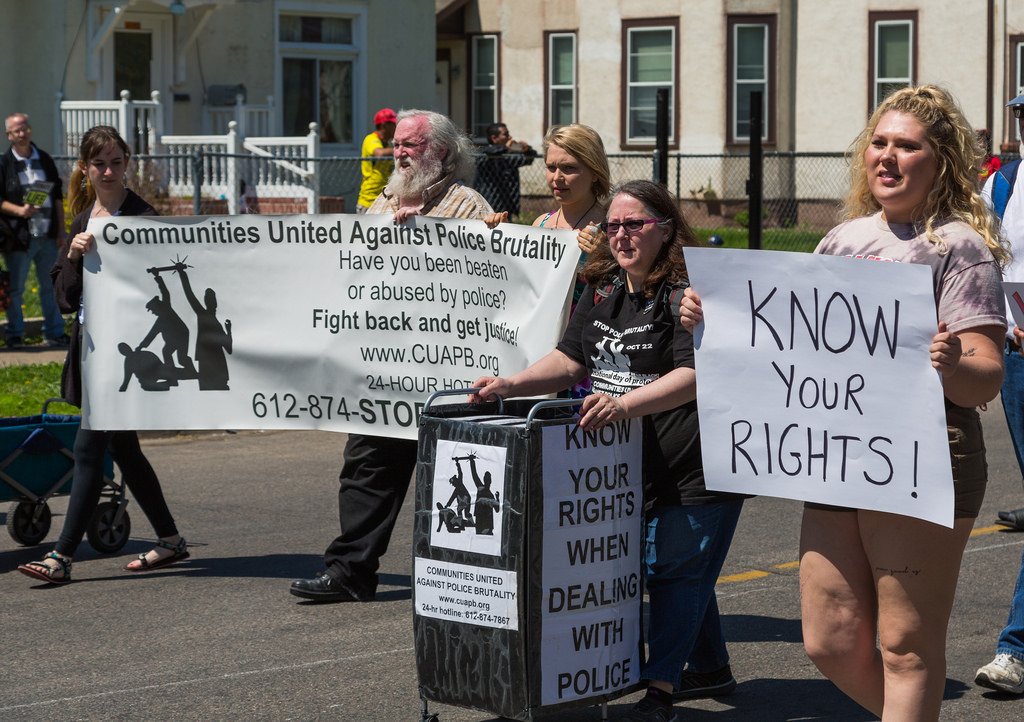 Communities United Against Police Brutality march during the 2017 May Day Parade in Powederhorn, Minneapolis. Photo courtesy of Tony Webster via Flickr.

The tragic killing of yet another community member, Justine Damond, by a Minneapolis police officer has exposed to the world the many problems with our police department. These problems fall squarely at the feet of our city leaders. Mayor Betsy Hodges, the Minneapolis City Council and police leadership have all failed in their oversight of the Minneapolis Police Department (MPD), bringing us to the place where unarmed community members are killed by police officers year after year with impunity.

The Justine Damond incident has revealed to the community significant flaws with the department’s body camera policy. However, these flaws were well-known by city officials and department leaders long before the body camera program was implemented. The Police Conduct Oversight Commission, the agency tasked with reviewing police policies, wrote an exhaustive report on body camera policy best practices and included policy recommendations based on their own research and feedback from a number of community sessions. These recommendations were virtually ignored. Our organization, Communities United Against Police Brutality, and others also warned against flaws in the MPD’s draft body camera policy. Yet the City Council granted $6.4 million to the MPD to purchase the devices without seeing a policy first. Two days later, MPD leadership released their final policy which was identical to the draft policy. Since then, there has been no review of this very expensive program. Recently, KSTP revealed that officers equipped with body cameras have captured only five to six hours of footage per month.

Three years earlier, the city shut down the Civilian Review Authority in a secret process. All complaint adjudication was moved to the Office of Police Conduct Review (OPCR), a hybrid agency controlled at all levels by police and city staff, with almost no actual civilian participation. The Civilian Review Authority was flawed but still sustained a reasonable percentage of complaints. In its four years of existence, the OPCR has sustained and disciplined 0.4 percent of complaints from community members. The average sustain/discipline rate of similar bodies across the United States is 5 to 7 percent. Minneapolis police officers know there are no consequences for failing to follow policy.

In more recent history, the city used specious arguments and slick legal maneuvering to keep a measure off the ballot that would have required police officers to carry professional liability insurance. In the proposed ballot measure, the city would pay the base rate for this insurance but officers themselves would be responsible for increases in premiums resulting from the lawsuit payouts they caused. This measure would have incentivized good policing and provided a consequence for officers who engage in bad policing – an especially important concept given the poor record of the OPCR in holding officers accountable.

For a very long time, the police federation has wielded inordinate power, most recently forcing the police department to roll back changes to the deadly force policy that would have increased safety for the community. If city leaders continue to bury their heads in the sand, it is only a matter of time before another innocent victim is killed by the Minneapolis police.

Michelle Gross is the president of Communities United Against Police Brutality.