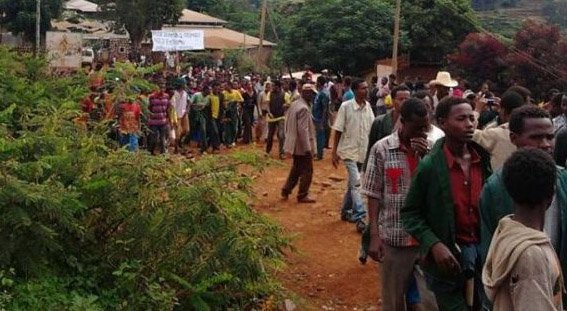 Since April 25th, thousands of high school and university students across Ethiopia’s largest region, Oromia, have turned out in peaceful protest against a government land grab that stands to displace millions of indigenous peoples from their ancestral lands. Even though the country’s constitution theoretically allows for peaceful demonstrations, the student protesters, along with local populations in many cities and towns, have faced a ruthless crackdown from Ethiopian Special Forces, known as the Agazi Commandos. These forces have used excessive violence by indiscriminately shooting into crowds in an attempt to quash the protests. Children as young as eleven years old have been killed, according to statement issued by Amnesty International on May 13, and reports of fatal injuries, torture, imprisonment, disappearances and killings have been coming out of Ethiopia since then.

The current Ethiopian government has evicted millions of indigenous peoples from their homelands at gunpoint under the pretext of “development” since it took power. In and around the capital of the country, Addis Ababa, over 200,000 of these residents have been removed from their lands without proper compensation since 2005. The newly-announced Integrated Development Master Plan for Addis Ababa (known simply as the “Master Plan”) seeks to legalize past land grab activities and to consolidate larger areas of territory displacing native peoples from their land. The Master Plan will expand the territory of Addis Ababa city administration to about 25 times its current size and is expected to forcefully remove another four to five million Oromo peasants from their lands within the coming years.

The current Ethiopian government came to power in 1991 replacing the military regime that preceded it (19974-1991). Back then, it was viewed by much of the West as a government that will facilitate Ethiopia’s transition from an ex-communist country to a liberal democratic one that is also friendly to Western interests in the Horn of Africa region. It is a government dominated mainly by elites from a single ethnic group, the Tigray, which constitute approximately six percent of the peoples within Ethiopian boundaries. The Ethiopian Agazi special Commando force is almost entirely Tigrayan. The government relies on this ethnic army to stamp out the Oromo student protests. There are reports that the entire security apparatus, including the national army, is dominated by elites from Tigray. The Oromo, who are targeted by this Master Plan, constitute between 40-50% of the population. Operating in a historical context whose political tradition is authoritarian and having ethnic Tigrayan aspiration to hegemony, the transition faltered and repressive authoritarianism continued regardless of the rhetoric of constitutionalism, rule of law, democracy, human rights, and free market. The history of uneven inter-ethnic relations and the increasing demand for equality and justice by the ‘other’ peoples of Ethiopia who never readily featured in the discourse on Ethiopia intensified the political tension while also polarizing views on the interpretation of history, especially between the Oromo and the Amhara-Tigrayan Abyssinian core.

The current crisis cannot be understood apart from the ethnic dynamics at play in the policy of the Master Plan and in its response. In the Ethiopian political, social and economic system, ethnicity is probably the most important factor which influences policy preferences and choices of different sectors or communities in Ethiopia. Over eighty ethno-linguistic groups exist in Ethiopia. This ethno-linguistic diversity was not always recognized. The elites from Tigray and the Amhara dominated the politics of the country. For a long time, the Ethiopian state policy on ethnic diversity was an involuntary violent incorporation of territories and involuntary assimilation of peoples into the dominant Abyssinian cultural core often called by some historians the Geez civilization. In response to the challenge of diversity (raised in the 1960s as the ‘Question of Nationalities’), ethnicity gained political salience in the process of restructuring the state since the current regime came into power in 1991. Consequently, a formal system of Ethnic Federalism, otherwise referred to as multinational federalism, has been instituted and written into the law as the centerpiece of the Constitution of the Federal Democratic Republic of Ethiopia. Oromia, where most Oromos reside, is legally recognized as one of the nine constituent states of the Ethiopian Federation.

In practice, however, all the key government positions and institutions are controlled by elites—directly and indirectly—that come from the Tigrayan ethnic group. Key positions in security sectors, including the military, are exclusively under the control of Tigrayan rulers. The system operates on the basis of patronage and a relationship of clientele with a select cadre of most of the ethnic groups who are co-opted to pose as representatives of the other ethnic groups in Parliament and in Government. While this Tigrayan-dominated regime uses this as a manifestation of its ‘just’ response to the ‘national question’ that long troubled Ethiopia’s politics, the elite from this same group aggressively pursues policies that have drawn on the military might to forcefully remove Oromo peasants from their homeland over the last decade or more. Situated in this context of a history of forced dispossession of land and the consequent displacement, this new Master Plan for Addis Ababa, is viewed and resisted by the protestors as one more chapter in implementing a disastrous policy that has already displaced thousands of the native peasants, and now officially aims to displace millions more. In keeping with their former legacy of sheer brutality, the Tigrayan ethnic armed force, the Agazi, responded to peaceful gatherings with a rain of bullets.

The brutal crackdown on the Oromo people is not new. From the start of its creation in the late 19th century, the modern Ethiopian state has been predicated upon the expropriation of Oromo lands and held together through violent assimilationist policies, the destruction of the identity of conquered and resistant people, and economic and political exploitation of groups who are not represented in government. With each changing regime state power has been retained in the hands of minority rulers and the Oromos, who are the largest group living on the richest land, have remained the main targets of Ethiopian state repression, terrorism and discrimination. Over the last two decades alone multiple human rights organizations have released reports documenting the extent of extrajudicial killings, mass imprisonment, and torture on a massive scale, mutilations and disappearances. For instance, as of May 2012, the Oromia Support Group reported 4,407 extra-judicial killings and 992 disappearances of civilians perceived to support the political and even social groups opposing the current regime. Most of these have been Oromo people.

It is within this context that the current violent response to Oromo protests should be understood and appreciated. Like it has always been, kidnappings and/or extrajudicial killings, arbitrary arrests and disappearances continue in different parts of Oromia Regional State. Those being imprisoned face an imminent danger of death, torture or disappearance. Yet despite the fact that the situation is quickly deteriorating, it is going largely unreported in the international media. The Ethiopian government is notorious for keeping very tight control over all local and international media in the country. Information is not easily attainable. Independent journalism and human rights monitoring are securitized and criminalized. Major restrictions remain on exchange of information, as the government is known to block almost all websites it regards as forums capable of providing information about the atrocities committed by its security agents. These include all independent websites that are situated both in and outside of Ethiopian territories. Given these circumstances, it has not been possible to determine the exact number of victims of the recent retaliation against Oromo protesters. But thanks to social media and mobile technology, a view of the scale of the crisis is emerging.

Some human rights organizations have managed to get limited information and offer an insight regarding what is taking place as the protests continue. For instance, according to the above-mentioned statement released by Amnesty International, hundreds of those arrested during the protests have been held at different detention centers, including at unauthorized places such as police and military training camps. Detention in these places is almost always arbitrary, with prisoners spending months and years without being formally charged or taken to a courtroom. As the Amnesty International report notes, “military camps in Oromia have regularly been used to detain thousands of actual or perceived government opponents.” These detainees are not allowed access to lawyers or relatives, usually throughout the duration of their detention. In many instances, relatives do not know where their loved ones have been taken upon arrest. Human rights organizations, including Amnesty International have received reports of torture on a massive scale at these unofficial holding places.

In addition to Amnesty International, other human rights organizations have also released statements of concern that recent detainees face imminent risk of torture and abuse, if not death. Human Rights Watch reported that security forces beat and shot at peaceful Oromo protesters in many towns in Oromia Regional State, among others, Ambo, Nekemte, Gimbi and Jimma. The Human Rights League of Horn of Africa has also issued a report citing torture and disappearances in places where student protesters are being held in Naqamte, East Wollega zone. In one instance alone, fifty detainees were taken away by security forces in Naqamte. Their whereabouts remain unknown.

The crisis in Ethiopia is a major international story of mass protest, wholesale dispossession of millions of peasants, and state-sponsored violence. Yet it has gone almost completely ignored in the international media. To be sure, the story has attracted fleeting attention from English-language outlets like the BBC and the Guardian, while Al-Jazeera has curated what little information trickles out of the country from social media users on the ground. But sustained analysis of the causes and context of the government’s plan, the protests in response and the violent government crackdown have been hard to come by.

There are a number of reasons the story hasn’t grabbed attention around the world—the situation’s complexity, the tight control of information by Ethiopian authorities, and western journalists’ unfamiliarity with Ethiopia’s tense ethnic politics, to name just a few. But the bigger issue has to do with Western media bias. Over the years, a considerable amount of attention has rightly been given to bloggers and journalists whose individual rights have been violated by the Ethiopian government. This is not surprising. It is easy to sympathize with those trying to practice their freedom of expression or tell a difficult story in the face of authoritarianism. The repression of media in a given country is an easier account to give, and it is a simpler story to process. The miseries and violence of the other repression—that against the voiceless masses—cannot afford to be get lost in the shuffle, as the situation in Oromia makes clear. As long as this bias remains salient, the deaths of hundreds, possibly thousands, will continue to go unreported and unrecognized, and the cause for which so many have sacrificed will remain hidden.

*Ayantu Tibeso is a researcher and communications consultant based in North America. She can be reached at atibeso@gmail.com or on twitter @diasporiclife

A shorter version of this article was originally posted at Warscapes.com.