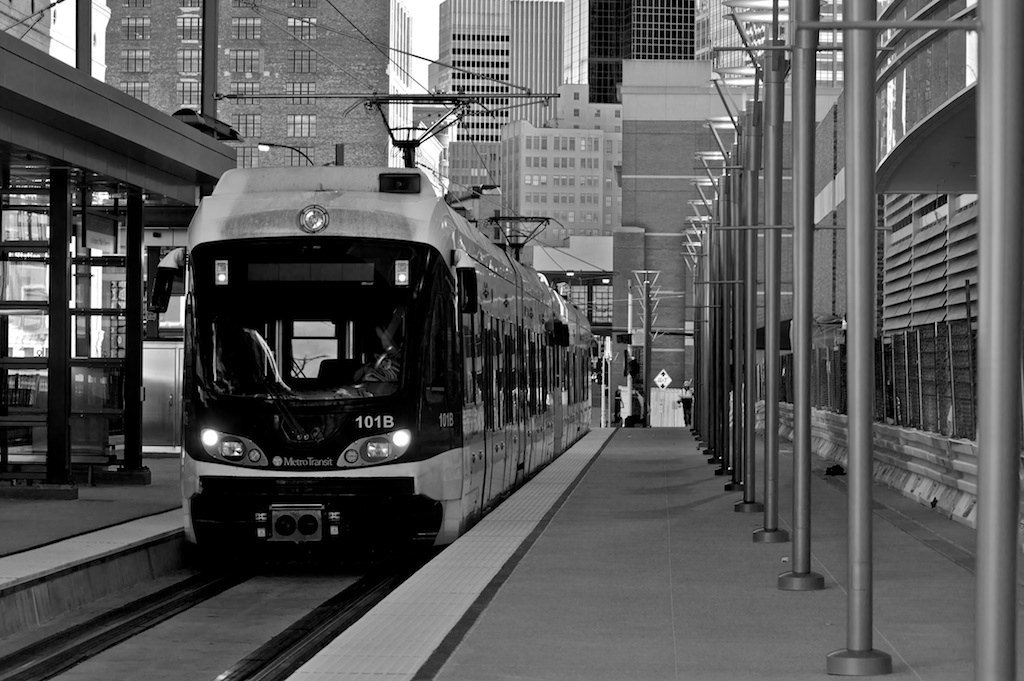 Target Field station in downtown Minneapolis will be the northernmost stop on the proposed Southwest LRT. Photo courtesy of Maury Landsman via Flickr.

Southwest Light Rail Transit (SWLRT) is the most expensive public works project ever proposed in Minnesota. Hennepin County’s share of the SWLRT funding worth nearly $656.65 million of the $1 billion project, according to the Southwest Journal, a good portion of which will be paid by a county sales tax increase. Sales taxes are regressive and have the biggest impact on low-income residents, and include most services, gasoline, cigarettes, alcohol – pretty much everything but clothing and grocery food.

People who support Southwest LRT because they support light rail in general might consider that the air-conditioned, Wi-Fi equipped buses from Eden Prairie to downtown Minneapolis currently take 20-minutes while the light rail would take 41-minutes.

The proposed track of SWLRT in Minneapolis city limits is through residential and parkland areas, not densely enough populated to obtain high ridership. Each ride would be subsidized by county taxpayers at the rate of approximately $20.

SWLRT was developed by the George W. Bush administration, former state Sen. Julie Sabo noted in a 2011 Twin Cities Daily Planet article. The most important factor “was for rail service to provide time saving, direct, no transferring needed, rides to people living in suburbs and exurbs into downtown.”

Sabo continued, “Neither urban communities nor environmental impacts were prioritized in federal criteria until after President Obama took office, and the alignment had already been selected. As a result, SWLRT is suburban-centric and avoids urban density and economically stressed communities in the city. It will do what it was designed to do, promote suburban development and enter and exit the city quickly.”

SWLRT in Minneapolis is planned to run in a narrow corridor between backyards, condominiums and heavy freight trains that carry highly flammable ethanol and oil. It would track through a residential area and then in the parkland between Cedar Lake and Lake of the Isles.

The route would eliminate a 44-acre urban forest and the popular Kenilworth commuter bike trail at least during the two-year construction period. It would include a submerged half mile long tunnel with solid steel sheet sides pounded down 55 feet to anchor the train that would otherwise pop up and down with fluctuating groundwater pressure.

The tunnel would be permanently dewatered daily according to the Burns & McDonnell water study (2013-14) for the Metropolitan Council. The study theorizes a rate of 15,000 gallons per day dewatering from inside the tunnel into sanitary sewers, which were not built for that much fluid traffic. The water would run through treatment facilities and fed into the Mississippi River.

Another 9,000 gallons per day from around the tunnel would be piped into storm sewers, treated, except for chlorides (salt) and returned into the groundwater.

The Burns-McDonnell water study continues, “Impervious steel sheet pile walls…will extend ten or more feet beneath the water table in some areas and, therefore, [have] the potential to block horizontal groundwater flow and potentially result in an increase in water levels.” Which means flooding.

The possibility that flooding would affect the groundwater level, the freight line, the proposed shallow tunnel, the Bryn Mawr-Penn Avenue LRT station, and nearby residences – is not elaborated. Lake levels, water quality and the absorbency or contraction rate of land denuded of trees, deep-rooted prairie vegetation planted along the trails and everything from fish and frogs to coyotes and owls – are financial “externality” issues.

SWLRT would also result in the loss of approximately 60 acres of habitat and impact 20 wetlands.

The Cedar Lake commuter bike trail is laid atop the old Cedar railroad yards – on top, which is why pollution remediation was not required. A toxic plume could ooze into the construction-disturbed ground and groundwater. Turning our living lakes into scenery would be irreversible. 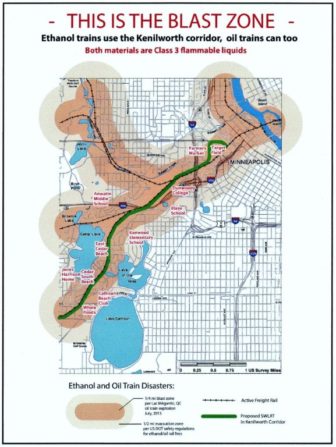 The ethanol and oil-carrying heavy freight trains co-locate along about eight miles of the proposed SWLRT electric track but only one mile is protected by the wall because of regulations.

But isn’t it worth it to get all those cars off the road?

The final environmental impact study finds that “The Project operation will increase the greenhouse gas emission in the Twin Cities area by approximately 2,000 metric tons per year in 2040, compared to No Build alternative” (SWLRT FEIS, p. 3-204). That is, SWLRT adds to the annual projected regional total of greenhouse gas. In terms of meeting the state’s greenhouse gas reduction goals, it would be a net benefit to Minnesota to not build SWLRT.

Greenhouse gas reduction from LRT is contingent upon the route. The proposed track of SWLRT in Minneapolis is through residential and park areas, not densely enough populated to obtain high ridership. If SWLRT had been scoped through Uptown or the Northside it would help more people, and more might be on board.

Considering what good we could do with a billion dollars, SWLRT looks absurd. Personally I would invest in children and water.