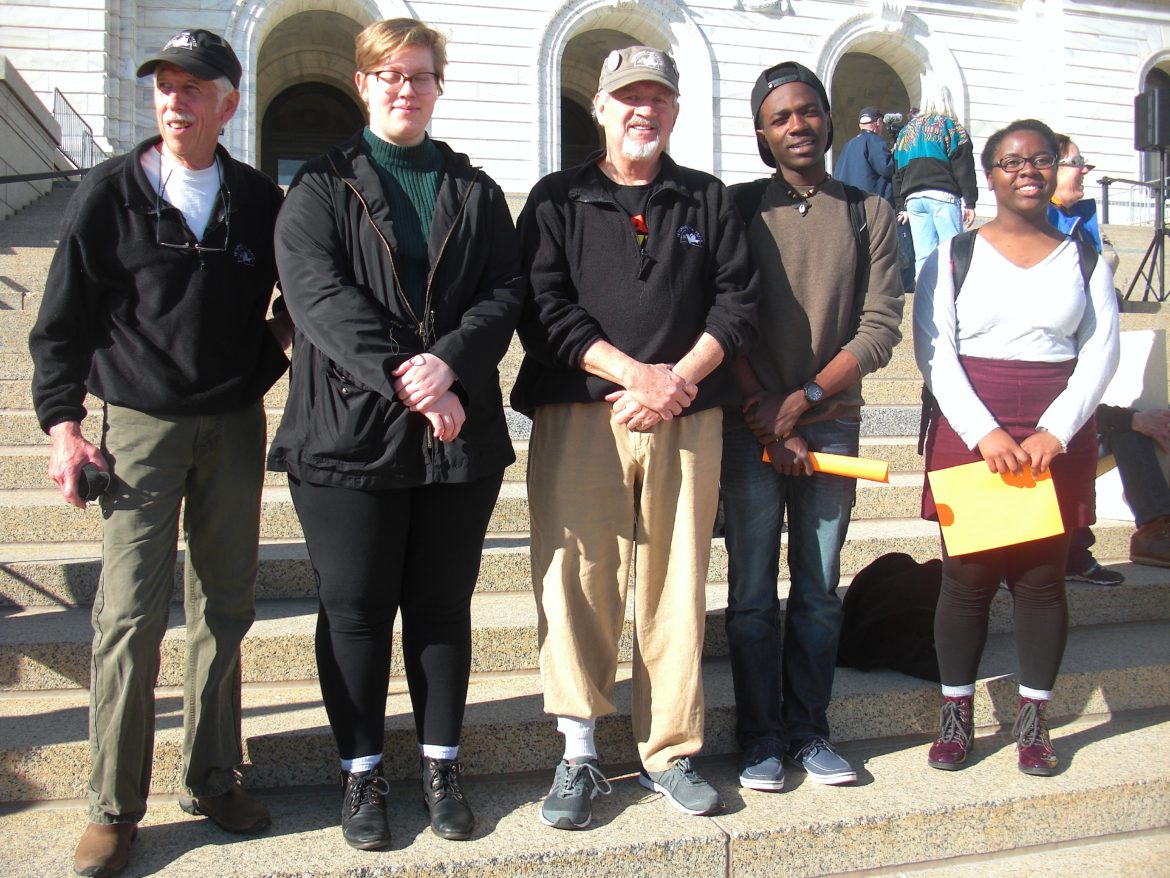 We are millennials, a generation that doesn’t remember a time when the United States hasn’t been at war. In other words, we’ve never known a time of peace. Our understandings of war and state violence have been shaped by Iraq, Afghanistan, Ferguson, Baltimore, Syria, Standing Rock, and the deaths of Jamar Clarke and Philando Castile.

The Vietnam War refers to a period of history experienced by people who are the same age as our grandparents. However, over the past few months we’ve studied the Vietnam War and the antiwar movement in an independent tutorial led by Macalester College professor Karín Aguilar-San Juan, learning how Vietnam was an important point of convergence for many people, from hippies to yippies to anti-imperialists, Black Panthers and members of the American Indian Movement. Looking at the Vietnam War this way has anchored our understanding of present-day struggles in a long and rich history of anti-war mobilization.

We began our Spring semester by studying a controversial speech that Rev. Dr. Martin Luther King Jr. delivered on April 4, 1967 titled “Beyond Vietnam: A Time to Break the Silence.” He described the United States as “a society gone mad on war,” intentionally pulling resources away from programs designed to alleviate urban poverty “like some demonic suction tube.” Dr. King pulled no punches. He highlighted the irony of recruiting racially and economically oppressed people to fight for freedoms abroad that they had yet to experience at home.

“We were taking the black young men who had been crippled by our society and sending them eight thousand miles away to guarantee liberties in Southeast Asia which they had not found in southwest Georgia and East Harlem,” King said.

The speech included a careful and lengthy analysis of the history of Vietnam’s struggle for national independence going back to its battles against French and Japanese occupation at the end of World War II and continuing into the next decades with the appearance of U.S. soldiers as “strange liberators.” This analysis is often missing from high-school history textbooks or other contemporary discussions about the Vietnam War. Perhaps most shocking, King denounced the U.S. government as “the greatest purveyor of violence in the world.”

At the time, King’s messages were painful to digest, and his advisors feared that linking the war in Vietnam to racism and economic oppression at home would somehow damage the movement for civil rights. According to the historian David J. Garrow, the New York Times and the Washington Post reacted badly, labeling King’s antiwar stance as a “mistake” based on a “facile” view.

It’s impossible to treat this speech as a dusty relic of the 1960s when so many of its themes are frustratingly relevant today. On April 4, 2017 we put our books down and left campus so that we could attend a 50th anniversary event designed to honor and reinforce King’s important speech. On that clear and sunny afternoon, a small but fervent group of Vietnam War-era veterans representing Chapter 27 of the Veterans for Peace occupied the steps of the Minnesota State Capitol. Armed with a makeshift podium, a microphone, a banner, and a couple of colorful handmade posters, they took turns reciting the speech.

Following the reading, we went to dinner at Ngon Bistro on University Avenue with three Vietnam-era veterans: Dave Logsdon, Mike Madden and Larry Thorne. Over noodles and crispy rabbit fritters, they shared their stories with us about where they grew up, why they joined the military and how they developed their antiwar views. They also asked us questions about where we came from and what our parents and grandparents told us about the Vietnam War. During this discussion, the veterans highlighted that opposing war, then or now, is not a one-off thing because so many issues are connected. We began the evening with questions about the antiwar movement, and minutes later we were talking about Standing Rock, environmental justice, and the Boycott, Divestment, and Sanctions (BDS) movement. Clearly, for these three men the Vietnam War was their entry point into political activism, but it is not the only issue they care about.

The three of us were clearly the youngest to attend the event at the State Capitol. Many of the veterans probably actually remember the day Dr. King gave this speech; we became familiar with the speech just a few months prior because it was our assigned reading. But it wasn’t hard for us to see the necessity of making connections between state-sponsored violence at home (the killing of Philando Castile and so many others) and wars fought abroad. We are lifetime witnesses to such conflicts even if we are not often invited to make these connections explicit.

These days we’ve sometimes felt a disconnect between older and younger generations in discussions surrounding movements against state violence. Too often, neither side fully understands or appreciates what the other has done, continues to do, or might consider doing in the near future. We have different ideas about what money or social media can do, or how we can use them to our advantage. Our personal interactions lead us to prioritize different sides of a multifaceted problem. As a result of our study of the Vietnam antiwar movement, we’ve gained a better understanding of movements for peace as important efforts to collectively raise consciousness, regardless of age or culture. We believe it is important for younger generations to generate new ideas and momentum for ongoing struggles. And we also see the tremendous value of intergenerational dialogue as a crucial opportunity to build insight, learn from the past, and move into the future.

At the end of the reading that day, an elder handed one of us a bright orange flier announcing a speaker on Iraq. Clearly, her concerns and commitments haven’t been frozen in time. The continuing activism of elder antiwar activists helps boost our sense of history – and fuel our own hopes for peace.