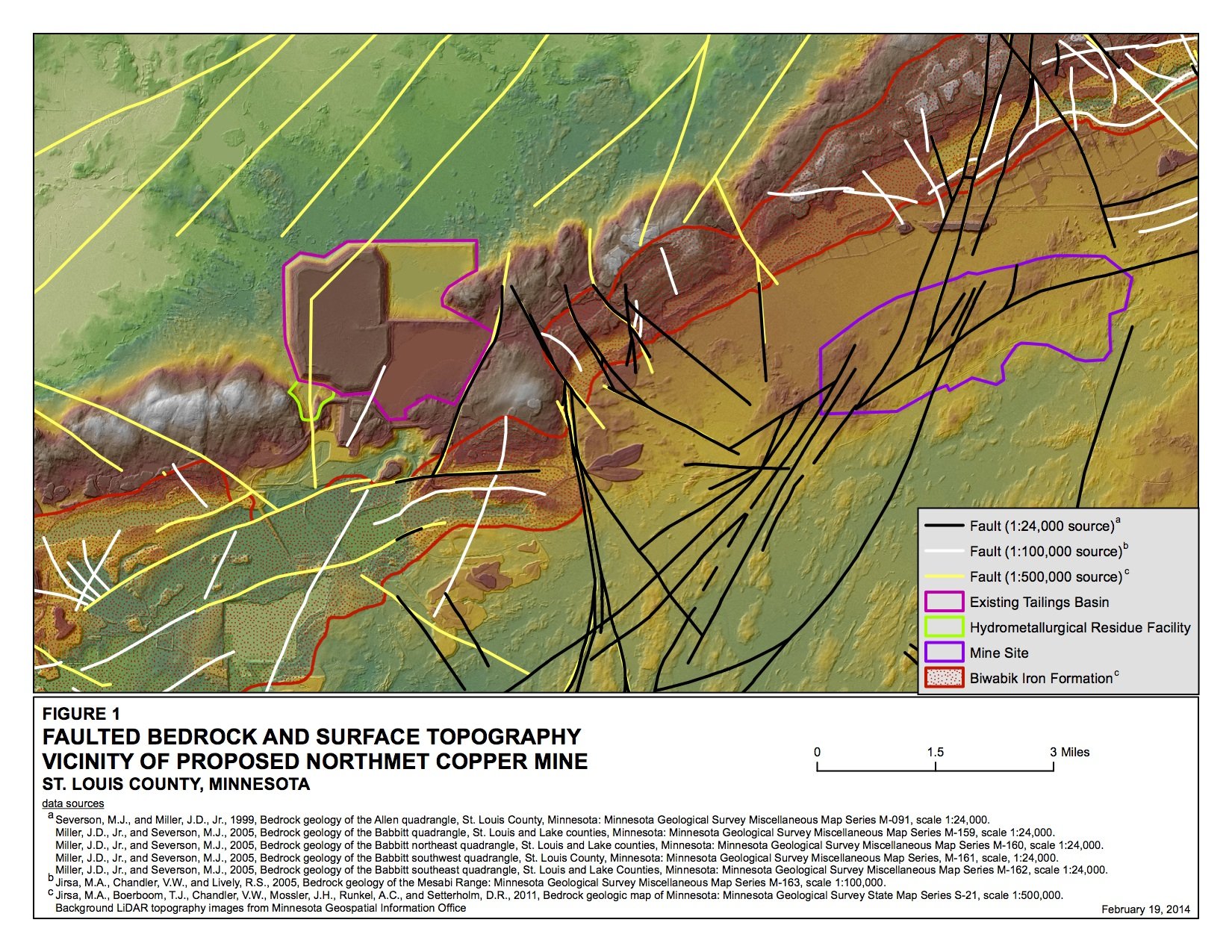 In January, the Ely Timberjay broke the story that PolyMet’s Supplemental Draft Environmental Impact Statement (SDEIS) had a problem; its water flow modeling was flawed. Definitely a big problem when the Minnesota Department of Natural Resources (DNR) seriously underestimated the amount of water available to transport pollutants. Perhaps a show-stopping problem; the DNR is not talking. The Tribes have been saying for years that water flow numbers were wrong.

The DNR’s troubles have just begun. PolyMet’s SDEIS has yet another flaw. This flaw could prove to be fatal, ending PolyMet’s Project. Symbolically, the Ides of March is coming up.

PolyMet’s SDEIS has sprung a leak. The projected seepage from PolyMet’s tailings basin and the Mine Site Category 1 waste rock stockpile has been grossly underestimated.

“PolyMet does not propose to line the Tailings Basin, nor is the existing LTVSMC Tailings Basin lined.” (SDEIS, p. 5-161) Just reading that a proposed tailings basin of approximately 2,900 acres in size, or four-and-a-half square miles, would be situated, unlined, on top of an existing, leaking, unstable tailings basin, also unlined, screams BIG TROUBLE.

As WaterLegacy’s attorney, Paula Maccabee, summed it up, “The SDEIS assumption of nearly perfect seepage collection is the critical foundation upon which all claims that PolyMet might comply with water quality standards downstream of the tailings piles rely. This assumption is unreasonable, unfounded, inconsistent with site conditions and inconsistent with the Modeling Work Plan methodology adopted by PolyMet”

The Co-Lead Agencies have not only made incorrect assumptions for base water flow, they have made incorrect assumptions for seepage of contaminated water (uncaptured and untreated). Simply put, they do not know how much surface and groundwater flows through the area; how fast, far, and where it flows; or how much contaminated water is escaping. Major underpinnings of the PolyMet Project knocked flying by the numbers. PolyMet’s house of cards has collapsed.

The claim that 99.38 percent of total seepage from the tailings piles will be collected and treated is reflected in, “Table 5.2.2-36 NorthMet Project Proposed Action Tailings Basin Seepage (gpm) During Operations,” on page 5-159 of the PolyMet SDEIS. This table states that, under existing conditions, there is a total of 2,020 gallons per minute (gpm) of seepage through the north, west and northwest flow paths, 1,811 gpm in surface seepage and 209 gpm in groundwater seepage. This Table and accompanying narrative then predicts that during operations, total seepage in these flow paths will increase to 3,380 gallons per minute, of which only 21 gpm will bypass the groundwater containment system.

However, the implicit assumption that total groundwater seepage at the tailings site would be 209 gpm (and, thus, total uncaptured groundwater would be 21 gpm during PolyMet’s operations) is incongruous given the volume of water in the tailings system.

During operations, the tailings site would receive a total of 7,241.9 million gallons per year or 13,769 gpm from Beneficiation Plant discharge to the tailings beaches and tailings pond. Other inflows to the tailings piles include 2,580 gpm of untreated water from the tailings seepage capture systems and 1,250 gpm of mine site process water effluent from the WWTF in addition to approximately 4,600 to 4,800 gpm from precipitation.” (WaterLegacy has the citations for all of these numbers)

That is a whole lot of water! (No allowance for a 500-year storm event).

So we are being led to believe that only 21 gpm would be uncaptured seepage during PolyMet’s operations; just 21 gallons per minute of toxic seepage from PolyMet’s four-and-a-half square mile (already leaking) tailings basin. Absurd.

Actually, I rather liked the way Maccabee put it at the House Natural Resource, Environment, and Agriculture Committee hearing (on financial assurance and PolyMet), “Even Mary Poppins, who’s practically perfect in every way, would not attain that value of collection.”

When the preliminary SDEIS was circulated in the summer of 2013, just as they had with base flow, tribal staff questioned whether the claims for capture and treatment of groundwater were realistic.

The Co-Lead Agencies responded to their concerns: “Groundwater containment with slurry walls and permeable trenches has been routinely performed at mine and industrial sites over the last 50 years. There are hundreds of currently operating systems. When geologic conditions are favorable (particularly the presence of a low permeability basal unit that can be keyed into), it is typical to achieve greater than 90 percent groundwater capture.” (SDEIS)

Funny thing, the Co-Lead Agencies just neglected to put any examples of those “hundreds of currently operating systems” in the SDEIS. Through a Data Practices Act Request to the DNR by WaterLegacy, it was discovered that the only example the lead agencies had (of field experience with tailings seepage pump-back) was a study to estimate possible seepage collection at the Minntac tailings basin. And, records obtained from the US Army Corps of Engineers through a Freedom of Information Act Request, indicated that the seepage collection system at Minntac had an approximate return rate of only 50%!

But where had I read that kind of empty phrasing before, other than the SDEIS? Then I recalled the “Water Quality Fact Sheet” on PolyMet’s website: “Water control and treatment methods have been used successfully in mining and many other industrial and municipal applications for decades. They will be used at the PolyMet site to meet all applicable water quality requirements.” No examples. Meaningless.

Saying so does not make it so. PolyMet’s SDEIS is replete with this type of empty phraseology – with no examples and no proof, incorrect assumptions and miscalculations.

Maccabee wrote, “PolyMet’s SDEIS modeling explicitly assumes that its row of pumps will capture 100 percent of the surface seepage and 90 percent of the 209 gpm of groundwater seepage on the north, northwest and west sides of the tailings site. (SDEIS, p. 5-159)

… By analyzing no other release of untreated seeps from the tailings site, the SDEIS also assumes that no seepage will be released into Second Creek and that no seepage will drain into groundwater beneath the vast, unlined tailings piles through fractures and historic streams or as a result of changes in topography as tailings are deposited. Each of these claims is unreasonable and unfounded.”

So, WaterLegacy set out to analyze what the Co-Lead Agencies ignored.

It is impossible to put twelve pages of the results into a Community Voices piece, plus maps and documentation. I know because I tried. Following is one of the glaring examples of lack of scientific data concerning uncaptured seepage in PolyMet’s SDEIS – scientific data vital to the protection of our waters that is missing or misinterpreted.

The PolyMet SDEIS released to the public made no mention of fractures under the tailings basin – not one – even though the Preliminary SDEIS (PSDEIS) referred to “fractured bedrock” under the site. Even though, at a scale of 1:500,000, a 2011 statewide compilation of bedrock geology showed at least one long fault line running beneath the tailings site.

It is reprehensible that crucial pieces of the PSDEIS never saw the light of day in the SDEIS – that a water treatment facility operating, “for perpetuity,” was redacted. Or that “fractured bedrock” under a tailings basin sank out of sight by the time the SDEIS was released. The EIS process is not supposed to be some kind of “ hide and seek” game with the public.

Maccabee : “It is highly probable that if assumptions regarding collection and untreated release of tailings seeps were changed to be more consistent with field experience and site conditions the results would substantially change all water quality predictions downstream of the tailings site.”

The Co-Lead Agencies must reject the PolyMet SDEIS. It is do-over time. For starters, make the company tell us how much pollution would occur and how nasty the results would be if the seepage collection was 50 percent effective or maybe, on a good day, 75 percent effective.

Have the courage and integrity to use field experience and science instead of wishful thinking and misdirection.