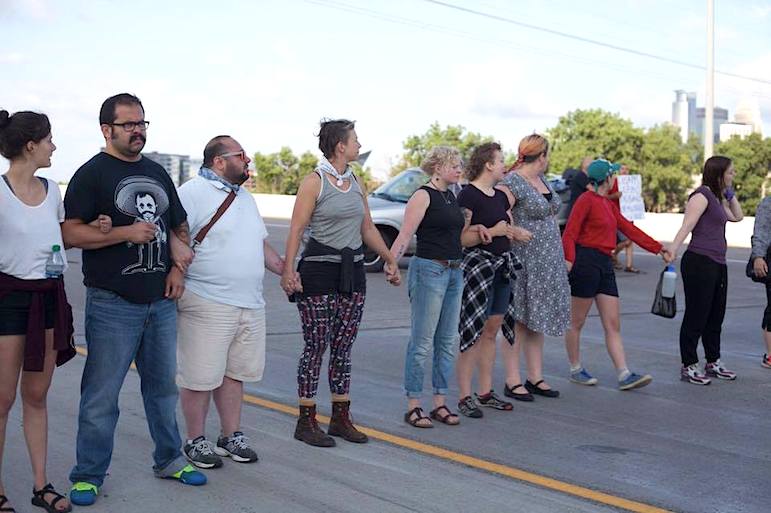 Protesters block northbound lanes of Interstate 35W during the morning rush-hour of July 13, 2016 to protest the death of Philando Castile. Photo courtesy of Filiberto Nolasco Gomez.

I am angry almost every day.

I am angry about many things. The anger that has most shaped my feelings and perspective is derived from the painful reality that the state killed my mother. She wasn’t shot or beaten. The source of her mistreatment was the day-to-day violence of indifference with which the state treated her and mothers and grandmothers like her. The state killed my mother by not taking seriously the life of an undocumented, or perceived to be undocumented, poor, uninsured Latina woman. She died from breast cancer holding my brother’s hand in our home.

I am angry. I’ve had a steady presence of fury since I was a young man. My formative years were spent looking for and discovering constructive outlets for these feelings.

As a teenager my anger pivoted around the increasing awareness of how limited the opportunities were for my immediate community: hearing brilliant talented friends talk about the school counselor trying to convince them that they would never go to college. Noticing when I would go to conferences outside of my city how much more resources other schools had. Realizing how much of a tragedy it was that of the approximately 1,000 high school freshman I started with it would eventually whittle down to 500. Of those 500, maybe 40 would go to a four-year university and I being one of maybe five that choose to go to a well known private school. While I spent hours learning how to manage my fury I couldn’t ignore what I could see and the despair and pain I felt on a regular basis. I do think this journey led me into activism and wanting to confront who appears to be an oppressive force.

During my college experience I was confronted for the first time with very wealthy white people that were directed by a “liberal” concern with the world that seemed mostly theoretical. There were few I could identify with, that come out of the same struggle and frustration that I had. Simultaneously, I had some amazing professors that brought me into a deep relationship with the Americas and in particular Southern Mexico and Central America. I thereafter travelled to Guatemala and was confronted with the consequences of state violence as the community I had been accompanying was massacred by the state. The massacre at Nueva Linda would be a destabilizing force in my life, but also motivated the formation of a series of questions that I desperately needed to answer: what’s the role of the state, how to console and be present for a community, what advocacy means to me and what sort of relationship to it I want to have. Ultimately I regularly consider what are the possibilities and options for confronting state power. The pursuit of an answer to these questions continues to shape and form me.

Although I am angry almost every day, sometimes a little extra comes out.

The day after yet another Black person, St. Paul’s own Philando Castile, was assassinated by a police officer I wrote the following:

To my POC family: as always, I feel you and will stand with you.
It takes a while for me to come to terms with my feelings on days like this. Today I am disgusted with white outrage, I am tired of it. Why does it take a Black body to be treated as disposable for y’all to show some outrage? What about the day to day transgressions we POC folks face and survive? Where is your outrage and support then? What about the moment when another person of color gets executed by the state or a trans person of color loses their life to hate? We have survived the colonial enterprise that continues to benefit you but are barely working through it’s malignancy on the daily.

In the past I have heard white folk express outrage over how our collective POC needs to not disrupt the status quo, that it’s better to FOLLOW THE LAW. It’s clear to us that these laws are precisely designed to give a rationale to the disposal of our voice and bodies and it is our imperative to fight these laws. These laws are the daily agents of white supremacy, and therefore benefit your privilege and capital more than they defend our right to live and breathe.

I would ask that y’all examine your complicity to all of this and your relationship to white supremacy.

On the evening of July 10, activists and allies with Black Lives Matter shut down Interstate 94 in St. Paul. I was in Chicago covering Ruido Fest. As reports from friends were coming from the Twin Cities it seemed like my entire community was out on the freeway being assaulted by the state. I was pained to not be with them and concerned but lifted that clearly the response to repressive state violence has escalated. From afar I wondered aloud whether we are closer to a tipping point, building towards momentum to allow our energy and efforts to become something more than we could have ever imagined.

I continue to be angry. That anger led to my arrest along with 41 others onto Interstate 35W approaching downtown Minneapolis on July 13, and my sentencing on Oct. 6. For me, the action was about elevating a conversation around race, racism, state violence and the apparent disposability of black bodies. The presence of queer and transgender activists also particularly moved me. The elevation of the conversation was intended to be accomplished by disrupting the morning commute. It was an attempt to bring some tension into people’s lives, a taste of the tension people of color feel on a daily basis as we navigate a hostile world. It was an attempt to heighten the agitation that has been happening all over the city since the murder of Jamar Clark. We continue to protest and shut down streets and escalate tactics because black bodies are not disposable to us.

The day after the killing of Philando Castile the owner of the Solcana Crossfit and my friend, Hannah Wydeven, checked in with me after class. I went to go work out to try to relieve my tensions, confusion and grief. My feelings were easy to read, I suppose, as I walked into the room. She asked about what she could do, where to give money. I let her know that our community is in a lot of pain right now and asking folks about a fundraiser wasn’t something I was willing to do. We kept talking. I didn’t think I wanted to talk as she continued to nudge me into a conversation about what to do. Then it occurred to me we could do the same thing we did at work. We had brought in a trainer to talk about anti-oppression through the lens of white supremacy. I mentioned to Hannah that maybe we could do that at the gym for coaches, provide an opportunity for folks to examine their relationship to white supremacy.

Another friend would later clumsily ask me what to do. She was in a bit of a panic and I was irritated because I felt like I was being objectified and extracted since she wasn’t asking me how I felt, in contrast to Hannah. I told her that she should examine her relationship to white supremacy, she said she would call her legislative officials. What I am describing is a contrast in approaches; one, a willingness to hold tension and another white panic and tears that is more narcissism than solidarity. As for me I continue to examine my own relationship to white supremacy as I reflect over what I have internalized.