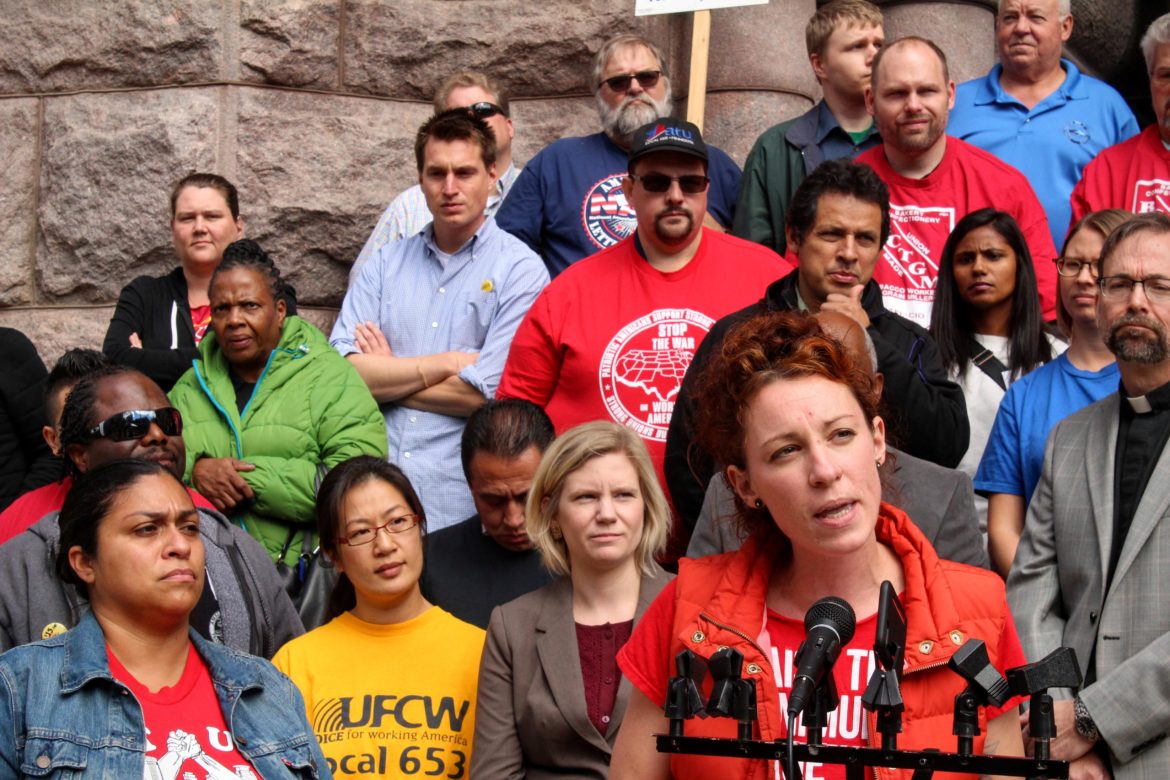 Ginger Jentzen, former executive director of 15 Now Minnesota, speaks at a Sept. 29 press conference at City Hall introducing a growing coalition of the Fight for $15 movement. Photo by Cristeta Boarini.

Spoiler alert: I’m a former tipped worker with deep respect for the service industry and a leader in the fight for $15. But even I was taken aback by the Minnesota Restaurant Association (MRA) sponsored “Pathway to $15” campaign, dedicated to exclude tipped workers from a $15 per hour minimum wage. To be clear, the MRA is no friend to workers. They opposed paid sick time ordinances in Minneapolis and St. Paul, opposed the statewide minimum wage of $9.50 and are actively campaigning for “pre-emption” at the state level.

Don’t be fooled by the grassroots feel of “Pathway to $15.” In a recent article, Dan Mcelroy, President and CEO of the MRA said, “We are building a Pathway to $15 coalition and have engaged the Lockridge Grindal Nauen firm to help us with lobbying, grassroots engagement, public relations and other aspects of a bold and comprehensive campaign.” If that law firm sounds familiar, it should. It’s the same firm City Hall hired to block $15 from voters last year in a lawsuit backed by the Chamber of Commerce.

The Pathway to $15 bases itself on scare tactics designed to leverage the genuine concerns of restaurant workers into opposition against $15 by claiming raising wages erodes tipping. There is no mention of Minneapolis’ minimum wage study, which showed that $15 per hour for every worker, phased-in by 2022, would cause minimal increases to business and costs that would be distributed over the entire local economy. There’s no mention that a tip-penalty is currently illegal in Minnesota, and if passed in Minneapolis, it would open the space to a statewide tip penalty, something the MRA has been lobbying for years.

Tip penalty increases the risk of workplace harassment by forcing tipped workers to rely on the goodwill of customers to earn a living wage. In states with a tip penalty, women restaurant workers are twice as likely to tolerate sexual harassment on the job as women in states without a tip penalty, like Minnesota. Some Minneapolis restaurants have even been caught playing up this dynamic, encouraging “dress codes” like above the knee pleated skirts with tall socks, etc.

There is discrimination based on race, body type, gender identity, etc., in restaurants, often highlighted between the front and back of house. But the mistake some restaurant owners make is focusing on the process of tipping, rather than overturning the oppressive social norms that cause this discrimination. The owners call for schemes that penalize tipped workers as a form of social justice, but let’s be honest – if restaurant owners wanted to genuinely confront workplace discrimination, they could welcome unionization drives, which allow workers to address these issues without retaliation from management.

The MRA’s proposal for tip-penalty is almost impossible to enforce. They propose that a portion of a worker’s’ tips count towards wages until they hit $15 per hour. But this would change hour by hour and would require a complicated system of tracking. At best, it puts workers in the precarious situation of negotiating their compensation with management on a daily basis, requiring all restaurants to have a robust human resources department that adds cost. And at worst opens the door to intimidation and wage theft.

The MRA might claim that higher minimum wage lowers tips, but there’s no evidence of that actually happening. Think about it. Do you tip half as much in Minnesota as you do in Wisconsin, a state with a tip penalty? Probably not. In fact, the average tipping rates between Minnesota and Wisconsin are about the same.

Also we should be clear that for every tipped worker at a sleek downtown establishment, there is a valet parking driver standing outside, a barista at Starbucks, a server working overnight at Perkins or Denny’s and a delivery driver working for Davanni’s. These workers have everything to lose from a tip penalty.

Some downtown restaurant owners are threatening to move away from Minneapolis. That would be a bigger disaster for their business than paying $15, unless people leave the Vikings game and drive to Richfield to get a meal. More likely, another restaurant moves into the vacant location to grab their share of the market. For example, in Seattle, more restaurants are still opening while the minimum wage increases to $15.

I know the challenges of the restaurant industry. Many servers base their livelihood on tips, whether going toward rent or a mortgage, car payment, childcare costs, student debt. I recognize that many restaurants feel squeezed. But I don’t accept the Minnesota Restaurant Association’s solution to penalize servers. So the next time your boss blames $15, remember: tip-penalty helps restaurant owners, $15 per hour plus tips helps all workers, including servers.