Crowds gathered early on the hot and steamy night of June 22, snatching up the small spaces of shade along Central Avenue in Minneapolis. Everybody loves a parade, and they were determined to see the 81st annual Celebrate Northeast Parade.

Well before the start of the parade, street vendors marched up and down each side of the street, wiping their wet faces and blowing up Dora the Explorer, Spiderman and SpongeBob SquarePants balloons to sell.

The parade began promptly at 6:30 and for the next 2 ½ hours more than 100 entries, including clubs, organizations, politicians, schools and parks, marched their way down Central between 27th and 14th Streets. Many people who attended enjoyed watching everything from the Edison High School Alumni Band to the Zuhrah Shrine Cobra Corps, who performed antics in their assorted vehicles. Anything that can be described as a novelty or unique was a hit. 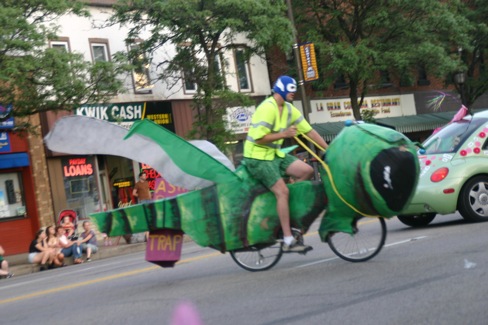 “I love your crown,” a young girl yelled from the sidewalk to one of the Senior Princesses riding on a float.

It wasn’t difficult for the spectators to recognize at least one familiar face during the event either walking on the street or marching in the parade. A man walking on tall stilts even bent down to say hello to me, introducing himself as my son’s old preschool teacher, whom I haven’t seen in 20 years.

The Northeast parade is the second oldest in the state, after Delano’s July 4 parade, which comes after a four day festival.  The Celebrate Northeast Parade started in 1929, consisting of a group of cars that drove down Central Avenue. At one point, there was also a kiddie parade, music in the parks and a soap box derby.

Although the parade is not the largest, it still has a good number of entries every year. According to Christine Levens from the Northeast Chamber of Commerce, the number of participants varies each year depending on the amount of spacing available in their staging area at Shoreham Yards. In the past seven years, the number of entrants have ranged between 100-150. 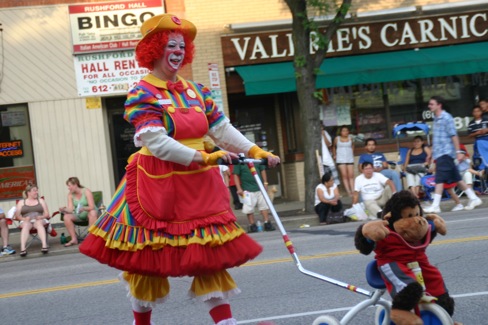 Levens said that the parade is made up of several different components. Generally they have 5 marching bands that compete for prizes, an additional five to six bands/drumlines, and between 12-18 visiting royalty floats from other communities. The parade also features past and present Northeast royalty, as well as candidates and youth. This year a dozen elected officials and/or candidates for office, ranging from Congressman Keith Ellison, to candidates for governor made an appearance.  County and city officials, as well as a number of Minneapolis School Board candidates, were also on hand.  The remainder of the entrants are non-profit groups, local businesses and paid entertainment. “This year we had six Northeast schools participate in the parade and were together in the line up. Smiling and waving kids are just great. It brings back memories for people and I think that is a big part of a parade –community pride and nostalgia,” Levens said. “We had a very focused volunteer recruitment campaign,” Levens said. ” It takes about 130 people to make the parade a success. Our challenge this year was to try to include everyone who wanted to participate. We increased the number of participants by 25 from 2009. It requires a larger budget and greater coordination. I think the result was a much more entertaining parade that represented all kinds of elements of our community.  After all that is what we’re doing-the Celebrate Northeast Parade”

“The line up is a very difficult thing to negotiate and navigate. There are a lot of special requests, order of appearance, mix of music, vehicles, animals and walking groups. Most can’t be by one another so there is about a week worth of moving entrants around before the firstfinal line up is done.  We usually end up with three finals before parade day.  I also find that someone always wants to enter one day before the event. Entrant deadlines are in the second week of May,” she added. 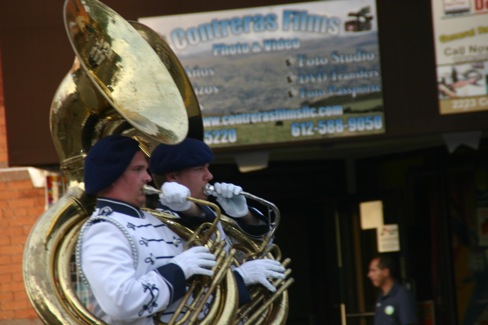 The Northeast Chamber of Commerce is the primary organizing body for the parade and works on the event nine months out of the year.    “It’s a fantastic endeavor that takes a lot of planning and thought and we think the results speak for themselves–a fantastic night in Northeast Minneapolis,” Levens said.

Art Share, one of this year’s participants, is a diverse group of artists who conceptualize and facilitate art projects created by community, for the community. They took the concept of parade to a new and more personal level. The project was conceived two years ago by one of the three co-founders of Art Share, Sara Hanson.

According to another co-founder, Jennifer Arave, Hanson felt the parade was missing an individual creative expression and inclusiveness. She wanted the experience of being in a parade to be available for all northeasters, not just those who were involved in an organization.

“Anyone can be in the parade!” Arave said. “It’s important to us that people in a neighborhood feel they have a right to a community, especially the new community members, the renters and short-term residents.” 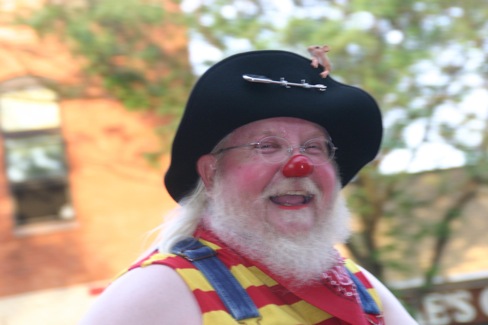 This year’s project grew and they doubled their participants to about 47. The “wearable float,” (a creative expression on a box with suspenders worn around the waist) was present again this year but many also stenciled t-shirts stating “I am NE.”

“The shirt really caught on. We invited people to make their own version of the shirt. We need to remember that communities are made up of the individuals with in it, but the strength comes from these individuals identifying as part of a connected community,” Arave said.

Sara Hanson said that participants were involved for various reasons.

“One participant, Joyce, has been watching the parade for years and has always wanted to be in it. This year she made herself an angel with a beautiful dress and wings not knowing how much of the parade she could actually physically walk.  We helped her make a heaven cart float with a chair for her to sit on and be in the entire parade.”

Next year the group plans on partnering with other arts organizations and community groups to reach a larger group of northeasters.

“Prior to this project no one of us in Art Share had been in a parade, or really had a desire to be in the parade.  We were driven by other reasons.  We had an amazing time with the creative process and the parade event this year.  It is gratifying to unite people through the creative process and then share our expressions and experiences together with smiles and waves to our neighbors!” Hanson said.