Robbinsdale school board members got an earful from community residents, teachers and the district’s school bus drivers recently, all urging the board to reject a proposed plan to outsource the drivers’ jobs to a private contractor. A vote is scheduled Monday. Speaker after speaker at the Feb. 21 meeting urged the ISD 281 board to see the value to the district in keeping its current staff of bus drivers, many of whom are long-time district employees and community residents. Speaker after speaker expressed fears for student safety if transportation is handed over to a private contractor whose drivers won’t know the community and whose bus fleet won’t be maintained as well as the district’s own fleet.

“Privatizing is bad for students, parents, taxpayers,” said Tillie, a Robbinsdale parent and grandmother. “Some students have grown up knowing bus drivers year after year from kindergarten to when they graduated,” she said.

The school administration’s push to outsource the school bus drivers’ jobs is happening at the same time that the district is in negotiations for a new contract with the drivers’ union, SEIU Local 284.

“If our drivers are willing to take cuts and other sacrifices, we should be willing to work with them first,” Tillie said.

Indeed, the union has offered contract concessions and identified cost-saving moves the district could take.

Still, the school board is scheduled to vote on the outsourcing proposal at its Monday, March 5 meeting, considering a bid from First Student, a nationwide school bus company.

That didn’t sit well with Dorothea Moga, one of about 75 people who attended the Feb. 21 “listening session” before the school board meeting that night.

“I have a good neighbor who is a bus driver and has done good things for people in the neighborhood,” Moga said. She noted that First Student operates in 42 states. “That’s not local,” she said. “I support staying local and taking care of all of my grandchildren.” 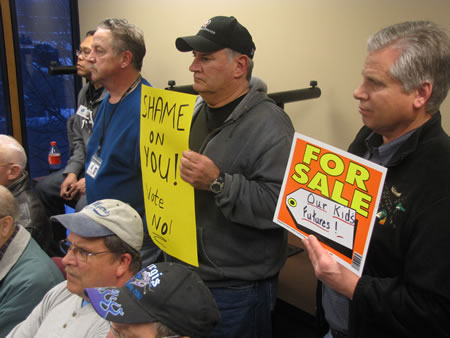 “I want our community to support people in our community,” said Jodi, whose kindergarten student rides the school bus. She said she trusts the current drivers with her child’s safety. “Keep me in the community by keeping the bus drivers,” she said. “Listen to parents.”

“Our kids have come to know and trust these people,” said Jim Brinkman, reading a letter from school parent Sue Tensing. “Please don’t take that trust away from us.”

Brenda, a special education teacher for Robbinsdale, reminded the board that her students’ day “starts with the bus. The bus driver can make a big difference with what I get.”

In her experience, she said, the buses currently operated by private contractors are regularly late and students tell her stories of those private contractor’s drivers stopping to smoke or talk on cell phones.

“I don’t think we’re bringing my students on a safe bus ride if we contract for bus services,” she said.

Several of the bus drivers who spoke out also live in the district — and send their own kids to school on Robbinsdale school district buses.

“I’m a parent and a driver,” said Joseph Coughlan. “Our kids are at the mercy of the lowest bidder.”

By contrast, reported Brad Peske, a Robbinsdale school bus mechanic since 1995, he has had several of those drivers come up and say, “you guys do such a fabulous job of maintaining the equipment.” If a repair is needed, Peske noted, “we get on it right away.”

If the district contracts out for its school bus operations, school district dollars will become a source of profit for a private bus company, instead of going towards union wage jobs and benefits.

“This is my sixth year here,” said Robbinsdale school district driver Len Lewis. Previously, he said, “I drove 10 years for three different contractors.” The private contractors, he noted, don’t offer pensions or benefits. “Let me guarantee you, these contracted jobs are something people move on from as soon as they can.”

“I’ve driven for private contractors,” said William Smith, a first-year driver for the Robbinsdale district. “Experienced bus drivers would not willingly drive for First Student… because of their reputation and the way the treat their drivers.”

“Outsourcing is not what this district wants,” Smith said.

Not a single speaker at the Feb. 21 “listening session” spoke in favor of outsourcing the district’s school bus operations.

The district’s website includes a “unofficial school board meeting summary” of the Feb. 21 meeting which includes not one word reflecting the nearly 90 minutes of public comments opposing outsourcing during the listening session.

The district’s website, which includes video of school board meetings, includes no video of the Feb. 21 “listening session.”

The Robbinsdale school board will meet Monday, March 5 at 5:30 p.m. to vote on the school bus outsourcing proposal.