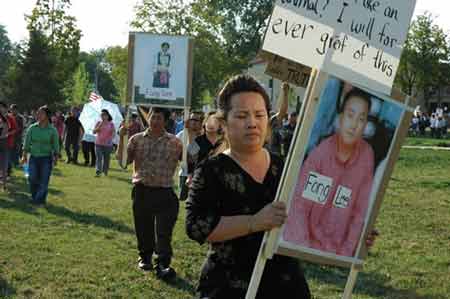 “We are not here to make accusations,” Michael Yang declared on behalf of the 500-plus community members who attended a vigil Monday for Fong Lee, the 19-year-old boy who was gunned down by a Minneapolis police officer. “We are here only to seek justice.”

However, after comparing the evidence that police had offered with the conflicting eye-witness accounts from nearby neighbors, Yang concisely stated, “We now have more questions than answers.”

Police say that on the evening of Saturday, July 22, Minneapolis police officer Jason Andersen and his partner on this particular occasion, state trooper Craig Benz observed what appeared to be a drug transaction among a group of people on the school grounds of Cityview Elementary in north Minneapolis. Still in their squad car, Andersen and Benz approached the group who then dispersed.

What the police neglect to reveal, say eye-witnesses including 17-year-old Pang Vang who observed the incident from her back-yard, is that the squad car sped across the grassy field and rammed their car into a fleeing bicycle, knocking down the rider who apparently turned out to be Fong Lee.

“It was like they were trying to kill him while he was on his bike,” Vang proclaimed.

According to police statements, a foot-chase ensued upon which time Fong brandished a gun, prompting officer Andersen to shoot Fong. In Andersen’s defense, a handgun was eventually found a few feet from Fong’s body. According to interim Minneapolis Police Chief Tim Dolan, however, the gun had not been fired nor were any of Fong’s fingerprints found on that gun.

After he had invited himself to speak at the family’s press conference at City Hall, chief Dolan did show edited footage from the school’s three surveillance cameras to family members and a few selected community leaders.

According to those who saw that video, parts of the foot-chase are caught on tape but the camera pans away at the moment when officer Andersen shoots Fong. The camera pans back only to see Fong lying on the ground as Andersen and trooper Benz approach him from about 20 feet away.

“Because of the camera angles and because the incident was so brief, it is very hard to tell if Fong was carrying a gun,” Says Lee Pao Xiong from the Hmong Advocacy Coalition after watching the video. “It would have been much more genuine if we could have been allowed to see each of the three videos in its entirety, rather than what could only have been an edited version that the police wanted us to see.”

Revealing that the chief had specifically refused to allow the Lee family attorneys to also watch the video, Xiong goes on to question why chief Dolan was quick to divulge the content of the video to the Minneapolis Star Tribune immediately after he had strictly banned anybody else who saw the video to talk to the media.

“It makes me question the sincerity of the police.”

Questioning the police seems to be the ongoing theme for family members of Fong Lee.

They question why it took more than 12 hours for the police to notify the family of Fong’s death?

They question why the police refused to allow the family to identify Fong’s body until nearly a week had passed by?

They question why officer Andersen was put back to work after only three days of paid administrative leave, a bare minimum amount of time considering the scope and severity of the actions taken by Andersen?

They question why it took eight frontal shots (including one shot in the buttocks, apparently from behind) to take Fong down?

And above all, they question the contention made by police that Fong was carrying a gun that evening in view of the fact that no other witness, including the video cameras, saw a gun being possessed by Fong (and if so, why were there no shots fired from that gun and why were there no fingerprints found if Fong had supposedly pointed the gun at Andersen)?

“He was riding his bike that evening,” Fong’s father, Nou Kai Lee, clarified. “Where would he put a gun if he was riding a bike for more than 20 blocks?”

These are the kinds of questions that the police will never answer truthfully, says Zachary Metoyer from the Communities United Against Police Brutality, a community watch group dedicated to ending unwarranted police violence.

“Stay united and stay strong,” Metoyer offered. “The police will try to throw smokescreens to hide the fact that they are guilty of executing this boy, but if you stay united, you’ll get past the smokescreens and the deception.”

As the chair of the City Council’s Public Safety and Regulatory Services Committee, Samuels tried to allay the crowd by offering that with patience and trust, “the police are doing their work and that the investigation will bear out the truth.”

While it remains uncertain at this time whether the Attorney General has reviewed this case or whether a full internal affairs investigation is underway, it is confirmed by investigations officer Meilin Obinata from the City of Minneapolis Department of Civil Rights that their independent investigation into whether discrimination was a factor in Fong Lee’s death.

“If the police broke any of Fong Lee’s civil rights, it may prove to be a pretty big deal,” Obinata explained. “We take discrimination by a public employee very seriously.”

Though a courthouse may never pass judgment on this case, the court of public opinion has not only dug the grave deeper for Fong Lee, but has also found a shallow grave for the Hmong community as well.

Shortly following the shooting, the highly popular KQRS morning personality Tom Bernard has been quoted as saying, among other provocative statements that, “The Hmong community should apologize to the Minneapolis police department for demanding justice for a punk-thug like gang-member Fong Lee.”

Despite having only a misdemeanor “trespassing” charge on his record for what has been explained as his entering an abandoned home to collect pigeons, Fong Lee’s supposed involvement in a gang has been much overplayed in the mainstream media and by the police.

Rather than describing the uplifting show of support for the young man, WCCO News reporter Sue Turner took the angle that as a gang member, Fong Lee had put himself at risk, describing Hmong gangs as a “real threat”.

Pointing multiple times to Fong’s involvement in a gang, chief Dolan was not hesitant to weigh Fong’s past fling with the law as justification to believe wholeheartedly in officer Andersen’s account of what happened on that fateful evening.

Explaining why the chief allowed officer Andersen to go back to work after being put on administrative leave for only three days, chief Dolan clearly stated that “At this time looking at what we have, I feel I have adequate reason not to extend that leave.”

It was surfaced later, however, that officer Andersen himself has a blemish on his record. The Star Tribune reported that while in the police academy, Andersen was questioned about making a “derogatory racial term” while off duty. Claiming Andersen was a “stellar performer” in the academy otherwise, his superiors didn’t find the incident to be a cause for concern as an officer.

Whether or not the Lee family will ever find the truth in this case, the saddest thing about this entire ordeal is that they have lost a son and a brother. The Hmong community may have proven that they can rally behind their fallen, but in seeking the truth, for now, only officer Jason Andersen knows why he shot this young man dead in his tracks.