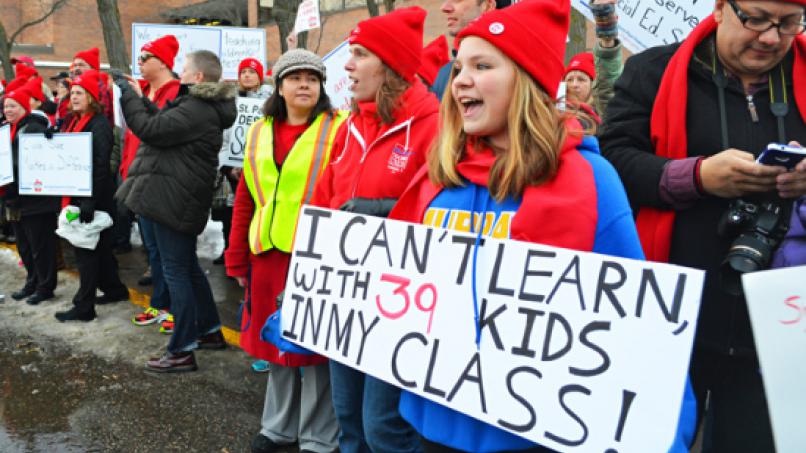 Wearing red scarves, hats and shirts to show their solidarity with union teachers, families packed the parking lot outside St. Paul Public Schools headquarters Tuesday during a rally in support of smaller class sizes, expanded pre-kindergarten and other community-driven priorities teachers have brought to the table in contract negotiations with the district.

“Parents are standing with you because you actually want to know what we want for our kids,” parent Leon Sanders told teachers at the rally. “And when we told you, you stood up for us.”

The St. Paul Federation of Teachers organized the rally, which drew about 200 people, in advance of two critical events in negotiations: a return to the bargaining table tomorrow and a strike-authorization vote Feb. 24.

“We need to make sure our Board of Education hears they need to get serious about making progress with us on the schools St. Paul children deserve,” SPFT President Mary Cathryn Ricker said. “We want progress.”

Board of Education members received that message during a public hearing that opened their meeting later in the evening. A string of parents, teachers and students lined up to show their support for the teachers’ contract campaign.

Mariah Duncan, a senior at Central High School, told board members she’s had to sit on the floor of some classrooms stuffed beyond capacity. Jennifer Ewald, whose son has a severe peanut allergy and asthma, told board members she supports teachers’ efforts to staff more of the district’s schools with nurses.

Smaller class sizes and increased professional staffing are among the principles, culled from months of listening sessions with parents, students and other community stakeholders, that are guiding the teachers’ contract campaign. Others include a decreased reliance on standardized testing and expansion of the district’s pre-kindergarten offerings.

“I cannot stress enough that pre-K helped us put the pieces in place for our child to be successful,” Zuki Ellis told board members during the public hearing.

A parent of three, Ellis also supports teachers’ efforts to reduce class sizes. Her oldest son has “close to 40 students” in some high school classes, she said.

“Is that safe for 40 high school students to be in a science lab?” Ellis asked. “Our babies deserve better – my babies, your babies, our babies.

“Thank you, teachers, for standing up for these issues.”

After the public hearing, board members tabled a resolution on the district’s response to a potential strike. But last week Superintendent Valeria Silva and Board Chair Mary Doran mailed letters to parents warning of school closures, schedule changes and other potential impacts of a teacher strike.

For Phillip Cryan, parent of a third-grader at J.J. Hill Montessori, the intent of that letter was clear.

“I was supposed to feel afraid,” Cryan said. “Other people got that message too? Well, I don’t feel afraid today.”

If it takes a strike to make progress on the schools St. Paul students deserve, Cryan added, then teachers will have his support – and support from parents across the district like him.

“We are with you in this fight because we see the love you show to our kids every day,” he said. “That’s why so many of us choose to live here and pay taxes here. We are going to be with you whatever it takes and for as long as it takes.”