Jason Tanzman works on a bike. (Photos by Jerry Clark)

Are you asking yourself what the heck is a bike library? A place to check out books while riding your bike? A library filled with books about bikes? Actually, it is neither.

The Bike Library will not house books, but rather bikes! It will be a place where working-class folks in need of transportation can go and check out a bike much like checking out a book from a typical library. [Video below]

So it essentially works like this: a person goes in, checks out a bike for six months.  They are given not only instruction about safe riding, but also classes about how to properly maintain the bike.

At the end of six months they have the option to buy the bike or they can get the bike for free through the Sibley Bike Depot’s (SBD) Earn-A-Bike program, where in exchange for volunteer time, the bike will be earned by the volunteer 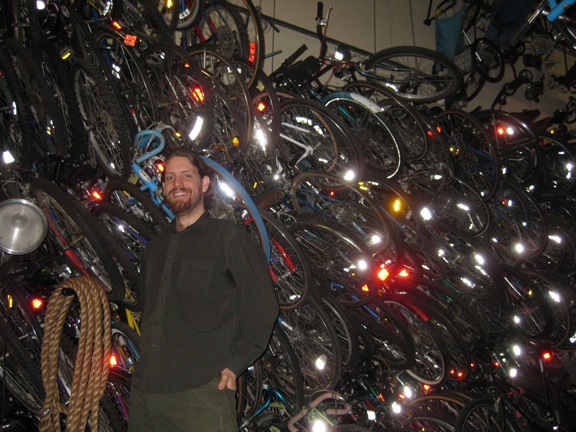 “The bike library was conceptualized last March or April. We were trying to figure out how to get some funds to fix up all these excess bikes we have and get them into the hands of people who most lack transportation resources.” Said Interim Library Coordinator Jason Tanzman.

Funding eventually came from a grant from MnDOT. This funding will be used not only to fix up the bikes, but also to hire someone full-time to run the bike library.

“One of the goals for the Bike Library is, we want to make sure we’re using good quality bikes,” said Tanzman. “Part of the whole point of the bike library is to show people who may have been relying on department store bikes, bikes that are pretty much designed to break down, that a bike can be a reliable transportation tool.”

The Sibley Bike Depot was founded in 2001 by the Minnesota Bicycle and Pedestrian Association (MNBPA).  They originally were located in downtown St. Paul and moved to the Thomas-Dale neighborhood in 2007

“The move really helped us re-organize the space and really start to think of ourselves as a community bike shop, to make an open space for people to work on their bikes and take classes.” Said Tanzman. “We also want to be close to the people who can most benefit from our programs”

In addition to being involved in the community, the depot strives to be a bicycle and environmental advocacy group as well.

“We want to take bikes that are in the waste stream, bikes that are landfill-bound and prevent them from getting to the landfill…we try to take them, fix them up and get them into the hands of people who are going to use them,” said Tanzman.

Bike donations are accepted anytime the shop is open (hours are listed at www.sibleybikedepot.org) or by appointment.   Bikes also have been donated through neighborhood cleanup events and bike drives.

If you are interested in becoming involved with the Sibley Bike Depot or would like more information about the Community Partners Bike Library, you can send an email to the volunteer coordinator: jason@sibleybikedepot.org or go to the website.