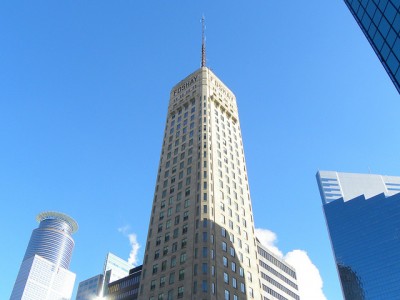 The past and the future in a stone skyscraper. By Flickr user Fibonacci Blue.﻿

“Sustainability” is a buzzword, and it’s in vogue because our society is realizing the immensity of its waste. We’ve begun to realize how detrimental constant shifts in materials and trends, whether these be types of plastic or the buildings where we work. We long to become sustainable, so that we no longer have to witness the waste of continual building, but true “sustainability” requires a major shift in thought, and with every change we work for comes the inevitability of waste.

Locating fortresses—the places least susceptible to collapse, the organizations that aren’t outgrowing or folding—can be difficult if stability is not what we’re told to look for. Many of us seek change, growth, and transformation, which is all well and good. To reinvent a system within, we build our own shaky shacks that we want to move out of, structures and organizations that we want to keep building, and everyone pats us on the back because the key to capitalism is growth and change, and our tiny steps forward fit right into that process. But we sometimes forget that our new developments and partnerships and ideas are tenuous, and their fragility leaves all that progress vulnerable.

Sheila Regan reports in July 23’s Twin Cities Daily Planet on the future of the Peace House mural at Franklin and 5th Avenues, which was completed (and won City Pages’ Best Public Art Project)  in 2005. As the Peace House organization grows and expands beyond its current walls, and the Hope Community and AEON look to revitalize and create a sustainable and healthy South Quarter, it’s possible that the mural will be a casualty of change-making.

As we all know, the development of our bastion of sustainability (the light rail will save us all, it seems) along the Central Corridor affects absolutely everything in its wake, right down to the bus stops. According to the Monitor, University Avenue bus stops are switching and shelters are being removed to allow for the changes there, and while Metro Transit’s information continues to be available online, getting the message out has posed problems for the Corridor Management Committee, reports Jane McClure. But we’re reminded that when construction is completed, it’s a joyous occasion, according to Hill and Lake Press, which celebrated the completion of the Cedar Lake Regional Trail. It’s not the best analogy—the Cedar Lake Trail is out of the way, no major businesses were displaced or folded during the construction of the Cedar Lake Trail, and externalities were few overall—but when some new method of transportation comes to fruition, we find a reason to rejoice. We’ve made a new landmark, a new promise to uphold our title of Best Bicycling City in America.

But as we all know, even landmarks change over time. Our literal local fortress—Fort Snelling—is slated for some redevelopment, although the fortress will remain untouched, according to the June 8 Villager. Plans to renovate the Upper Post and West District, however, are in the works, and have to undergo review from a number of state and federal agencies before redevelopment can begin. Renovating these areas will “encourage a mix of uses, including cultural, educational, hospitality, residential, recreational, entertainment, service and retail uses,” writes reporter Kevin Driscoll. Although the article doesn’t mention the word “sustainability,” the new Fort Snelling redevelopments will be “a framework for revitalization, reuse, and investment.”

Maybe one day the Ford Plant in Highland Park will retain the same historical reverence we save for institutions like Fort Snelling. Jane McClure writes in the Longfellow/Nokomis Messenger, “City officials even hope the redevelopment, if done in a way that protects the environment, could be a national model.” No decisions have made, but McClure mentions “a public-private partnership” is seen as the ideal redevelopment, and two studies focused on environmental sustainability have been released (read the pdf of these studies). The Ford plant isn’t closed yet; that will happen in December of this year, based on the number of Ford Rangers that were ordered for 2012—how’s that for sustainability?

Back when multicolored skyscrapers seemed like the way to make it last, we built Riverside Plaza. Now, only 40 years after its construction, it’s undergoing renovations. While the Minneapolis Labor Review points out that its redevelopment provides jobs for “about 600 different trades union workers,” the Minnesota Spokesman Recorder highlights the inconvenience and disruption to residents. Communication between redevelopment crews and Riverside Plaza’s community leaders has been inadequate, write Issa A. Mansaray, although residents generally agree that the improvements are much needed. (Check out the TC Daily Planet’s series on Riverside Plaza from 2010 to learn more about that community and redevelopments.) And there are other local institutions that are getting a new chance at life: North High School is reopening in the fall, allowing for the continuing education of the students in that neighborhood. And in St. Paul, the ever-battling Planned Parenthood is getting a new Twin Cities headquarters (make way for the abortionplex! kidding, we hope they have enough funding to finish the project).

Instead of constructing new landmarks, the idea of renaming old ones to mean new things seems to be picking up steam. The collonade in Lowry Hill East’s Mueller Park may be renamed “the Allan Spear-LGBT equality collonade,” after a state senator who worked for the inclusion of LGBT rights in Minnesota’s Human Rights Act (link to pdf of the LHENA Wedge). And although we can’t also change the name of one of Minneapolis’s more controversially named lakes—Senator Calhoun really wasn’t a model senator, friends—we can still keep working to continue building a sustainable legacy in the areas that mean the most to us. The Lake Street Council’s Museum of the Streets is collecting information about notable Lake Street historic sites, says the Longfellow/Nokomis Messenger, and St. Paul’s Community Reporter notes that a Historic Resources Survey is gathering information about the neighborhood resources of that city’s Uppertown—along a portion of West Seventh Street in St. Paul.

And we have to remember that unless we’re in the Foshay tower, everything is subject to the will of the outside world, and even the houses we thought were stable in the neighborhoods that were historic are still subject to the forces of nature. Portions of North Minneapolis were seriously damaged by the May 21 tornado, and despite the incredible outpouring of help from within and outside the neighborhood, there is still plenty of work to be done in the neighborhood. Insight News has compiled a page of disaster relief resources and thanked leaders in the Northside community who helped organize relief efforts and communicate with politicians. The Minnesota Spokesman-Recorder highlights the organizations that worked together for tornado relief, community togetherness immediately after the tornado, and overviews media coverage of the post-tornado Northside.

And so we don’t forget that North Minneapolis is part of a long history of shifts and change, the American Jewish World delves into the Northside’s past, celebrating a collection of Northside artists at Homewood Studios. Because we can’t all build Foshay towers, but we can remember where we were when others were building their stone landmarks.

Deborah Carver is the editor and publisher of Twin Cities Runoff.