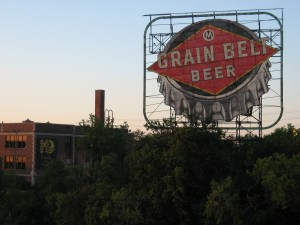 The unlit Grain Belt sign: A symbol of urban entropy.

Everything is decaying. Nothing is sacred. Now that the heat waves are over, we’re starting to notice the things that are falling behind on our watch. The systems we work to build fall apart if we don’t watch over them.

The lack of Local Government Aid in Lauderdale—that tiny little city wedged between Minneapolis and St. Paul that you might drive through on your way to Falcon Heights for the fair this month—is causing huge problems for the city. Kristal Leebrick at the Park Bugle writes of children attempting to make up for the budget gap with their piggy banks, and the city’s more adult option to raise revenue: opening a municipal liquor store. Leebrick writes, “In 2012, even if the city eliminated all non-mandated services, such as city events, staffing at the ice rink warming house, park and recreation programming, the city newsletter and one of its five city staff members, a significant budget gap would remain.” Without LGA, Lauderdale might be forced to consolidate with another city. State Rep. Mindy Greiling (DFL) notes, “They only have one police officer. They really have nothing left to cut.”

Budget cuts might also eliminate the Par 3 golf course at Wirth Park, according to the Minnesota Spokesman-Recorder. The Minneapolis Parks and Recreation Board and a Citizens’ Action Committee has been considering repurposing Wirth Park with the Nordic Ski Foundation; a July 19 meeting brought over 100 North Minneapolis citizens out to protest the proposed changes, accompanied by a petition with 800 local signatures. Vickie Evans-Nash’s article quotes St. Paul citizen Gayle Anderson, who gives a background of the Par 3 Course: “‘The Par 3 is pretty much historic in nature,’ Anderson said. ‘A lot of Minneapolis youngsters started out their golf careers on that Par 3. It’s always been accommodating to young Black men and women that are starting out playing golf.’” The article outlines the committees in control of Par 3, as well as the planning process that will oversee Wirth Park’s future.

The unofficial reappropriation of another Minneapolis park is also being discussed in two community newspapers. Peavey Park—which contains the still-gorgeous public art project Touchstone Plaza at the corner of Park and Franklin Avenues—is the subject of stories by both the Alley and the Minnesota Spokesman-Recorder. In the latter, Dwight Hobbes discusses Peavey Park’s location as “stubbornly thriving, an eyesore of dealers, customers and hookers doing a hide-and-seek dodge with the Minneapolis Police Department.” He notes that parents are forbidding children from entering Peavey Park, and that police presence has greatly increased:

The afternoon of July 26, all hell broke loose in the area. You couldn’t swing a dead cat without hitting a cop car or seeing somebody detained or hauled off in handcuffs. MPD Third Precinct Commander Inspector Lucy Gerold states, “Proactive [law enforcement] in and around Peavey Park is up 49 percent year to date…in and around Peavey Park. We [will] continue enforcement.”

Robert Albee in the Alley describes an effort to take back the park’s gorgeous green space and art installation:

A group of Ventura Village volunteers led by residents Jim Cook, Dee Henry Williams and me showed up recently with a public address system and a hand-held microphone and offered it to anybody who’d speak or sing. No advertising or public notice, just the three of us and some sound equipment on a 97 degree day. In the next two hours, this abandoned corner that earned Peavey Park the distinction of being the most crime-ridden park in Minnesota came alive to the cadence of voices—mostly African American who talked their sorrows and joys, their salvations and challenges for anybody to listen.

Both articles note the importance of block and neighborhood associations in the reclaiming of Peavey Park, and the necessity of both preventing existing crime and repurposing the park for its original intentions: public space. The Alley caps this off by highlighting the art installed in the area, including the full text of Louis Alemayahu’s poem “Thrones,” which is featured on a plaque in Touchstone Plaza.

If everything crumbles and disappears, one terrible solution would be to keep order by using the old tanks from the Fort Snelling Military Museum, which the Villager reports is closing this year due to the Base Realignment and Closure Act. The museum acquired and restored U.S. military equipment and was the country’s “only official military museum with civilian workers,” according to John Hutterer, one of the museum’s many U.S. veteran volunteers. Villager reporter Dave Page writes that “As more people learn about the closing, more requests are coming in from museums, VFW posts and other organizations interested in acquiring the pieces.” The museum is still open by appointment (and only via “vehicle,” although that might mean “motor vehicle” or “car”), and will be open on the public on select Saturdays through September. (We suggest calling first: 612-713-3291.)

Even when our beloved city and nature things are destroyed or damage, there is always room for restoration, even if it’s in abbreviated form. The Longfellow/Nokomis Messenger featured the last natural spring in Hennepin County, Coldwater Spring, an area that was disturbed but not destroyed by the rerouting of Highway 55 in the mid-1990s. A 100,000-year-old spring, the National Park Service now controls the area, which has at least a 9,000-year American Indian legacy. With decrepit buildings nearby, the area’s future is uncertain, but the dream is that it will become “America’s first green museum,” according to spring expert Susu Jeffrey.

Regardless of property, questions of propriety, the ownership of names, and the level of noise can still be up for grabs. The Circle reports, briefly, that a judge has ordered the Mystic Lodge Casino in Nevada to cease using the name “Mystic,” which is trademarked by the Shakopee Mdewakanton Sioux Community of Minnesota. In St. Paul, the case of the Wild Onion’s denied patio liquor license will move to federal court, according to the Villager. In Jane McClure’s article, St. Paul City Council member Dave Thune says, “These licenses aren’t rights, they’re privileges,” citing the reason for denial as neighbors’ noise complaints. The Wild Onion is seeking damages of lost food and beverage sales, due to the denial of the license, and says the liquor license was unfairly denied. No matter what changes in our city landscape, we will continue to fight over whether the kids are too damn loud all the time.

Now that all of our public records—but not all of our community newspapers, and none of our public properties—are stored electronically, what will we remember into the next century? Will historic houses be as popular in 2111 as they are in Ed Felien’s remembrance of Lyndale Avenue? Or will we only talk about how that one time St. Paul proposed that it should have streetcars just like Portland (in the St. Paul Monitor, page 3, not yet online)? Everything fades, everything passes; everything changes, the best of intentions all float away, turn, turn, turn.

I guess this means I’m ready for fall. Or that I’m exhausted.

But in the meantime, make ideas happen now! Who knows, if all we have left in 100 years is the legacy we leave on computers, now might be just the right time to contribute to Twin Cities Runoff! We’re hosting an Open Shop editorial meeting to talk with writers—and maybe even decide on what we’re going to publish—on August 25 at Boneshaker books in Seward.