Over the years, the Minneapolis Park and Recreation Board (MPRB) has had its fair share of critics. Often the criticism has come from residents concerned about the amount of effort the Board and its members have put into providing resources to the community and maintaining park grounds and facilities. 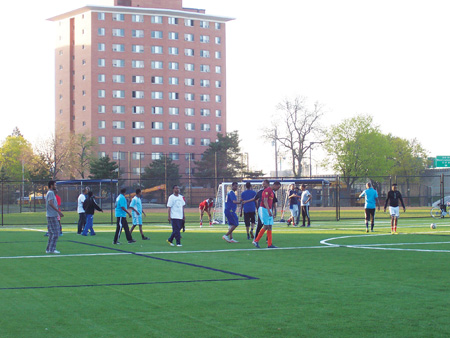 Some such critical sentiments were recently expressed in a story published in the MSR (“Youth sports build more than just muscle,” April 4, 2013), where youth sports coach and community leader Laverne Turner questioned if the MPRB’s actions were matching up with their claims of providing extensive programs and activities for youth.

MPRB Communications and Marketing Manager Dawn Sommers agrees with Director of Recreation Centers and Programs Al Bangoura that such concerns were warranted some years ago. “We saw the story…and we appreciate [and] we understand his [Turner’s] criticism of the time,” said Sommers. However, they claim that the MPRB has made significant improvements in recent years. The two recently sat down and spoke with the MSR to address the issue.

“A lot has changed since then in what we do for programming in facilities, particularly in [the Phillips] neighborhood,” explained Sommers. In 2007, Bangoura said, the MPRB “pulled together the community to address the needs of the community.” They met with people from organizations that service the Phillips neighborhood, which included Hope Communities, Anderson School, and Waite House/Pillsbury United Communities.

Collectively, Bangoura, the MPRB, and members of the community discussed strategies for improvement. Bangoura quickly realized the first thing to consider was how to make sure the MPRB was servicing the entire community. He explained how the process was initiated in the Phillips neighborhood:

“One of the things that Phillips did was that they had neighborhoods and blocks that were defined by Phillips West, Midtown, East and Ventura [Village]… My idea was that everybody within [those neighborhoods are a part of] Phillips; we’re going to serve all of them. So the organizations that came in together believed in that also, and said let’s move forward where we can address the needs of the community as a whole and not be so defined by blocks.” 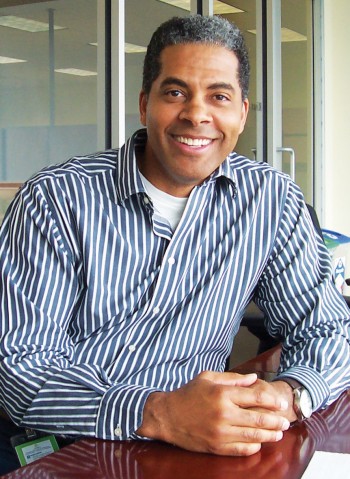 Left: Al Bangoura is director of recreation centers and programs for the Minneapolis Park and Recreation Board

Bangoura said he was able to make an immediate impact on athletic programming in Phillips. “From 2008 to the current time, we have pushed out probably 96 teams…and that’s from working in cooperation with a lot of the organizations and agencies and people who really wanted to see the sports programs grow. We knew we could address that right away.”

Bangoura estimated that the MPRB has serviced over 1,500 youth through sports programs in the Phillips neighborhood since 2008. “And it’s growing; this year alone we’re going to have five baseball teams, when we had none in 2007.” Bangoura said that there has been an increase in soccer and other sports programs as well.

The MPRB claims to have invested heavily in improving the grounds at the parks in Phillips. This included putting a new $300,000 soccer field made out of artificial turf at Stewart Park, a $4.4 million project at East Phillips Cultural and Community Center (EPCCC) that included the construction of a new community center and outdoor fields, and more than one million dollars invested in renovating the Phillips Community Center and its amenities.

Prior to 2007, Sommers says, “There were reasons we couldn’t do it beforehand.” For instance, Phillips Community Center was acquired by MPRB in 1987 after its closing as a junior high school. MPRB leased the space to the Boys and Girls Club until 2007.

“One of the challenges for us, and I think one of [the] reasons the perception was we weren’t doing anything back in the early 2000s, [was because] we really didn’t have the facilities to do much, because there were other people in these buildings.”

Many reasons are given for MPRB’s heavy investment in Phillips, among them the fact that it has the highest density of families with children and the most diverse population in the city. Bangoura and Sommers believe that “the Board is really committed to investing and providing in a neighborhood that really needs those types of resources.”

Sommers says the challenge has been “very exciting, and Al has been leading a lot of those efforts.” Even Turner is optimistic about Bangoura being the person building, strengthening and maintaining relationships between MPRB and members of the community.

“I’ve known Al since he’d been working in East Phillips. I always felt that he’s had the community’s best interest at heart and did the best that he could do under his authority. When I heard about his promotion, I thought that he was the right guy for the job… I think it might be a turning point,” says Turner.

Bangoura looks forward to continuing to work with communities on developing programs and is inspired by the level of involvement of the people in Phillips. “It has been a privilege to come at the time that I did, because this community did some amazing things.

“To be able to do what they did, to be able to come to us and work as partners, to be able to keep the Phillips Community Center open…it’s pretty amazing… It’s been a true collaboration and a true community building. If you want an example of how a community can rise from really not a lot…to where we are today… [It’s an] incredible story to see [EPCCC] up and running.”

The collaboration of neighborhoods, volunteers and organizations is an important factor in MPRB providing programs and amenities that meet the needs and desires of neighboring communities. It is what helped spur the progress that has been made to date.

“The dynamics and the reality of what the park was providing for facilities and services in the early 2000s in [the Phillips] neighborhood is drastically different in 2013 than it was in 2002 in facilities, programming, and community collaboration,” offered Sommers. She also feels the building improvements will help.

“When you don’t have the facilities, and the gathering places, and the places to play,” noted Sommers, “whether they’re athletic fields or community meeting [rooms] or all the things that happen in our 47 recreation centers [throughout Minneapolis] , it makes it tougher to have that type of [community] collaboration. And…the investments made in the facilities and facility enhancements were made in direct — very direct — collaboration based on what the community said they needed… That’s why they’re so successful.”

For more information on programs and activities offered at Minneapolis parks or to find out about volunteer opportunities, stop in to your local park, or visit MPRB’s website at www.minneapolisparks.org.