Talk about a local venture: In four months or so, Northeast Minneapolis might have a new, low-power, non-profit FM radio station that can reach listeners three to five miles away.

That’s Northeast resident Andrew McInnis’ vision for Radio 13, which he said will feature area musicians, events, and news. The station doesn’t exist yet and has no assigned call letters or frequency—although he has a specific one in mind that he hopes to get from the FCC (Federal Communications Commission).

McInnis said he decided to start a radio station after the Local Community Radio Act—which became law in 2011—opened the door for more than 700 additional low-power FM stations across the country. “The FCC changed from the “three click rule to a one click rule,” he said. (Each “click” on a car radio knob counts for one; it used to be that stations had to be spaced three clicks away from each other.) According to McInnis, “The FCC figured out there’s no need to have that much space between clicks.”

New stations must meet federal guidelines and prerequisites, he said. They have to be owned by non-profit corporations, they must serve an educational purpose, and they have to be non-commercial, meaning they can’t sell advertisements, but they can have sponsors. Minnesota Public Radio, for instance, which is also non-profit, relies on individual and corporate sponsors.

“Radio 13 is a non-profit, registered with the state,” McInnis said. “We will be educating Northeast residents and visitors about culture, music, news, events and weather. Anything that’s happening here. Our goal is for the majority of content to be created in Northeast.”

The application period for new stations was set, in 2011, at between Oct. 14 and Oct. 29, 2013. However, after the government shutdown, the FCC extended the deadline to Nov. 14. “We’re in that window now,” McInnis said. He hasn’t turned in the application yet, he said, because they are working on finalizing the “latitude and longitude” of their antenna’s location.

The first step is applying for a tower construction permit. “We should hear back on that in about three months,” McInnis said. When and if the application is approved, the next step would be “to trade in that permit for a broadcasting permit,” he added.

“Radio 13 will pay for the tower,” he said, adding that a tower costs at least $10,000. “Our goal is to raise $30,000 to $50,000 over the next 12 months.” Their expenses will include the antenna, a transmitter, an Emergency Alert System box (required for all stations), a computer and recurring expenses, such as rent. 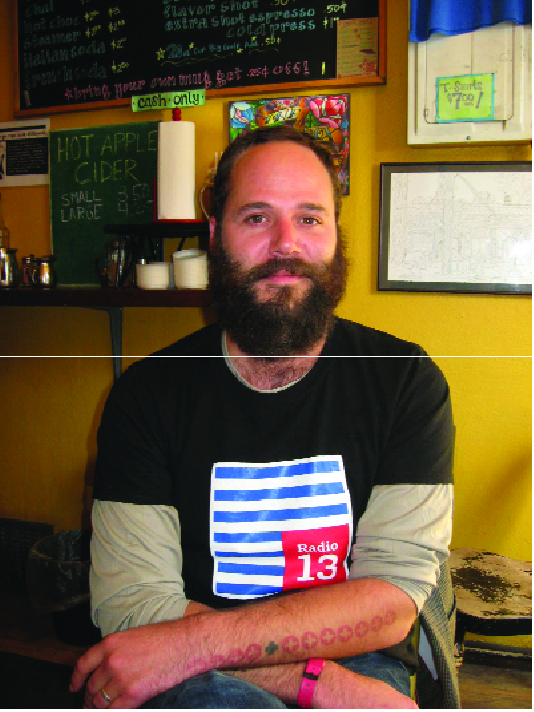 McInnis (right) grew up in a small town near Dekalb, Illinois, where his family owns an art supply manufacturing company. In his youth, he became interested in radio. “I took my first radio apart at age 6, put it back together, and it worked.” When he was 10, he saved enough money to buy a short wave radio, and was able to reach Japan.

He moved to Minnesota to attend the Minneapolis College of Art and Design, graduating in 2004 and specializing in interactive art, web design, and software applications. While in school and after graduation, he worked for Seward Leaning Systems and started his own web development company, which he later disbanded. He has held a series of what he calls “fill in jobs” to make money and support his family, including driving a cab for Rainbow Cab and “helping to build” the Best Car Service, a for-hire car service. He has also worked as a cook for Noodles and Company, Joe’s Garage and, most recently, the Northeast Social Club.

“Three years ago, I got this bug that I wanted to do radio,” he said. “I have experience in audio, video, and interactive media development.” After leaving the Northeast Social Club three months ago, he said he has been working full time on Radio 13. “We’re officing out of my house and looking for a storefront. We’ve spent 80 percent of our energy on getting everything done for an application for a low-power FM radio station. A three-to five mile radius is perfect. That’s all of Northeast. The other 20 percent of our energy has gone into community outreach.”

McInnis said the future radio station’s format isn’t set yet, but will likely include an eclectic mix of music that might feature polka, rock, heavy metal, and light jazz.