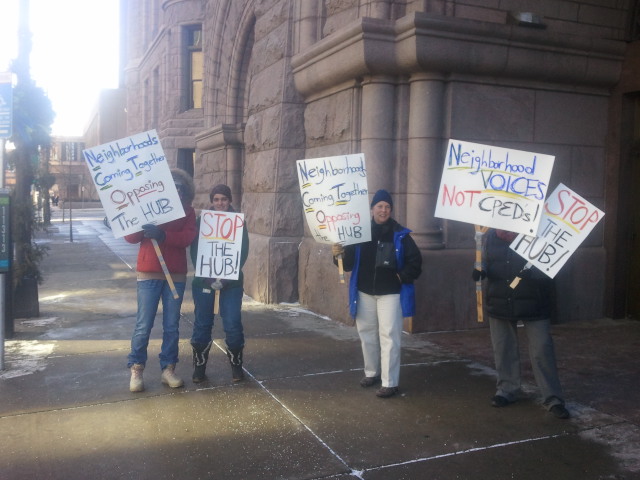 At today’s Community Development Committee, the West Broadway Hub proposal came for an initial vote. A yes vote would have supported plan modifications to the city’s overall plan and allowed the proposal to move forward as it has been presented. Instead, a motion to deny such support passed the committee unanimously.

About eight or so residents from several north Minneapolis neighborhoods gathered outside City Hall to show our dissent. The last time I was involved with neighborhood groups bringing signs downtown in protest was when the council dismantled NRP. So even in small numbers, the fact that residents were driven to this point is quite serious. Our political theater was meant only for outside the council chambers, though. Once we got inside and the hearing started a city staffer first clarified that a previous document indicated the Jordan Area Community Council and the West Broadway Business and Area Coalition supported the Hub proposal. That document, she said, was inaccurate in regards to those two organizations. JACC did not support the Hub at the time the document went out, and has expressed strong disapproval. WBBAC had discussed a Farmers Market at the site, and those discussions were misconstrued as support for the proposal as a whole.

Similarly, Stu Ackerberg spoke and although he obviously supports the Hub, the majority of his time was dedicated to an apology over how the process with the community has played out. This tone was absolutely necessary. There WILL be a Hub on the northside, and it may still wind up on West Broadway. Even if it doesn’t, there remains a strong likelihood that the development partners (Hennepin County, The Ackerberg Group, and Catalyst Community Partners) will stay the same. If that’s going to happen, then having those partners own up to the missteps is an integral part of restarting a genuine community dialogue.

When a video of the hearing is available online, I’ll post a link to it. But public comments were somewhat evenly divided in terms of numbers. I found several things interesting about those who spoke in favor of the Hub. At least two gave addresses well outside of north Minneapolis, and yet claimed they spoke “for the people” or “for the community.” The community, however, was fairly well-represented by neighborhood groups and residents who live in the impact zone. Those speakers were universally opposed to the project in its current form.

Others spoke about how the neighborhood group “didn’t represent them.” Well, yes, it kind of does. And if Jordan residents don’t like JACC’s position on the Hub, we have five open seats on our board. Anyone who meets board membership criteria and wants to be involved in Jordan neighborhood issues, please sign up.

The development partners also said that they spent more than a year looking for sites. After they examined places throughout north Minneapolis, the West Broadway site was the only one that worked for them. What we heard today was an affirmation that if the site doesn’t work for the community then the proposal needs either significant changes or a new location.

I heard two other points that didn’t pass the smell test. First, we’re told that the Hub project will bring all sorts of people to West Broadway, both employees and service recipients. That influx of traffic will be the impetus for new business development along the corridor. But when residents complain that this particular site is not designed to accommodate such large numbers (especially in light of the MPS building next door already needing more parking), then we hear that employees are mobile and will meet clients away from the site. I’m not sure how both of those can be true. Maybe a traffic impact study could sort this issue out in an impartial manner.

And neighbors were told that the community engagement process was handled in a more secretive fashion because Keith Reitman owns property in the development site area. They had to assemble the site under the radar or he’d have driven up acquisition costs. Reitman however, was at the hearing and presented himself as still owning property within the Hub site. That doesn’t line up either although it may be water under the bridge.

So the public comment period was closed, and the committee members discussed the proposal amongst themselves. Lisa Goodman asked for a motion to support the staff recommendation. Hearing none, she moved that the staff report be denied due to a lack of neighborhood support. Goodman was highly critical of the way the acquisition, land use, and zoning aspects had played out, and was disappointed to see non-profit expansion on what should be the northside’s commercial corridor.

She especially pointed out how north Minneapolis has received help that should ultimately be spurring commercial expansion. “Every time I voted to spend money on West Broadway it was to attract private investment.”

Robert Lilligren thought that such a proposal would be a better fit on a commercial corridor if it were “a part of something larger.” He referenced the Midtown Global Market as a place that has social services, but also incorporates small business development and housing. While a development of that scope is not presently in the cards, I appreciate the desire to include more amenities as part of any government or non-profit expansion within a commercial area.

Don Samuels concurred with others on the committee, that among the many competing interests, he had to give weight to the voices of community members and constituents.

The motion to deny carried unanimously.

This is not the end for the Hub. The developers will likely still proceed with attempts to get City Council and committee approvals. The community will push for an environmental impact study in regards to the effect of such a large increase of surface parking. And out of today’s decision, hopefully a more genuine dialogue with the community will begin.

(Photo by the Jeff Skrenes)