The corner of 14th Avenue and Fourth Street Southeast is the center of Dinkytown. In the foreground is Loring Pasta Bar, formerly Grays Drug. Adjacent to that on the left is a building that was once Dayton's University Store and on the right is Dinkydale, that was once a hotel. Photo by Bill Huntzicke

While agreeing that Dinkytown should continue to grow and change, the Minneapolis Heritage Preservation Commission unanimously recommended on June 9 that most of the four-block business district be designated for historic preservation.

The HPC decision came after hearing about two hours of testimony, some of it impassioned on both sides, but most of it in support of the plan to try to preserve the character of the small business district adjacent to the University of Minnesota in Southeast Minneapolis. About 20 people testified, raising first principles, such as the balance between free enterprise and urban planning and questions like what is history, what can be preserved, and what is Dinkytown.

HPC’s action is a recommendation to the Minneapolis City Council, whose zoning and planning committee will take up the plan at 9:30 a.m. on June 25, and the full Council could vote on it at its July 10 meeting. If the HPC had rejected the plan, it would not have gone to the Council.

In summarizing the 595 pages of her report and related documents, principal city planner Haila Maze said the themes of Dinkytown’s history involve the streetcar era, its orientation to the University, its unique commercial center and the continuing change and continuity of the area. Dinkytown was always a commuting hub for students, and 14th Avenue was always the original commercial corridor, even though “some of the earliest buildings no longer exist,” Maze said.

Michael Koop, of the heritage preservation department of the Minnesota Historical Society, criticized the report for stretching over so long a period – from 1899 through 1972 – and added that 1972 was too recent for historic designation. He also criticized listing the railroad bridges built in the 1990s.

Photographer Steve Bergerson traced Dinkytown’s history to the first railroad locomotive that went from St. Paul to Minneapolis in 1862 under the bridge at 14th and University avenues. “While it wasn’t the same bridge, it was the same space.” First came the horse-drawn trolleys and the development of businesses. “The Dinkys were switch engines in use in 1874 pulling lumber trains under those bridges.” In the 1890s, students could get on a train at 14th and University and go anywhere on the railroad.

Koop said his department, often called SHPO for State Historic Preservation Office, is required by state and city laws to review and comment on projects, but their recommendations are not binding. He said he regarded the city’s plan as a draft, and he praised the research by the city and Dinkytown advocates who have been documenting the area’s cultural significance. But, he said, he did not want to keep reviewing future drafts of the proposal as it’s updated. “I don’t want to go down that path.” 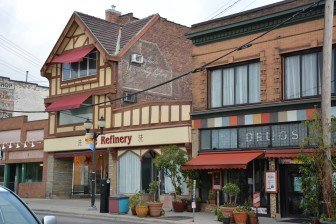 The Refinery salon and spa http://refinerympls.com location once housed Dayton’s University Store, as indicated by the “ghost sign” that remains on the side of the building. Photo by Bill Huntzicker

Commissioner Susan Hunter Weir said history should require changes and updates. “We should not be concerned that more information keeps coming up,” she said. “History is never done. There is always something out there. There is that letter, that picture, that one thing that changes everything. … I want to say to the business owners, ‘I hear you.’ There are still processes to work through that will help people through the guidelines.”

Guidelines should be collaborative and flexible, said Jack Byers, manager of long-range planning for Minneapolis Community Planning and Economic Development. “As individual structures we do not see the bridges that are there now as historic,” Byers said. “As part of the cultural landscape, though, Dinkytown would not be what it is without bridges over the railroad.

“The grade separation was done in the first decade of the 20th century. The city felt so strongly that they built diagonal bridges.” Bridges usually connect two points, but these bridges do more than that. “The bridge at Fourth and 15th connects points A and B and holds a city intersection as well.” He compared Dinkytown to the St. Anthony Falls and the Warehouse districts that have changed and evolved near downtown Minneapolis.

Kristen Eide-Tollefson characterized the situation as “delicate,” as she hopes for preservation guidelines that business owners can support. “I am a Dinkytown business owner and project coordinator for Preserve Historic Dinkytown. I’m very anxious to see these interests held together. The city’s small-area plan for Dinkytown has a market analysis that shows that its history and its quirky character are its appeal.” Further development could hurt that unique character and the appeal of its businesses, she said.

Maze said local eligibility relates to significant events and periods, significant persons and groups and distinct elements of the city’s identity, rather than architectural continuity alone, she said. “History at times isn’t tied just to the architecture,” Maze said. “Important things happened here. The case can be made for a lighter touch [in guidelines]. We talked about scale and massing – on the street – things that are called out in the city’s small-area plan.” 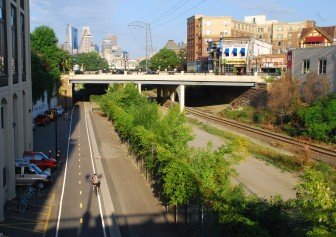 The trench, created as a below-grade railroad bed, cuts diagonally through Dinkytown and affords views of Downtown and supports the Dinkytown Greenway bike path as well as a service road and limited railroad use. Photo by Bill Huntzicker

Mike Mulrooney, president of the Dinkytown Business Alliance and owner of Blarney Pub & Grill, said his organization opposed historic designation without seeing the preservation guidelines. The University is the biggest engine of change, he said, and it will continue to make Dinkytown unique and eclectic without preservation. “The streetcar era is gone, and there isn’t much left to even know it was there. Vietnam protests happened everywhere and not just in Dinkytown. The trench is a bike path, and it will remain a bike path.”