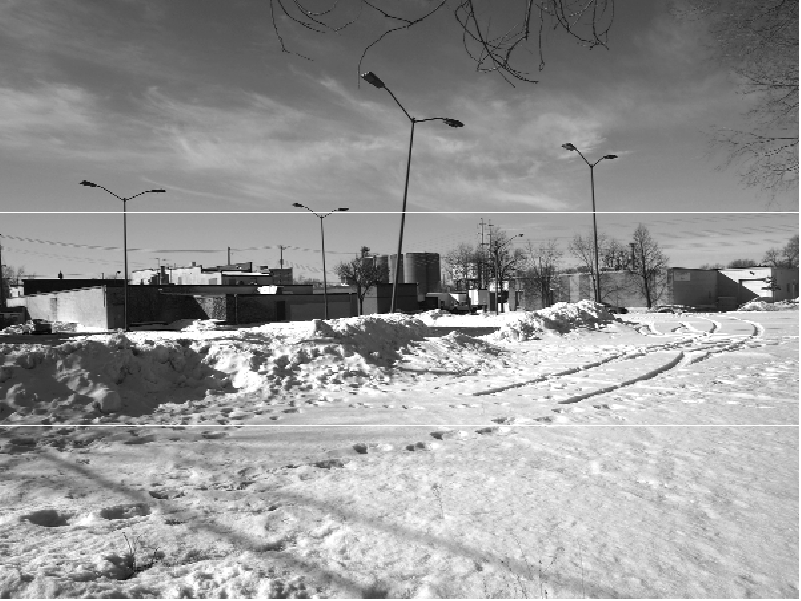 Viewed from the back corner of the parking lot, the back of the former Little Jack’s property is in context; industrial buildings along Second Street, a former grain elevator on California Street. A few blocks away is the new Lowry Avenue Bridge. To the north, a vacant lot owned with the house next to it. Part of the parking lot is cleared, serving two smaller business buildings that are not included in the redevelopment. (Photos by Margo Ashmore)

Is there life after Little Jack’s?

March 12, about a year after the City of Minneapolis adopted the 201 Lowry Avenue Northeast Redevelopment Plan, a developer will be talking to the Bottineau Neighborhood Association board about a combined but separated proposal for commercial and housing at the site. The meeting is public.

The last owner, LET Lowry LLC forfeited the land to the state for back taxes in 2010. City inspectors condemned the building for lack of maintenance Nov. 10, 2010. Hennepin County administers the property and could have auctioned it. But the city asked for and was granted a hold on it for possible development, in which case a pass-through/purchase from the county could take place. That hold technically expired Sept. 7, 2011. The property is zoned “C-2,” neighborhood corridor commercial district.

Confirming that the last City Council action on the matter took place March 8, 2012, Wesley Butler, the Community Planning and Economic Development (CPED) multifamily housing manager, said the city has been working on “arranging the county pass-through, which is an arduous tale of woe.”

Peter Remes of First and First , a development company, talked with the Northeaster, as did Lee Lewis of Clare Housing.

“The area’s got some challenges but does have potential. Little Jack’s [restaurant] was successful there for years.” Remes said they’ve found evidence of a beautiful façade, under the now windowless walls, that could be brought back and hopefully inspire other businesses. “The neighborhood needs a catalyst. The [new Lowry Avenue] bridge is open, and it’s such a grand bridge. New energy will reverberate.”

This would not be Remes’s first Northeast project. “I’ve been in real estate my whole [adult] life,” he said, but about five years ago, he started redeveloping the former Steven Fabrics building at 1400 Van Buren St. NE, then took on the Broadway building at the northeast corner of Broadway Central. Until recently, “when one of our tenants kicked us out,” he said, First and First’s offices were at the Van Buren building. They are now on the fourth floor of the former Theatre de la Jeune Lune downtown, another building they are redeveloping. First and First has developed projects in South Minneapolis also.

Remes is working with architect Dean Dovolis of DJR Architecture, the firm identified as the lead in the city’s resolution, which states, “it is anticipated that 201 Lowry will be divided into two new tax parcels, separating the southern portion (containing the existing building) and the northern portion (formerly used for surface parking). It is anticipated that the new northernmost parcel will be the location for future housing development.”

That housing, said Remes, would be a low-density Clare Housing site similar to what they have at 929 Central Ave. On Clare’s website, they state a general goal of increasing their housing opportunities for people living with HIV/AIDS by 60 units. This project would provide about half of that goal. Remes said, “This is the only housing party that’s expressed interest. No one’s super interested in market-rate [properties].”

Projects involving both commercial and housing often are driven by the strength of the housing component. That’s not the order here. Remes said he’ll fund the commercial project; no tenants lined up yet, “but [we’re] having preliminary conversations” and looking for a restaurant. He stressed that there are two different development teams for the two eventually separate sites. Java Properties is doing his real estate work, DJR the architecture. They expect to have to remediate mold and probably asbestos given the building’s age. 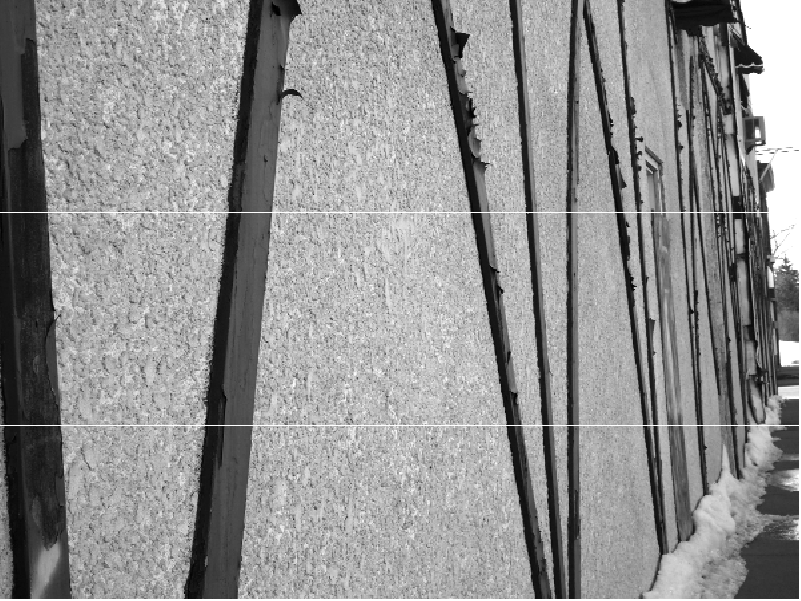 Clare is working with Master Properties and Cermak Rhoades for real estate and architecture, respectively. Lewis said the project would be 30–35 units of supportive housing for people living with AIDS/HIV.

Council Member Kevin Reich, whose First Ward extends south to the Lowry boundary, said he had “shared with city staff the key parameters” of wanting commercial activity there. “Leave it to the market, and we’d get the biggest apartment allowed. We pushed for commercial on the street. If there needs to be housing in back, fine.” The process “stalled out a bit and the numbers weren’t quite going together, but now there is momentum and movement. They’ve engaged with Marshall Terrace and listened to community concerns.”

Langason said, “Marshall Terrace neighbors around the property in particular are concerned about the potential of increased traffic in the adjoining alley and the loss of privacy in their backyard when the proposed four-story apartment complex comes in. There is [some worry due to] the uncertainty of the businesses that may come in.”

He continued, “I feel some disappointment that City Hall and Hennepin County had these plans and discussions without including the neighborhood. I am still digesting what they are planning to do and wondering why the powers that be select our neighborhood for tax-exempt developments and concentration of rental housing.

“This Little Jack’s development is just on the heels of the erstwhile proposed Salvation Army housing on St. Anthony Parkway and the county/city decision to go ahead with another version of the Waste Recycling development on 27th & 5th. There are mixed feelings in the neighborhood about the Little Jack’s development, many earnest questions, not many definite answers. I hope the city/county will not be heavy handed, and [that they will] consider involving the neighborhood more.”

Reich, asked why there had not been a request for proposals process competitively seeking developers, said it’s standard practice, once a developer is interested, to award exclusive development rights for a set time period. RFP’s and other competitive processes are generally used “when there are reasons to do it, like a design contest or as a tool for community organizing.” For example, the disposition of 807 Broadway, the former school district headquarters, was an RFP-appropriate situation. “It’s a way for two entities who have an interest (potentially competing interests) to work together and create an arena for active citizen participation.”

Reich lauded Remes’s “dynamite work” with his other projects. “He loves Northeast and he loves the creative dynamic. He does retail, not begrudgingly. He thinks of it as the cornerstone. It’s an unusual approach that fits the parameters here.”

Regarding the housing, “if it is Clare, they’ve built a very beautiful building on Central, and are good neighbors. I hope they look on this northern edge as an area deserving as good a design” as anywhere else, Reich said.

“There’s always a conversation to be had, and it should focus around management, design, flow, and use of space. That’s what you see, live with, and will be judged by. I hope it doesn’t turn into ‘those people’ arguments, but [that it will instead] stick with form and impact,” Reich said.

Clare Housing’s Lewis said they’ve been on board for about a month, and got introduced through Reich as they were looking to find their next property. “We have 216 people on our waiting list; the need is clearly there.” Projects like this involve from five to nine different funding sources, of which low-income housing tax credits are the major piece.

The city has a certain number of such credits to authorize for projects each year, and projects compete but usually get chosen if they can wait in line long enough. “If we’re lucky, that will happen within two years,” Lewis said, “if [we’re] not lucky, three.”

Jeff Strand of Hennepin County Taxpayer Services, said the county had the property appraised in May 2012 and it was valued at $150,000. With other fees included, the price to the city would be $169,455. He pointed out that this amount would go back to the taxing jurisdictions (such as the city and schools) for the taxes they were owed, as well as to reimburse the county its holding costs.

Hennepin County hasn’t invested in doing environmental analysis because the city or developer would be more efficient at doing that, Strand said. His department had drafted a consultant service authorization in August 2012 for about $11,000 to do a predemolition hazardous materials assessment inventory but did not proceed. Strand said he believes the county has started to clear the title on the property.

Cherie Shoquist of CPED, the point person assigned to the project, was out of the office late last week, but her colleagues expected she would have an update soon. Strand said that if the city doesn’t indicate it’s going ahead by a certain date, “I’d expect maybe in the next 60 days,” the county could decide to reconsider their stance and take whatever action they think prudent.

Reich talked about the master planning done in the mid-2000’s for Lowry Avenue, a Hennepin County road. “Uncertainty can be as damaging” as any plan, Reich said. He and an aide in new County Commissioner Linda Higgins’ office said they and many neighbors are agreed that the “clear-cutting” approach that Hennepin County took in North Minneapolis and proposed years ago for Northeast, will not be appropriate in Northeast.

“This section of Northeast isn’t brimming with activity, but it’s not classic blight either; you don’t see a lot of [boarded-up buildings].” Reich said he has advocated a “pruning” approach and hopes that singular projects can be found to jump start redevelopment, 201 Lowry being the prime example.