The present and future of comic books is “a brave new world,” said Nick Postiglione, co-director of SpringCon 2010. SpringCon is the Midwest Comic Book Association‘s huge event connecting thousands of comic book fans with their favorite comic book creators and dealers from around the world. To be held May 15 and 16 at the Minnesota State Fairgrounds, the 22nd Annual SpringCon features hundreds of comic book creators, and about 50 dealers in the space of 80,000 square feet. The MCBA hosts a similar festival in the fall, but it’s only a one-day affair due to the fiercer competition for creative folk at that time of year, said Postiglione.

“The interface between the fans and the creators is an interesting thing about SpringCon,” Postiglione noted. “The creative people are often taken aback by the fans’ level of interest. Sometimes they wonder, ‘Why would anyone want to see me?’ and then they get swamped. It’s energizing and gratifying for them. It’s a really nice community that doesn’t get a lot of face-to-face interaction.”

A couple creators Postiglione is excited to host are Jim Shooter and Georges Michael Jeanty. Shooter, a head editor for Marvel Comics in the 1990s, was a child prodigy, beginning writing comic books at age 15 for DC comics. He also created Valiant Comics, the first widely recognized indie comic. Jeanty, lead artist on Buffy the Vampire Slayer, was involved in the first marriage of TV with comics, collaborating with writer Joss Whedon, who planned to write Buffy series #8 as a comic book. “The numbers surpassed X-Men and Spiderman in sales,” says Postiglione. “This is the first MCBA con for them.” (A “con” is a gathering of fans; the term is most commonly applied to gatherings of fans of sci-fi and fantasy culture.)

Comic book creators are happy to come to Minnesota, which is “freakily high in comic book artists and creators per capita,” said Postiglioni. He added that comic book consumption is also “off the chart, nearly double the next highest state, Wisconsin. We still like our books, and reading and have really high literacy rates. That’s going back 20 years, and is still going strong.”

The local comic book world has changed significantly, and continues to evolve. Dreamhaven Books and Comics owner Greg Ketter has attended comic cons since the early 1970s; that’s how he began collecting and selling comic books, art, graphic novels, and science-fiction books. He ultimately opened Dreamhaven Books and Comics in 1977. “The MCBA con has such an enthusiastic crew, it feels like an earlier time,” said Ketter. “The New York City and San Francisco cons are more media-oriented. We have more comics. It has more of a small-town feel.”

Ketter has witnessed the evolution of comic over four decades. He always had fascination with fantasy art, prints, posters, and early underground comics, now “mainstream.” He also noted there are more realistic graphic novels, which didn’t exist until the late-70s. “Will Eisner did some real literary stories,” Ketter noted.

A major change in recent years is what Ketter calls, “the Balkanization of comics. Now, there are about 20 different comics based on one character. We’re selling 30-40 of one seller versus when we used to sell over 100,000 of one seller. [Neil] Gaiman’s stuff stays in print, though!” 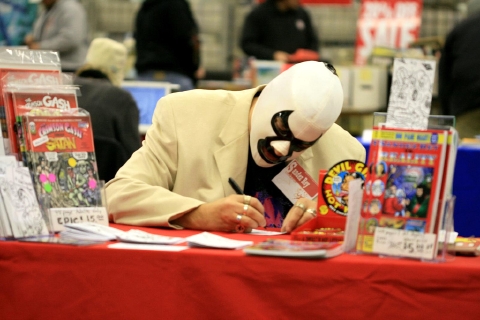 Ketter, who runs the official Web site of Neil Gaiman, creator of the multimillion-selling Sandman graphic novel series, carries all variations of books and products Gaiman-related. “I met him in his teens,” said Ketter. “We’re friends. He often brings in signed copies.”

Always drawn to alternative and unusual works such as Love and Rockets (one of the first alternative comics), Ketter currently sees a huge trend in Manga (Japanese comics) and steampunk comics—such as Girl Genius by Phil and Kaja Foglia. “They’ve gone to the forefront of the steampunk movement, which has a broad appeal to younger people and teen girls.”

Ketter, who’s known collectors for for over 35 years, now sees them with their kids and grandkids at SpringCon and FallCon. “I’m always pleased to see little kids get into it. We were really excited about comics when we were kids; it’s great to see kids still get excited. I hope they stay with it.”

Postiglione also observes demographic changes. “There’s something for everyone. That’s not a cliché, that’s genuine. More females, older people and younger people, are reading comic books. Last year, a woman who you could tell was dragged there by her boys found a comic book with knitting in it. She got excited about it, bought it, and thanked us for introducing her to it. There’s something exciting here for everyone.”

Postiglione is excited about glimpses of the future of comic books. “I don’t know what the next ten years will be like. We’re just getting a a peek at the deck now. The cost of entry has been decimated. Self-publishing and new technologies for sharing and sending…that’s the beauty of it all. The other day someone showed me a comic book he made for iPad. He flipped through the pages just as you would the print version. Kids are more visual now than we were. That someone could create something and possibly sell a million the next day…it’s an exciting time.”