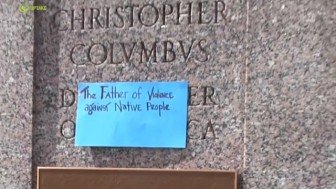 Native American activist groups in Minnesota would like people to learn the real history of Christopher Columbus and quit putting him up on a pedestal at the State Capitol.

“We all know in 1492 he sailed the ocean blue,” said American Indian Movement Chair Mike Forcia. “And in 1493 he stole all that he could see.”

For more than 83 years a statue of Columbus has gazed from the Capitol toward Minnesota’s Justice Center. For Forcia, real justice would be removing the statue.

“We need to deport Columbus,” said Forcia. “We can’t be celebrating genocide anymore.”

Genocide isn’t a word most history books associate with Columbus, but he enslaved Native Americans. As governor of the large island he called Espanola (today Haiti and the Dominican Republic), Columbus’ programs reduced the native population from as many as eight million at the outset of his regime to about three million in 1496.

Minnesota’s legislature is considering a bill that would change the engraving on the statue from “Discoverer of America” to “Christopher Columbus landed in America.” A co-sponsor of the House bill includes Rep. Dean Urdahl (R-Grove City), who taught high school government classes 35 years.

That change misses the point, say Native Americans who marched through downtown St. Paul Saturday to the Columbus statue.

“This is not the right decision with history to re-engrave another lie with another lie,” said one of the marchers with a bullhorn. “That’s all we’re doing. From ‘Discover of America’ to ‘Landed in America.’ It’s a lie, it’s still the same lie. It’s scratched out with another lie. We want this removed and replaced.”

On Saturday demonstrators covered the “Discover of America” engraving with a blue sticky note that read “The father against violence against native people.”

Forcia says Representatives Karen Clark (DFL-Minneapolis) and Susan Allen (DFL-St. Paul) support removing the statue “and hopefully we’ll get one of our Dakota people put up in his place. Because this is Dakota territory.”

Several Native American activist groups not affiliated with AIM also held an event at the capitol to express their displeasure with the statue. The Ogichidaakwe council’s elder group sang and spoke. They hosted a round dance with drum and singers from the Center Schools of Minneapolis and the red solidarity shawled women of Minnesota Native Lives Matter and Native Lives Matter Coalition. The red shawls honor the survivors of violence and were from the Minnesota Indian Woman Sexual Assault Coalition and the Sacred Hoop Coalition.