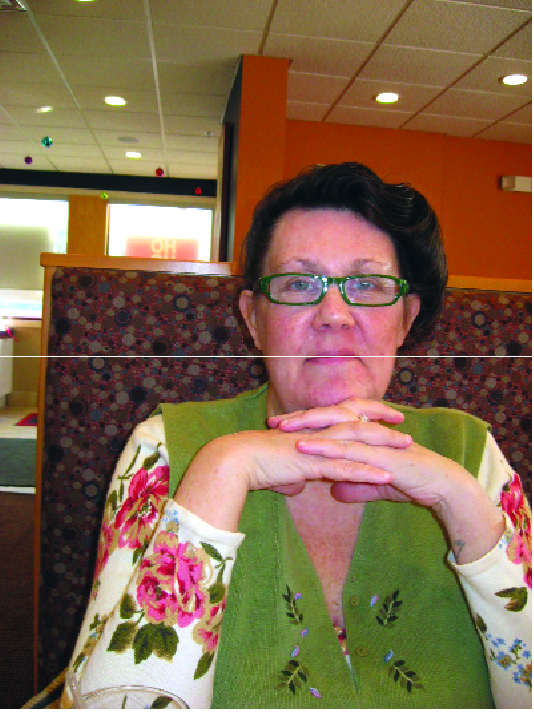 Columbia Heights writer Jennifer (Jenny) Elaine Jones-Sorge’s recently published children’s book about bullying, called Monsters, Monsters, Monsters! The power in me is bigger than any monster I’ve ever met! includes her own paintings, drawings, and a lifetime of good and bad experiences.

The book, published by Publish America in Maryland, is targeted at kids four years old and up. Its eight rhyming stories address the bullying problem from different viewpoints: the bullied, the bully, and the reformed bully. It also tackles childhood fears, self-empowerment and even, in a story about “Uncle Eddie,” possible mental illness.

Jones-Sorge said she experienced bullying herself when she was young. The daughter of a Navy recruiter, she said her family moved frequently. “I was very tall. I had freckles and long braids. I was always the new kid. I stood out. I was bullied.”

She moved to California, went to school and got a job she loved, teaching pre-school and kindergarten. Her former boss, Susan Huber—director of Christopher Robin Preschool in Hollywood, California—remembers her as being very creative. “Jenny taught here for many years,” Huber said. “She loved reading to the children. They did story plays with her. We were very happy to have her here.”

Jones-Sorge married and had two children, a boy and a girl. Her first marriage was a disappointment, she said, because through the years her husband became increasingly verbally abusive. “He was so charming that he even had my parents swayed. But he was also a bully. He would get in my face and threaten me, saying things like, ‘Baby, you don’t know what I can do.’ Emotional abuse absolutely pounds you down. I was numb. I finally got the guts up to do something about it and get away from him.”

After graduating from Palomar Community College in San Marcos, California with a certificate in childhood development (“I had a 4.0 grade average and won an award for being the most outstanding student in my graduating class,” she said), she found work as a childhood center director.

When Jones-Sorge back moved to Minnesota (“I was born here, and my grandmother and aunts lived in Columbia Heights,” she said) she met her current husband, V. Wayne Sorge, who is also an author. A former newscast journalist, his book Watching Death: Capital Punishment in America, is about his experiences viewing and reporting on executions in his home state of Texas.

Starting in the 1980s, Jenny indulged her whimsical side by clowning around. She became a professional clown, creating the character of Sniffles McGee, a tramp clown. She joined the Agape Clown Club. “We went to Stillwater prison and performed for the prisoners’ children. We had a solid schedule of bookings for a year and a half. We’d get together every week and write our own scripts. We got good at putting on our makeup quickly.” She hasn’t done much clowning recently, she added; her art and writing now take up most of her time. “I love illustrations. I work with pen and ink. I used to do oils, now I paint with watercolors. I also do artistic topography.” Little Strokes Gallery (an on-line gallery) has displayed her paintings. She designed a polar bear fundraiser tee-shirt for artstee.com, a company that puts designs on tee-shirts.

Another thing that drains her energy and time is fibromyalgia, a painful illness that affects her joints. Still, she said, she manages to paint and write as much as possible. She said she began Monsters Monsters Monsters! without planning it out beforehand. “I was just sitting at the computer and it came to me. I started writing and kept going. There was sort of a snowball effect. It molded itself into the eight chapters. Each story is written in the first person, but from different viewpoints.”

A lover of words, Jones-Sorge included some “old fashioned” real words whose sounds appealed to her, such as snollygoster (a person who can’t be trusted, lacking integrity), canoodle (to hug and kiss), and gobbledygook (nonsense). They are listed in a glossary at the end of the book.

She said one of her current projects is a teaching curriculum that she created for working with children. “I used it when I did some private home schooling. I am working on it now, trying to make it more user-friendly.”

She said she enjoyed working with PublishAmerica—which also published her husband’s book—because they listened to her. “It was easy to work with them,” she said. “I appreciated it that they let me use my own illustrations.” She added that she did not self-publish; PublishAmerica is a “real” publisher that paid for printing and pays her royalties. (PublishAmerica’s slogan is, “We treat our authors the old fashioned way—we pay them.”) Its press release on Jones-Sorge’s book says that it gives youngsters “the straightforward and honest voice they need and deserve regarding bullies and the other disruptions that many children face.”

The book is available through www.publishamerica.com or directly from Jones-Sorge. Contact her through her blog, www.hearawhisperat.blogspot.com or her e-mail, com4tea@yahoo.com.