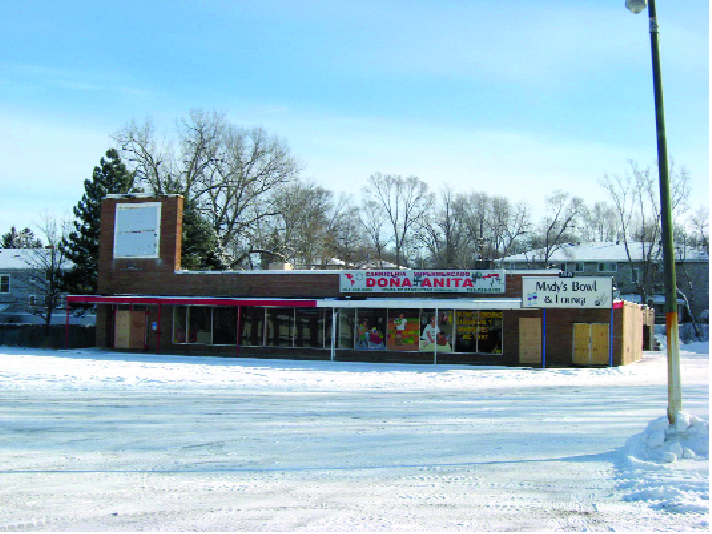 The former Mady’s site, where there’s no specific plan and need for site cleanup. (Photos by Gail Olson)

It seems that Columbia Heights is looking good, lately, to some local developers. City officials recently heard a preliminary redevelopment proposal that could include a public library, city hall and senior housing at 40th and Central, and another developer plans to build single family houses at the Grand Central Lofts site, 49th and Central avenues.

In addition, the city is working to shape its own future, with the Dec. 13 acquisition of the “Mady’s site,” a parcel on Central and 39th avenues NE that formerly housed Mady’s Bowling Lounge and a Salvation Army Thrift store.

Scott Clark, Columbia Heights Community Development Director, said the city agreed to pay $905,000 for the Mady’s site. “That property has been identified by the city as a key development site in the city’s comprehensive plan for some time. It offers a good-sized parcel with depth to the property.”

At one time a private dump, the land will need some cleanup. “What goes on that site will depend on what we have to do in soil mitigation,” Clark said. “Our understanding is that we can probably mitigate most of it on site, and we can use the parking lot as a cap.

“We don’t have a specified use right now. We are buying this property to control our own destiny on property redevelopment,” he added. The next steps include asking the city council for guidance on possible uses, then testing those uses in the actual marketplace. Once the city has a viable idea, it will seek development proposals and clean-up grants from government agencies such as DEED (Department of Employment and Economic Development) and the Metropolitan Council.

The city bought it from a partnership that includes the owners of Columbia Heights Rental, 3901 Central Ave. NE, property that will be excluded from a city redevelopment plan. Gene Mady, long-time owner of the strip mall and bowling alley, no longer owns it and is not in the partnership.

The strip mall is vacant. Columbia Heights will seek grants for building demolition, which Clark estimates will cost about $125,000. “The building was getting close to end of its useful life and becoming problematic,” he said.

A neighboring city-owned site to the north— where a Burger King was razed—might once have been a wetland, Clark said. It too has a soil quality issue, and will likely require storm water management. “It’s all part of the investigation. The Burger King building was built on pilings.”

On Jan. 24, the city council, library board and library task force had an “exploratory discussion” with construction managers who, Clark said, “want to explore repurposing the Northeast Business (Center) Building” on the southeast corner of 40th and Central avenues NE. The plan might include relocating the public library and city hall, and adding senior rental housing.

Also known as the Columbia Heights Office Building, at the southeast corner of 40th and Central, its tenants include Northeast Bank and an alternative high school, Northeast Metro 916 Heights Academy. “There is a deep vacancy issue, 70 percent, at that building,” Clark added. “It’s worth the time and effort to explore it.”

Dave Jasper, of Stadium Village Partners, owns the building. If the city decides to buy it from Stadium Village and redevelop it, Dunbar and Amcon are proposing that the city hire them to implement their plan. The proposal includes adding an 18,500 square foot bump-out on the east end of the building, which would remove the second floor deck and ground level drive-up bank area. A new city hall area on the first floor would occupy 9,500 square feet; the library, also on the first floor, would have 20,500 square feet. Floors three to six would be repurposed from offices into 60 units of market rate senior rental housing. The second floor would house some rental units, a management office, a community room and a workout room for the apartments.

Clark said that as part of the process, the city will do a housing market study. “The demand for office buildings has shrunk,” he added.

Sheila Cartney, Assistant Community Development Director, said that if the proposal were to go forward, “The city would own the building and hire a management company. It would not be public housing; there would be no [income] restrictions or limits on tenants.”

Clark added that the housing component will be relatively small, with only 60 units, and would “remove the uncertainty over whether this office building could come back and be economically viable. If that building becomes something different, with a strong identity, what does that do for the Mady’s property? It might give us the ability to attract a higher-level development.”

Columbia Heights City Manager Walt Fehst said while the plan offers a “wow” factor, with a beautifully remodeled building, there are other concerns. “We’re aware of the fact that they’ve lost a big tenant and the building is 70 percent empty, but it is on the tax rolls, and (the city would lose) $30,000 to $40,000 of the $170,000 they pay in taxes right now.”

The concept is interesting, however, Fehst said, and the developers have experience building libraries. “I like the idea of senior housing, and residents would have great views in those units,” he added. “The question is, can the city afford it?” 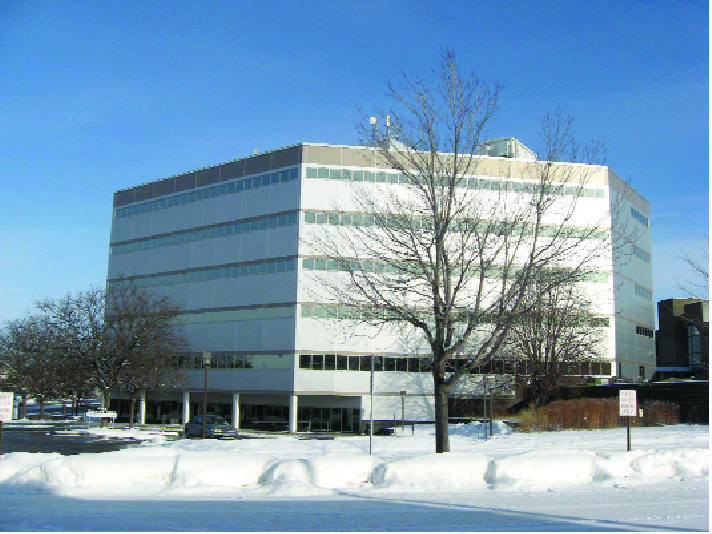 The office building, built in the 1980s, at 3989 Central Avenue. It could become a new city hall and library with senior rental housing above.

Cartney said that Tier 2 Funding is proposing to build nine small-lot single family homes on the Grand Central Lofts property on 49th Avenue NE. Tier 2 has a purchase agreement on the property.

The Grand Central Lofts development originally was to include three tower condominium buildings with 60 units each—of which only one tower was built—and 21 townhomes, of which 10 were built. The nine new houses would replace the 11 townhomes that the city had originally approved.

The developers need site plan approval from the city. “The application is going through a preliminary and final plat, easement vacation and site plan review,” Cartney said. The Planning Commission will meet Feb. 5 to discuss it, and will forward it to the city council. 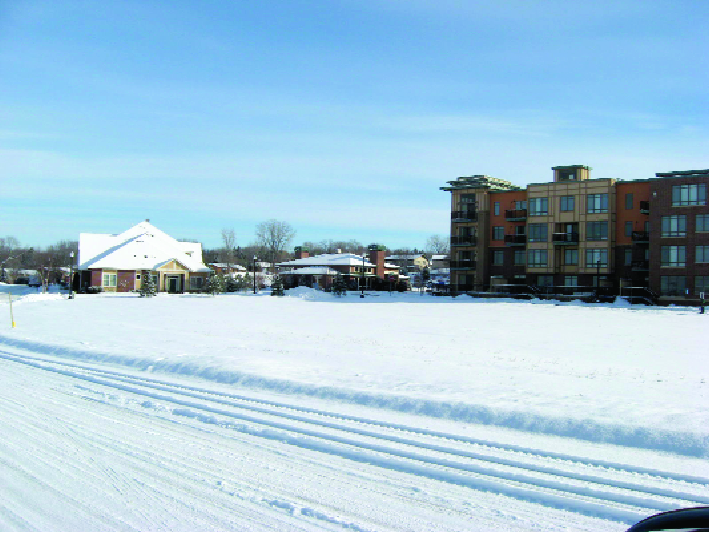 The one Grand Central Lofts building that was built before the economy tanked, and below, some of the townhomes built in the complex at 49th and Central. There’s a proposal to build nine new houses on some of the remaining land. 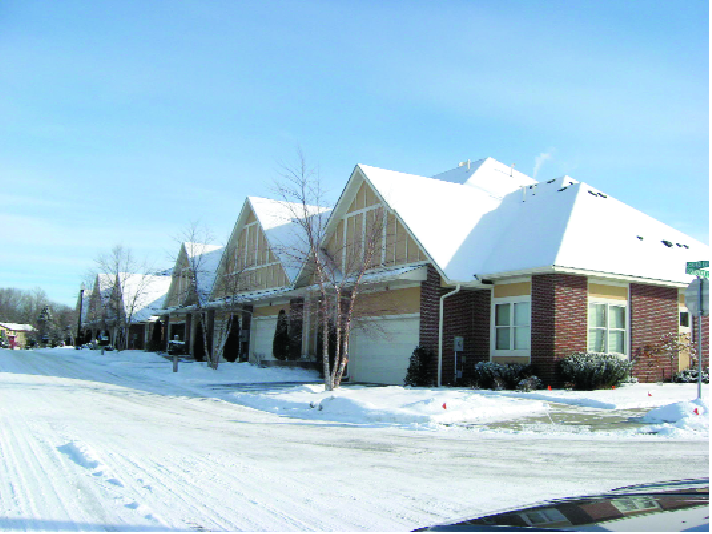 Columbia Heights is in the process of selling two other senior housing buildings that it owns, Parkview Villa North and South, to Aeon, a local non-profit developer. The Department of Housing and Urban Development (HUD) built the north building, 965 40th Ave. NE, which includes 101 public housing units, more than 30 years ago and turned it over to the city to own and manage. In the 1990s the city built the adjoining south building, which includes 45 market rate senior rental units. Clark said the Parkview sale will likely be finalized in September or October.

Clark said his department has been very busy, lately, with many projects, and because of recent budget cuts—which eliminated a city planner position—are down to two people. “We’re seeing a lot more interest right now,” he said, “but most of these projects are complicated. Every one has its own story attached to it.”