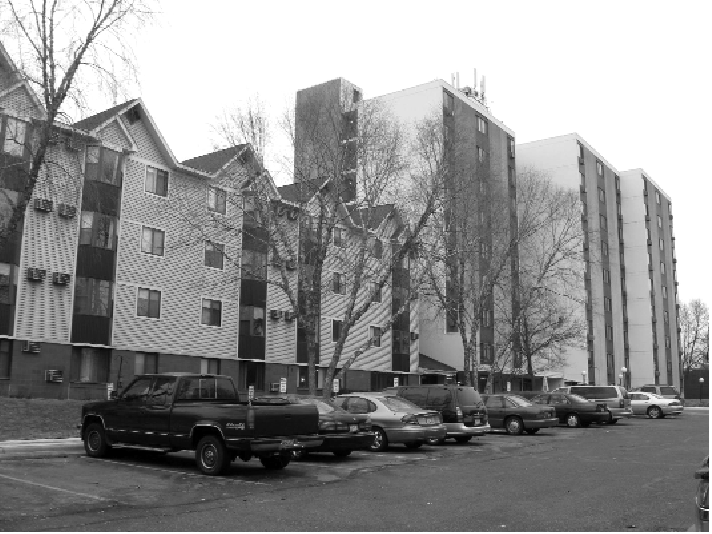 Parkview Villa in Columbia Heights consists of a high rise built in the early 1970s to provide housing for seniors and people with disabilities; and (in foreground) a building built in the 1990s that is 45 units of market rate rental for people ages 55 and older. The city is negotiating for Aeon, which has a portfolio of suburban as well as city properties, to own, rehab, maintain and manage the complex in the same spirit as it is now. (Photo by Gail Olson)

Although Columbia Heights’s sale of Parkview Villa to non-profit developer Aeon will be delayed a few months, Gina Ciganik, Aeon’s vice president of housing development, said it’s nothing unusual. “It’s not a glitch or a snag, or anything like that. It’s real estate development. You can’t anticipate any piece of the process, and we’ve never been able to pick a closing date. We just got our funding from the State of Minnesota, [Minnesota Housing Finance Agency, MHFA] and we feel it’s all falling into place.”

Parkview Villa consists of two buildings north of 40th Avenue NE and east of Central, just behind the Columbia Heights Mall. The northern one, Parkview Villa Senior Citizen High Rise, 965 40th Ave. NE, has 101 units, one of which is the caretaker’s residence. The federal Housing and Urban Development agency (HUD) built it in the early 1970s as part of a program to provide housing for seniors and people with disabilities. As soon as the buildings were finished, HUD turned them over to Columbia Heights to own and maintain. Known as a PHA—or public housing agency—building, the City of Columbia Heights has owned and managed it for more than 30 years. According to Columbia Heights Development Director Scott Clark, a PHA is similar to a Section 8 project—although Section 8 rents typically are higher—in that residents pay a third of their income toward rent, and the government subsidizes the difference to the city. Also, every year, HUD provides $90,000 for modernization.

In the early 1990s, the city’s Housing and Redevelopment Authority (HRA) authorized construction of the south building, which has 45 market rate rental housing units for residents 55 and older.

Clark said the city wants to sell Parkview Villa because owning and managing housing has become very complicated. “Demographics have changed. You need additional services to make housing work better. Cities are not experts in the complexities. It’s a different ball game than it was 30 or 40 years ago. There might be a future financial liability. And owning real estate is not a core function of the city. We want to maintain the affordability there, but we want somebody who is an expert at housing. You need a partner knowledgeable about bringing together a lot of multiple services. Aeon is able to get MHFA financing, which means this project works from a structural standpoint.”

For the last seven years, Columbia Heights has hired Common Bond, a non-profit corporation, to manage the two buildings.

“Residents will be paying the same rent after the sale,” Clark said. “Aeon wants people to stay so that they will have a full building. I feel that the transition so far has been very manageable and workable. We have many levels of communication with the individuals at Parkview through quarterly HRA meetings, monthly residents’ council meetings, and five special meetings we held within the last year and a half. One of the HRA members, Rita Nelson, is also a Parkview Villa resident.”

Clark said that the sale “allows us to bring in at one time a very significant amount of capital. They will be doing a major amount of rehabilitation for both the north and south buildings. There are no final numbers, but they will be doing well over $2 million in rehab, including a community room upgrade, energy improvements and new windows.”

When asked about the purchase price, Clark said that Aeon has to buy the buildings at their full value. “On the north building we can’t technically have access to those proceeds. We didn’t build it. The net out, after the sale, is that the city gets substantial rehab put into the buildings. Realized cash ultimately could be about $1.9 million. And, we will get a housing provider experienced in dealing with this type of property. They will work through all the pertinent services.”

He said that he recently asked the Columbia Heights City Council to allow him to change course with HUD. “We felt that our first application would be rejected by HUD and I told the council that we didn’t want to receive an official rejection. We recommended that we withdraw from the first process and restart on ‘Path B.’ It’s just a different road. From a business standpoint we were trying to do the best we could with HUD.

“We’re working through what it means to us. We may have to find more money in grant funds or pare back. We lost about five to six months. We’re probably looking at the third quarter of 2013 to close this deal. This is amazingly complex and difficult. There are so many parts to get done. I’ve been in this business 30 years and have never seen one like this.”

“However,” he added, “We do have a signed purchase agreement on this deal. Aeon likes this project a lot.”

Ciganik, of Aeon, said that Parkview Villa “is a good property to take over. Thankfully, Columbia Heights has done a really good job as stewards of these buildings. Of course, certain systems will need to be replaced because of the age of the buildings. One of our core values is sustainability. We will make improvements that conserve water, make the residents more comfortable and reduce energy costs through energy efficiency. Our contractors and architects are looking at the property now to see what’s needed.”

When asked if it was true that the rents wouldn’t go up under new ownership, she said, “I know, this is change, and everybody worries about it. We are honoring the rents. We’re a mission-based organization and the City of Columbia Heights picked us for certain reasons. This wasn’t about a financial deal. The city wants to preserve affordable housing and that’s why we were chosen. We’ve done this before and we know how to do it. We have been in business for 26 years and have never sold a building we’ve purchased. We engage in the community.”

Aeon’s Communications Manager Kim Sheagren said that Aeon’s suburban properties include Clover Field Marketplace in Chaska, Sienna Green in Roseville, and The Crest Apartments in Brooklyn Center. In Minneapolis, it owns many properties, including The Balmoral Apartments on Portland Avenue S., The Cedars, 2805 and 2813 Cedar Ave., and Ripley Gardens, 301 Penn Ave. N.