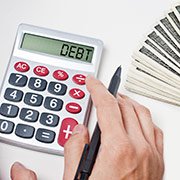 This drag on economic performance isn’t perfectly documented and analyzed yet. It is coming in bits and pieces. Yet an increasing body of financial house studies and analytical journalism finds linkages too strong to be ignored.

The first data set is that college debts for recent graduates and current students have reached $1.2 trillion. The second, he said, was Federal Reserve Bank of New York’s findings earlier this year that 31 percent of college loans are now delinquent.

“This has to have an enormous impact on the overall economy,” Dahlheimer said, and is a crisis calling out for public policy assistance.

College students need debt management counseling when they take on college loans, similar to the way the U.S. Department of Housing and Urban Development (HUD) provides mortgage and foreclosure-bankruptcy counseling, he said. “Right now, all across the country, the only counseling college students get is how to get loans; nothing on how they will repay them.”

Such counseling could be provided for in the overhead cost of the student loans, and the 600 members of the National Foundation for Credit Counseling (NFCC) are in place to provide low-cost financial services, he added. LSS Financial Counseling Services, for instance, is a fully accredited nonprofit counseling service in Minnesota and Wisconsin. It is part of a pilot program, along with Urban Edge group in Boston, providing counseling through a unique Center for Excellence in Financial Counseling program at the University of Missouri.

Ideally, Minnesota and national leaders should be looking at debt relief, or debt forgiveness programs similar to efforts underway to get doctors and medical personnel into rural and underserved communities, he added. That could be a third public policy response.

Student debt problems are nationwide. Minnesota is no exception.

The Project on Student Debt organzation found in its student of 2012 college graduates that Minnesota ranked fourth, after Delaware, New Hampshire, and Pennsylvania, for graduates holding the highest amount of average college debt at $31,497. Minnesota was also ranked fourth highest among states with 70 percent of its class of 2012 graduating with debt.

Overall, 71 percent of 2012 graduates from four-year colleges nationwide held student loans, according to the Institute for College Access & Success research group, averaging $29,400—a 25 percent increase from the previous survey in 2008.

How this spills over on the economy is obvious in the trenches where people work on community and economic development and on housing issues, said Jim Erchul, executive director of the Dayton’s Bluff Neighborhood Housing Services on St. Paul’s East Side.

When Erchul started college, public universities in Minnesota were on a quarterly school calendar and tuition cost about $100 for the quarter. “It was $1,000 a quarter when I went to graduate school, a thousand percent increase,” he said.

Much later, when another member of his household started graduate school, the cost had gone up to $10,000.

Meanwhile, home values in most of Minnesota peaked in 2005-2006, with the subsequent collapse in the housing market nationwide triggering what has become known as the Great Recession. By 2013, the collapse meant $1 billion in home equity was wiped out in just the East Side of St. Paul where Erchul works.

There has been an uptick in home values in the past 18 months, he said. But this reversion to mean in home pricing has only recovered about half the lost home equity, still leaving a high percentage of home mortgages underwater and pinching homeowners’ abilities to do repairs and pay off other household debt. Whether this was ever good financial planning or not, home equity has been the leverage for would be entrepreneurs to start businesses that, in turn, create jobs and spur economic activity within communities. For these reasons, the broader economy has shared reasons why it is important for college graduates to get on with their lives, buy homes and ultimately start new businesses.

Sarah Strain, research and communications intern at Minnesota Housing Partnership, finds the financial world is taking notice. (See accompanying blog.) For instance, a Goldman Sacks study found that six to seven percent of grads have $50,000 in college debts, lowering their chances of home ownership; and that millennials paying 10 percent of monthly income on students loans have a 22 percent lower home ownership rate that their classmates.