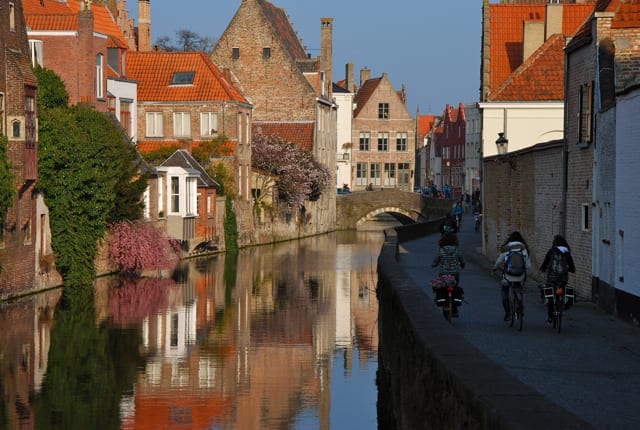 In the movie, “In Bruges”, Colin Farrell plays Ray, a rookie hit-man from Dublin. His boss (played by Ralph Fiennes) instructs him to lie low for a couple weeks in Bruges, Belgium after he botches his first job. Ray has never even heard of Bruges, and when he gets there, he’s not impressed, to say the least. Ray’s hit-man supervisor/mentor, Ken, (Brendan Gleeson) tries to get him to relax and enjoy the sights of this beautiful city. But Ray will have none of it. “Maybe that’s what hell is, the entire rest of eternity spent in f***ing Bruges”, he says at one point.

Sorry, Ray. I (and pretty much everyone who’s ever been there) beg to differ. King of the film critics Roger Ebert liked the movie, but also loved the city itself. “If the movie accomplished nothing else, it inspired in me an urgent desire to visit Bruges”, he wrote. 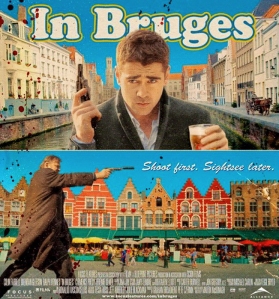 But Bruges is more than just a backdrop in the film. It’s used in such a way that it almost becomes one of the characters – the canals, the buildings, the art, the little bridges . . . and the light. The iconic bell tower in the central square is the setting for a pivotal event. They all become part of the plot. It’s not just a movie set in a beautiful old city. It’s a movie in THIS old city, and it keeps reminding us of that. As Ebert wrote, the movie “shows us a breathtakingly beautiful city, without ever seeming to be a travelogue.”

We arrived at the Bruges/Brugge (French/Flemish language issue again, but unlike Brussels, people here speak Flemish) train station shortly before noon on a bright, sunny Monday. The station is just outside the edge of the old walled city and a leisurely 25 minute walk from the center. My first look at the Markt, or central square literally gave me a chill, it was so beautiful. It looks like a . . . well, a movie set.

But the fact is, the whole town is just the way it should be. It’s the way I want Europe to be. Bruges is what Europe looks like in my dreams.

One of the many stone bridges (photo by Steve Date)

We’re now at the point where you, a seasoned and jaded traveler, might say, “But what about all the tourists? Isn’t it overrun with crass, obnoxious, souvenir hounds?

The answer is, “I don’t care”. Ever been to Venice? The whole city is tourists. Even the people who live there are mostly employed in a tourism-related way. But I don’t care, because the place is so damn unique and stunningly beautiful. The fact is, tourism brings money. In old cities, money brings preservation and tends to keep out the riff-raff. (I actually enjoy a little riff-raff now and then, which you’ll hear about in my next post about Amsterdam).

But not here. Please keep Bruges the way it is. Maybe it seems like an artificial Disneyfied version of a European city to you, but it isn’t. This place is real. Real people live here. They graciously share their city with us and use the money we spend to keep it up, almost as a living museum of history.

A woman bikes home from work (Photo by Steve Date)

We got even luckier with our hotel here than we did in Brussels. For about the same price (€75 a night) we had a wonderful, large room at the Hotel Bourgoensch Hof. It had a big bay window over looking a beautiful intersection – breakfast included. The other side of the hotel has canal views – take your pick.

The view from the courtyard outside our hotel, the Bourgoensch Hof (photo by Steve Date)

Morning view from our bay window. (photo by Steve Date)

This is the hotel breakfast room. Not a bad way to start the day. (photo by Steve Date)

The old city centers in Europe are an interesting mix of old and new. Don’t be fooled by the ancient exteriors. Many of these very old buildings contain modern technology and cutting edge fashion and design in a way we don’t see as much in the U.S. And although Bruges has picture postcard views at every turn, the residents are modern, young, hip families. I love watching the people who live in these places going about their lives. Sometimes the tourists get in the way, but if you dig just a little deeper and stray a little from the usual tourist sites, the visitors either blend in or disappear.

For me, what really makes this city seem alive is the young people – always riding bikes, always smiling, as if they continually feel the same exhilaration about their city as I do.

Some of the guide books say that Bruges is expensive. It’s not, if you’re careful. Some say it’s not worth more than a day or two. Not true again. We were there for 3 nights and didn’t feel close to being maxed out. Personally, I could stay there for a very long time.

Other than “just” walking around, we also took one of those hokey boat rides around the canals that turned out to be not hokey at all. Our boat guide did the tour in 3 languages and was very informative.

You get a different perspective from canal-level. (photo by Steve Date)

We also did the tour of the Halve Maan brewery, which was entertaining as well as educational. It’s a family business and the only remaining active brewery in Bruges. Our guide was an animated, comedic guy who made the whole thing very fun. This small brewery makes a couple of the 780 brands of beer sold in Belgium.

Our Halve Maan brewery tour guide cracking jokes on the rooftop deck of the brewery. The view is stunning from up there. (photo by Steve Date)

One afternoon we rented bikes for four hours. After riding around town for an hour or so, we decided to take a trek outside the city. We didn’t have a map, but knew that the seaport called Zeebrugge was something like 15 kilometers away, so we tried to make a run for it. It was a beautiful ride, but we made a couple of wrong turns that ate up some time. We didn’t make it quite to the ocean before we had to turn around to make sure we got the bikes back in time, but we came pretty close. It was great getting out into the countryside. I’d highly recommend a bike ride like this if you have time.

Biking a few miles north of Bruges on the way to Zeebrugge, the seaport. 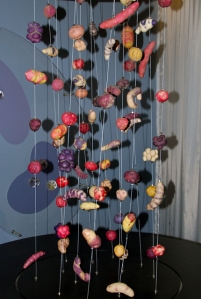 Exhibit of different types of potatoes at the Frietmuseum bears an odd resemblance to a window display in the Red Light District of Amsterdam that you’ll see in my next post.

We also went to the Friet (Frites) Museum. It’s a nice little place housed in a former church and a great idea for a museum. You probably know that pommes frites, what we call “French Fries”, actually originated in Belgium. The story goes that American soldiers in WWI met Belgian soldiers who showed them this newfangled way of cooking potatoes and they brought the idea back to the states. Because the Belgian soldiers were speaking French, the Americans misnamed the frites as French Fries. 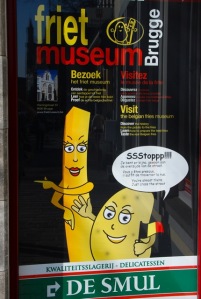 At the Frietmuseum you’ll learn more than you ever thought there was to learn about potatoes and how to fry them – not to mention how healthy fried potatoes are to eat! If you’ve ever wondered what the perfect french fry tastes like, this is the place to find out. You’ll get a coupon for 50 cents off a more-than-supersize bag of frites in the basement cafeteria. Two people can make a meal of one serving for about 2 bucks.

I haven’t told you about the beautiful Stadhuis (Town Hall) museum, the Bell Tower, the chocolate shops, the Basilica of the Holy Blood, the Wednesday market, the windmills or a bunch of other stuff yet. You’ll have to do some things yourself, I guess.

There was one thing I thought I’d see and thankfully never did – a t-shirt, coffee mug, bottle opener or any other souvenir that said “F***king Bruges” on it. Colin Farrell says it so many times in the movie that it becomes etched in your brain as part of the name.

Colin, (or to be fair, “Ray”) if you read this, I have to respectfully take issue with your assessment of this place. I can’t think of too many places I’d rather spend a couple of quiet weeks.

So reluctantly, we left Bruges and it was on to Amsterdam. Look for part 4 of this series of posts in a few days.

(For many more of my photos than you’ll ever want to see, visit my Flickr set about Bruges here.)

p.s. Here are a couple more snapshots. I couldn’t resist.