It’s only a slight decline, but Minnesota road fatalities resumed their decade-long downward trend last year, according to preliminary figures from the state Office of Traffic Safety. With 376 deaths reported so far and a projected total of 385 when all the numbers are in, a small improvement from 2012’s 395 looks likely.

Except for motorcyclists, all other Minnesota road users — drivers, bicyclists and pedestrians — suffered fewer fatalities last year than in 2012. Motorcycle deaths were up five to a total of 60, a continuing trend that should argue for renewing the state’s long-repealed helmet law. Helmets aren’t a foolproof safeguard, as my daughter learned with the loss of a close friend in a cycle crash last year, but they greatly reduce the risk of serious injury.

The latest figures, plus reports of record low highway carnage in 2013 from many other states, should put to rest the idea that fewer fatalities were due mainly to reductions in commuting and driving in general in the wake of the Great Recession. That was a weak theory anyway, given that significant drops in motoring and deadly collisions began years before the onset of hard times. Thankfully, Minnesota is back to pre-recession levels of unemployment and still the roads are getting safer.

As reported before, the likeliest explanation for the uptick in deaths in 2012 remains that winter’s exceptionally mild weather, which lured more people onto the roads. Climate change probably will produce repeats of that warm year in the near future, but for now traffic safety may be the only good argument for polar vortexes. Indeed, as of Tuesday the state’s online fatality ticker showed one fewer death in 2014 than at the same time the year before. 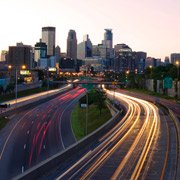 It’s easy for me to say from my seasonal outpost in the subtropics, but — along with less drunken driving, speeding, seat-belt nonuse and distraction behind the wheel — maybe Minnesotans should hope for more frigid winters.