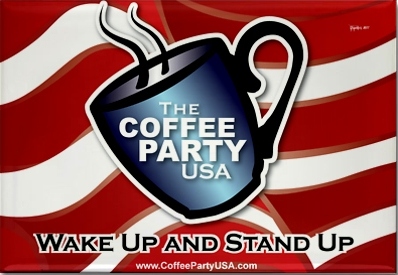 Almost a year ago the tea party movement mobilized citizens to political action. Now, the Coffee Party has kicked off. The Coffee Party may sound like a would-be opposition party to the Tea Party – and it has been portrayed as such by the New York Times, the Washington Post, and elsewhere (The Week has a good roundup of articles) – but some of its Minnesota supporters say that its purpose is much deeper than just being an opposition party.

It started as a visceral reaction to the Tea Party approach. Annabel Park was angry at their approach of “us against the government,” and she proposed an alternative: “Let’s get together and drink cappuccino and have real political dialogue with substance and compassion,” she wrote on her Facebook page in January. Park has actively encouraged citizen cooperation before, and highlighted an example of countering divisive rhetoric in her film “9500 Liberty.”

Park’s ideas caught on, and, by March 4, the Coffee Party’s Facebook page had more than 80,000 fans. Its official website has a list of chapters including a Minnesota chapter with 71 members.

The Minnesota chapter’s kickoff event was on February 28 in St. Cloud. Tom Horner was among the participants. Hormer is a candidate for Governor running for the Independence Party.

“It’s encouraging how quickly this has caught on,” he said. He emphasized that the Coffee Party is not a reaction to the Tea Party movement, but rather a reaction to the political environment. “Most people are too busy to have a political conversation, and these meetings are opportunities for people to hang out and have a serious, civil conversation about current events.”

Horner was the press secretary and later chief of staff of former U. S. Senator David Durenberger. “We used to have political conversations like this,” he said. “Not so much on the floor, but in committee hearings, and other meetings, and we really don’t have those any more.”

Also attending the kickoff was Bill Mech, a graduate student at Bethel College. Mech says that what he likes about the Coffee Parties are that they are less “categoristic” and that it appealed to him.

Mech ran for a place on the county board in Wabasha County in Wisconsin, but didn’t like the partisan atmosphere he encountered. “It seemed like when I became involved with party politics it became partisan,” he said, “and it seemed like they wanted you to toe the party line rather than have your own ideas.”

Mech is also quick to add that the Coffee Party is not trying to align itself with any political party. “I think that we are wary of what appears to be happening with the Tea Party, that the Republican Party is trying to corral it,” he said. “We would like to keep this open to multiple political view points and not be agenda-driven, but dialog driven.”

The Coffee Party is planning to hold meetings around the country as a national kick-off/introduction to the movement on March 13th. While members have said there are events scheduled in the Twin Cities area, none of them have been posted yet.