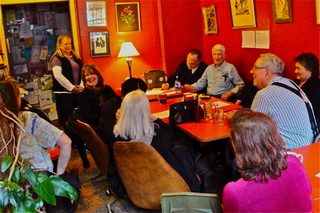 Coffee is for me, the elixir of the Gods, so it should be no surprise that I had to participate in the grand starting day of the Coffee Party movement, starting at noon at my favorite coffee shop. The Coffee Party has the outrageous idea that government is good and not the enemy of the people. And in fact, we could cooperate and create better government. Everyone is asked to take the civility pledge:

As a member or supporter of the Coffee Party, I pledge to conduct myself in a way that is civil, honest, and respectful toward people with whom I disagree. I value people from different cultures, I value people with different ideas, and I value and cherish the democratic process.

The Coffee Party has on Facebook over 184,900 fans while the Tea Party Patriots only have 143,070 fans. However, those of us who paid attention when the Tea Party started, can see the heavy influence of corporate funding with the primary aim of disabling government from being able to control corporations. So the strident emotional tone of the Tea Party movement is deliberate.

Now a real grassroots movement, the Coffee Party is meeting with the deliberate aim of putting civility back into our discourse of government. Corporate-owned news is probably going to ignore the Coffee Party.

So my Coffee Party meeting was mostly neighborhood activists. The discussion centered around “What are our goals?” — which seemed to be maintaining civil discourse while yet still making a difference. The discussion evolved to while maybe we cannot change a Glenn Beck or Michele Bachmann, maybe we can we change a friend or relative. Perhaps one can affirm the person, while still disagreeing on a civil basis. Can friends disagree on political ideas and still be friends? The group decided to meet again, to develop rules and structure and to join with other groups in activities.